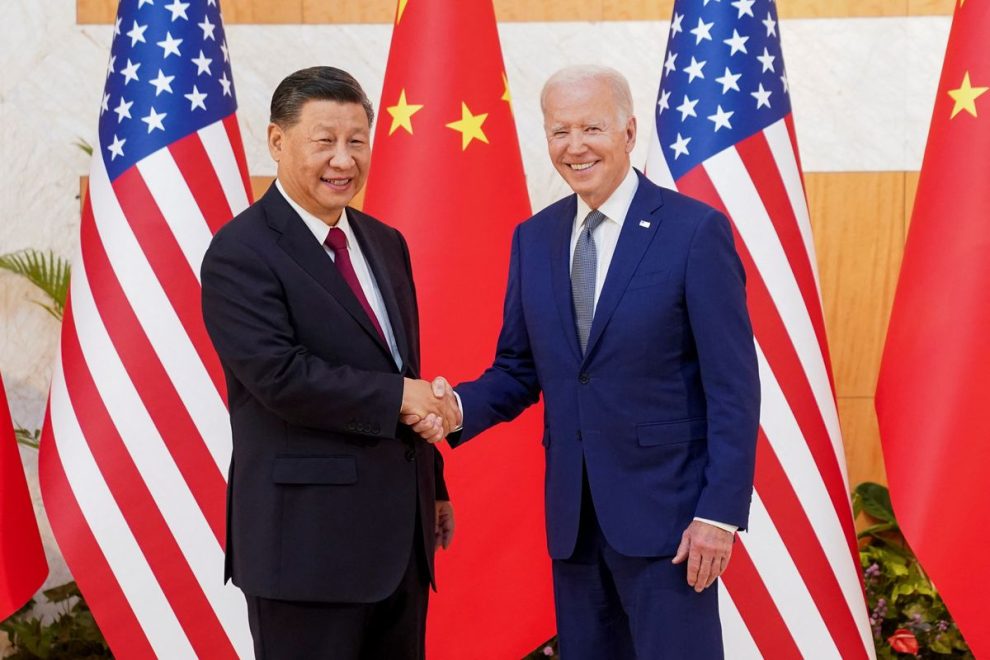 Biden noted at the beginning of the meeting he spent a long time with Xi when they were vice presidents but had not seen him in person in a while.

“I believe there’s little substitute, though, for to face-to-face discussions,” Biden said, recalling their “candid” relationship with each other.

He said he hoped that China and the United States would work together on global issues of climate change and food insecurity to manage their ongoing “competition” with each other as nations.

“The United States stands ready to do just that — work with you — if that’s what you desire,” Biden said.

But neither leader mentioned in their opening remarks, the coronavirus pandemic that came from China, the reason for both leaders spending so much time apart.

Xi noted that he had not met in person with Biden since the 2017 World Economic Forum in Davos, five years ago.

This is only Xi’s second international trip since the coronavirus pandemic.

China continues maintaining strict lockdowns in some of its major cities to battle the spread of the virus.

Xi noted that the world was dealing with challenges, but focused on the relationship between the United States and China.

“Humanity are confronted with unprecedented challenges,” he said. “The world has come to a crossroads. Where to go from here — this is a question that is not only on our mind but also on the mind of all countries.”

Biden spoke with Chinese dictator Xi Jinping in a video call on Friday, as Russia continues escalating its war in Ukraine. https://t.co/QGOuU0YmZx

Xi also referred to the 50-year relationship between China and the United States, noting both countries had learned lessons and grown as a result.

China has continued a more aggressive approach to Taiwan and Biden has signaled the United States would be willing to help defend the country, even though the White House has repeatedly walked back the president’s statements.

Taiwan is a sovereign, democratic country off the coast of China, independent of Chinese rule.

Xi noted during his two-hour speech at the National Congress of the Communist Party of China that Taiwan must recognize China’s rule over their country.

“Resolving the Taiwan question is a matter for the Chinese, a matter that must be resolved by the Chinese,” Xi asserted, calling for “peaceful reunification.”

But during his opening remarks with Biden, Xi did not mention Taiwan either, choosing more diplomatic phrases.

“I look forward to working with you, Mr. President, to bring China-U.S. relations back to the track of healthy and stable growth to the benefit of our two countries and the world as a whole,” he concluded.

Xi and Biden met for about three hours before exiting the location.

After the meeting, the White House released a readout of what was discussed but again made no mention of the pandemic.

“The two leaders spoke candidly about their respective priorities and intentions across a range of issues,” the readout read.

On Taiwan, the White House reiterated that “our one China policy has not changed” but that Biden raised “objections” with “coercive and increasingly aggressive actions toward Taiwan.”