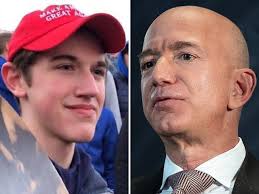 “The Post wrongfully targeted and bullied Nicholas because he was the white, Catholic student wearing a red ‘Make America Great Again’ souvenir cap on a school field trip to the January 18 March for Life in Washington, D.C. when he was unexpectedly and suddenly confronted by Nathan Phillips (‘Phillips’), a known Native American activist, who beat a drum and sang loudly within inches of his face (‘the January 18 incident’),” the lawsuit filed by lawyers Todd V. McMurtry and L. Lin Wood in the U.S. District Court for the Eastern District of Kentucky reads.

Here is the Complaint filed today against The Washington Post on behalf of Nick Sandmann. All members of the mainstream & social media mob of bullies who recklessly & viciously attacked Nick would be well-served to read it carefully. https://t.co/P3H4x0srlX

Twitter
See also  Adam Kinzinger 'Drunk-Tweets' His Way Into Total Embarassment
→ What are your thoughts? ←
Scroll down to leave a comment: