Many have speculated that television audiences will watch NFL players kneel in protest this season while the anthem singers sing and the colors are presented by military or police honor guards.

Well, it now appears as though television viewers will only see protesters.

According to a report Michael McCarthy of Front Office Sports, part of the NFL’s coronavirus mitigation strategy will be to not have on-field anthem singers this year, and the use military/police honor guards could be curtailed as well.

The ‘Star-Spangled Banner’ will still be played before each NFL game, said sources. But the anthem will not be performed live, such as the annual Super Bowl anthem performance most recently sung by Demi Lovato before Super Bowl LIV in February.

Instead, the league’s 32 teams may ask performers to sing the anthem off-site, then pipe it live inside their stadium, or have singers pre-record the anthem elsewhere, then play their rendition before kickoff.

“This year will be different due to COVID concerns. They want to limit the number of people around the players on the field,” a source to Front Office Sports said.

The NFL did not respond to a FOS request for comment.

So, to recap, the NFL will allow hundreds of their players to hit and tackle each other in (obviously) close proximity. In addition they will allow those players to travel and live together as they play the season. However, someone standing by themselves in the middle of the field singing the anthem with no one within ten feet of them, is apparently a bridge too far.

Other offseason changes that viewers can expect to see this season, in addition to the reported removal of any semblance of patriotism from the football field, include:

social justice messages stenciled on the field
social justice helmet decals on the football field
and the song, “Lift Ev’ry Voice and Sing,” also known as the Black national anthem, sung prior to each Week 1 game (presumably a recording and not a live singer given the league’s apparent anthem stance, but at this point, who knows?)
And of course, let’s not forget. After a full season of no on-field singers and no honor guards, the leftist sports media and the social justice warriors within the NFL itself will use the opportunity to claim that the game was actually better without the anthem and that it should be scrapped entirely.

In other words, if the NFL follows through with this, don’t be so sure that the anthem is ever seen in major American professional sports ever again.

The NFL season begins on September 10th when the Chiefs take on the Texans. Though, the season will likely end for many fans after that time when the NFL used to reserve for “Honoring America.”

These Are The House Republicans Who Voted With Trump On Both The NDAA Veto And $2,000 Stimulus Checks 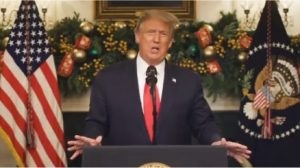