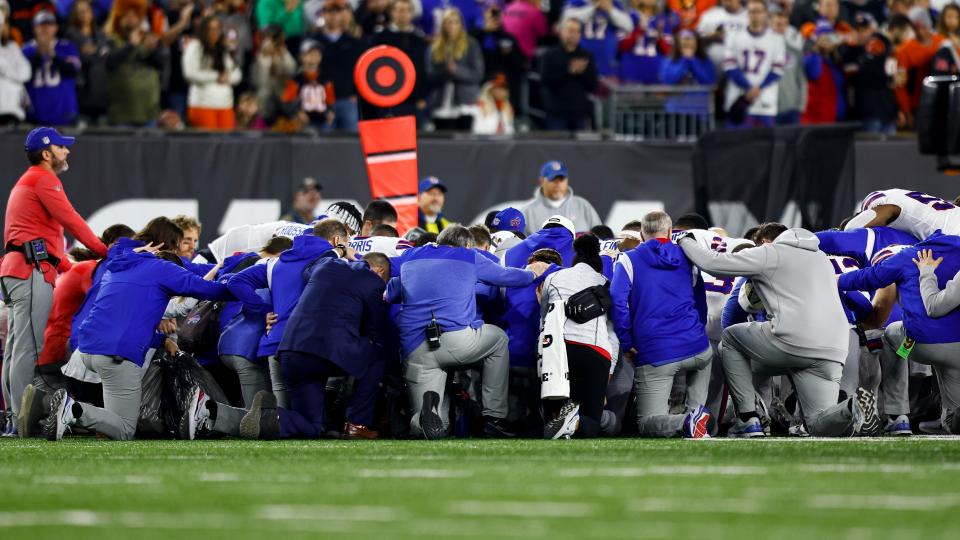 The NFL will not resume the Bills-Bengals game that was suspended Monday night after Buffalo safety Damar Hamlin collapsed and went into cardiac arrest on the field, two people familiar with the decision told The Associated Press on Thursday.

Both people spoke to the AP on condition of anonymity because the league is still figuring out how to determine playoff seedings and scheduling.

The Bengals (11-4) had a chance to earn that top seed with two more wins and a loss by the Chiefs.

NFL.com reported the following playoff-clinching scenarios if the game was canceled:

Bengals clinch AFC North, but would not have a path to the No. 1 seed and home-field advantage (Ravens cannot clinch division even if they beat Bengals in Week 18 because an 11-5 Cincinnati team would best an 11-6 Baltimore).

• Chiefs can clinch the AFC’s No. 1 seed with a win Saturday (Chiefs would be the only team capable of reaching 14 wins).

• Chiefs would also clinch the No. 1 seed if the Bills lose vs. the Patriots in Week 18.

• Bills can clinch the No. 1 seed with a win vs. the Patriots + a Chiefs loss at the Raiders in Week 18.

• Bengals can clinch the No. 2 seed with a win vs. the Ravens + a Bills loss vs. the Patriots in Week 18 (would go to strength of victory tiebreaker).

Hamlin, whose frightening injury prompted a wave of support and prayers across the nation, “has shown remarkable improvement over the past 24 hours,” the Bills said in a Twitter post on Thursday morning.

“While still critically ill, he has demonstrated that he appears to be neurologically intact. His lungs continue to heal and he is making steady progress.

“We are grateful for the love and support we have received.”