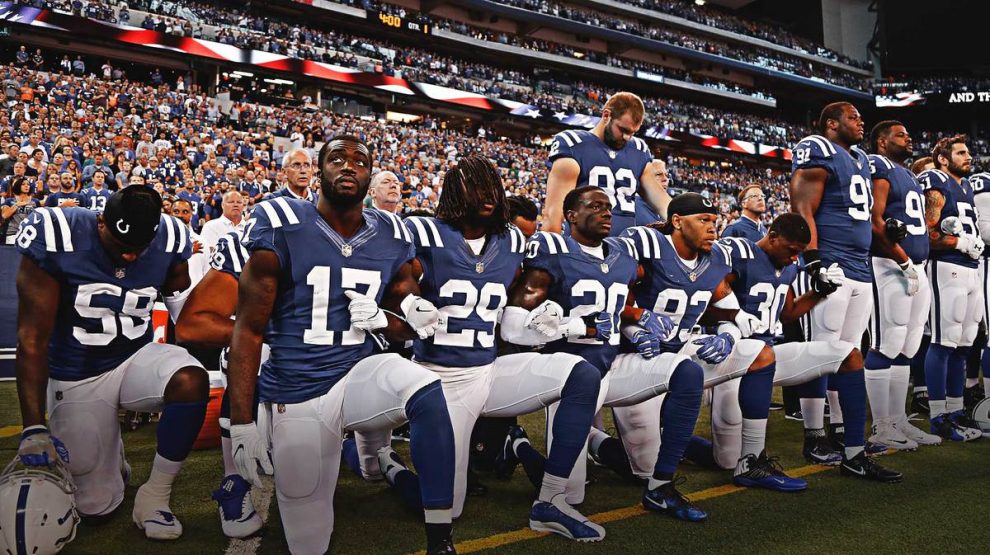 NFL end zones will be inscribed this season with two slogans: “It Takes All Of Us” on one end line, “End Racism” on the other.

As part of its social justice awareness initiatives, the NFL also will allow similar visuals on helmets and caps.

Previously announced were decals on the back of helmets, or patches on team caps, displaying names or phrases to honor victims of racism and/or police brutality.

“Each player will have the option to honor an individual by displaying that person’s name via a decal on the back of their helmet,” the memo said, according to ESPN.

“Players will be offered a list of names and short biographical information to help guide their decision-making, however, they can also select a victim of systemic racism who is not represented on this list.”

Coaches will also be allowed to display patches on their hats.

During pregame ceremonies, a recorded performance of “Lift Ev’ry Voice and Sing,” known as the Black national anthem, will play.

Video montages of NFL players’ and clubs’ social justice work will air at the same time.

According to the memo, the NFL has “engaged the James Weldon Johnson Foundation (the song’s author) and the NAACP to work with us to inform and educate fans about the historical significance of the song during the weeks leading up to kickoff, and will utilize the NFL’s owned and operated channels to share as broadly as possible.”

Now, a T-shirt designed by NFL Players Association executive committee member Michael Thomas, a safety with the Houston Texans, can be worn in warmups.

The back says reads: “End racism.”

Players can choose either a name of a victim or one of four preferred phrases the NFL has approved:

The same choices are available for coaches and on-field officials.

Each week, the NFL will feature the story of a victim of social or racial injustice or police brutality and tell that person’s story “in and around” the games, the league said.