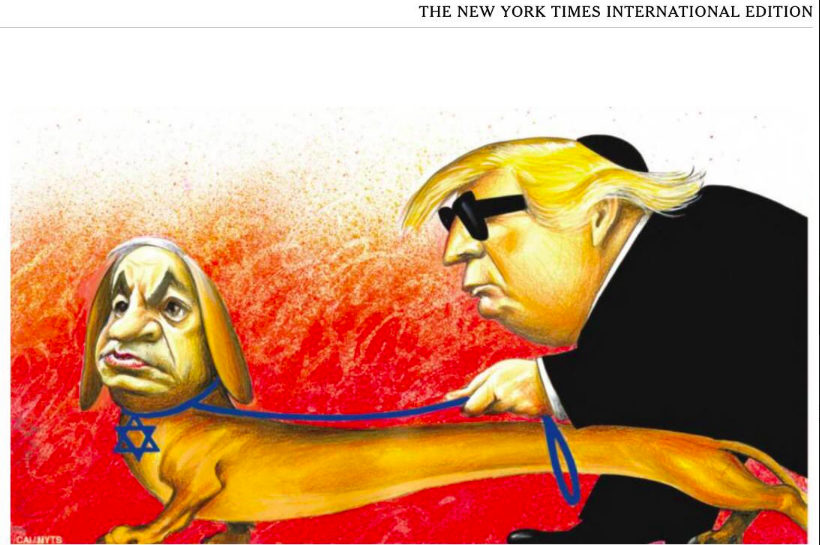 As of now, it appears the New York Times has not fired or in any way held anyone accountable for its decision to publish an antisemitic cartoon in its international edition.

The New York Times is not being transparent with its audience or the public when it comes to who exactly in its newsroom was responsible for publishing in its international edition an antisemitic cartoon that it has since retracted, deleted, and apologized for. The Times also refuses to answer whether anyone in its newsroom is being or has been held accountable, what exact accountability measures are being or have been taken, and whether there will be any reforms to prevent future publication of antisemitic material.

The Times published a cartoon on Thursday in its international edition that portrayed Israeli Prime Minister Bibi Netanyahu as a dog leading a blind President Donald Trump, wearing a skull-cap, around. It includes a Star of David around the dog-version of Netanyahu’s neck, attached to a leash and collar.

A political cartoon in the international print edition of The New York Times on Thursday included anti-Semitic tropes, depicting the prime minister of Israel as a guide dog with a Star of David collar leading the president of the United States, shown wearing a skullcap. The image was offensive, and it was an error of judgment to publish it. It was provided by The New York Times News Service and Syndicate, which has since deleted it.

While the Times is retracting the cartoon, admitting that it was antisemitic and an “error judgment to publish it,” the Times is not being transparent about who exactly was involved in making that error, whether any accountability at all has been delivered, and whether there will be changes in the Times‘ judgment.

Danielle Rhoades-Ha, a Times spokeswoman, did not respond to three detailed questions from Breitbart News asking in particular for specifics on everyone at the Times involved in publishing this material, what particular decisions each person made, whether there have been any consequences, if so what those consequences are exactly, and perhaps most importantly what procedural reforms will be implemented–or not–in the newsroom so this does not happen again.

“This was done on the final day of Passover,” one former White House official told Breitbart News. “Coincidence?”

There has been a rise in antisemitism on the left and in the Democrat Party with the election of Reps. Ilhan Omar (D-MN) and Rashida Tlaib (D-MI), two freshmen Democrat Muslim congresswomen who are very outspoken against Israel and have caused their party’s leadership major headaches with a number of antisemitic comments both have made. Interestingly, all this comes in the wake of years of criticism of Trump over antisemitism, and false claims by many in media and by many Democrats that Trump and his staff were somehow antisemitic. But the real antisemitism seems to be emanating from the Democrats and their allies on the left, like the New York Times.

“There isn’t an increase in antisemitism because of Trump’s rhetoric,” the former White House official added. “It’s because people see stuff like this in the media and think it’s ok.”

What’s more, noted critics of President Trump on this front–like CNN’s Jake Tapper–have been noticeably silent when it comes to the admittedly antisemitic content published and since retracted by the New York Times. Tapper finally, hours after the Times statement, retweeted a Jewish organization panning the Times for the lackluster statement, but has, as of this publication, still not said anything on his own about the incident–despite tweeting up a Saturday storm about the White House Correspondents’ Association (WHCA) dinner on Saturday evening among other matters.

Apology not accepted. How many @nytimes editors looked at a cartoon that would not have looked out of place on a white supremacist website and thought it met the paper’s editorial standards? What does this say about your processes or your decision makers? How are you fixing it? https://t.co/HD5LdeZ9z3

Brian Stelter, the media host at CNN who anchors Reliable Sources on Sundays, also was reluctant to condemn the antisemitism from his former employer the New York Times.

Worth noting that @jaketapper & @brianstelter, who love talking about dog whistles, haven’t said a damn word about this graphic in the New York Times. Never take Jake or Brian seriously. pic.twitter.com/6w7LYJEjJI

Update: Stelter was shamed into retweeting someone else’s commentary on the NYT’s anti-Semitic imagery. Still nothing from Tapper. https://t.co/ADxGxbbIBi

Update: Stelter was shamed into tweeting something himself after this. Still nothing from Tapper. https://t.co/Y1smiUX9wj

Media organizations have in recent years been much less likely to make real structural changes or actually hold their staff accountable, as was tradition for those who believed in journalistic integrity in years past. Typically, when major scandals would hit the media like this one has, news organizations would go above and beyond to publish for their audiences a full accounting of what went wrong, who was responsible, and what was being done to prevent similar mistakes in the future.

For instance, when it was exposed that Jayson Blair had fabricated stories for the New York Times repeatedly, the Times ran a full front page investigation into the matter. But, now, media organizations seem to react with a crisis communications-issued press statement and attempt to weather any criticism without being honest or transparent about the mistake–exactly the play the Times is engaged in right now.

It remains to be seen if the Times will change course and be transparent with its audience and the public about what went wrong and who was responsible, or if the organization will dig in further and refuse to answer questions about it. For now, Rhoades-Ha is silent.