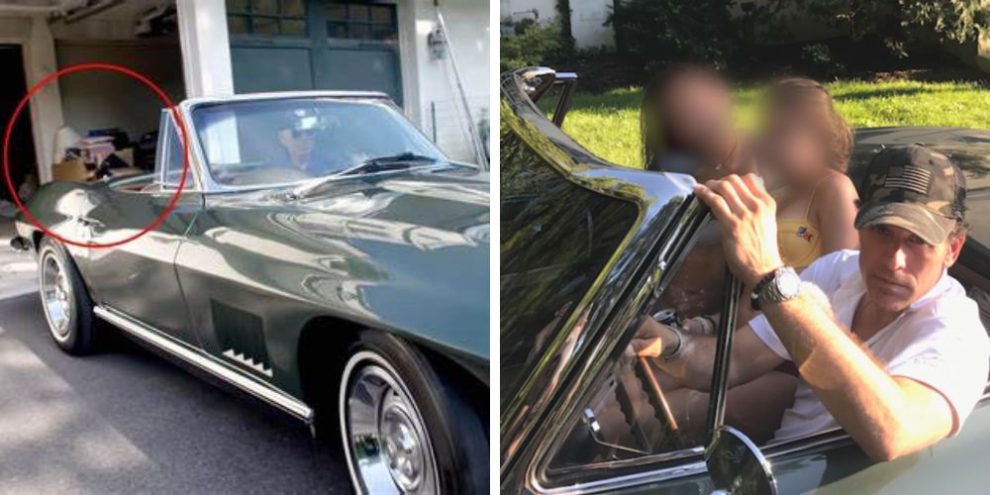 Hunter Biden had access to the Goodwood Green 1967 Corvette Stingray that his father President Joe Biden kept in the garage of his Delaware home where he improperly stored top-secret government documents, according to a new report.

The Washington Free Beacon reviewed Hunter’s infamous abandoned laptop and discovered four photographs of the First Son behind the wheel of his father’s Corvette. In the photos, Hunter is in the 2-seater car beside two girls, one who could not be identified, and the other appears to be his then-12-year-old niece, Natalie Biden.

Former Secret Service agent and certified cyber forensics expert Konstantinos Gus Dimitrelos verified the authenticity of the images and data using GPS metadata embedded in the photos showing they were taken on an iPhone outside the 6,850-square-foot Wilmington, Delaware, home within a minute of each other at 6:49 pm on July 30, 2017.

Hunter was negotiating a business deal with the now-defunct Chinese energy conglomerate CEFC, which was closely tied to the Chinese government at the time the pictures were taken, according to the outlet.

Emails from the laptop showed that Hunter’s consulting firm, Hudson West, and his father’s foundation shared a Washington DC office with CEFC executives in 2017. In 2018 and 2019, CEFC also paid Hunter $6 million in consulting and legal fees. The Beacon previously reported that Hunter emailed the office building managers requesting that they “have keys made available for new office mates,” that included Joe and Jill Biden, his uncle Jim Biden, and former CEFC official Gongwen Dong on September 21, 2017.

Biden’s former business partner Tony Bobulinski previously claimed to have met with Joe Biden in person to discuss the Biden family’s Chinese business dealings in May 2017, less than three months before the pictures were taken.

According to CNN, sources close to the president have suggested that the transfer of the documents to Joe Biden’s home took place in January 2017, while he was closing his vice presidential office.

In May 2018, while he was addicted to drugs, Hunter listed his father’s home as his primary residence on a new Delaware driver’s license and instructed his Wells Fargo financial adviser to change his banking address to the home.

According to documents discovered by Miranda Devine of the New York Post, Hunter recorded monthly rent payments of $49,910 while living at his father’s residence. One document signed in July 2018 and titled “background screening request,” showed that Hunter paid $49,910 in monthly rent for one year while living at the Delaware residence and listed his rental tenancy from March 2017 to February 2018.

In 2018 Hunter Biden claimed he owned the house where Joe Biden kept classified documents alongside his Corvette in the garage Via @jj_talking pic.twitter.com/L7c80MRRiS

Hunter checked a box on the form claiming to own his father’s home. However, Joe Biden’s 2017 tax return on Schedule E only listed $19,800 in “rents received” and in 2018, he listed no rents received. In a Dec. 10, 2018 test message to his assistant Katie Dodge, Hunter instructed her to deliver the contents of a Virginia-based storage facility to a guest house on the Delaware property.

He also added the address of the residence to his PayPal account in January 2019 and a notarized deed found on the laptop dated February 19, 2019, identifying Hunter as a “divorced man, residing” at his father’s address.

Earlier this week, the White House admitted to not keeping visitor logs for the Delaware home, and at present, it remains unclear who else had access to the documents.

Following news of the documents being stored improperly at the president’s Delaware home and his former office at the Penn Biden Center, Attorney General Merrick Garland appointed former Maryland US Attorney Robert Hur as special counsel to investigate how the classified documents ended up in Biden’s private possession.