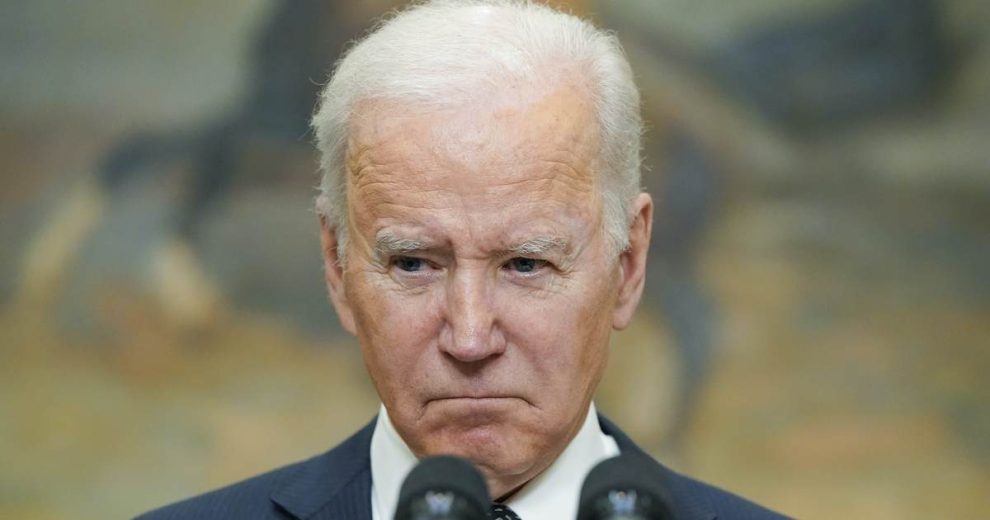 Whatever else Old Joe Biden may be, in his dotage, he sure has become a whiner. At the House Democratic Caucus Issues Conference on Friday, Biden lost his temper, shouting that he was “sick of this stuff,” that is, Americans blaming him for the inflation that his far-Left policies have caused. That wasn’t all that the ostensible president was enraged about, however; in the same speech, he fumed that Americans just didn’t understand the great job that he’s doing.

Biden opened this particular gambit with a full-on threat: “I’m not saying we’re over; we’re just getting going.” It’s quite clear at this point that the American people and the world at large would be a great deal better off if he didn’t do anything for the rest of his sorry term, but no such luck: his handlers are just getting started, and that means more pain is in the offing.

“And a lot of work to do,” Biden continued semi-coherently. “But never forget what we’ve accomplished together so far.” Oh, we won’t: hyperinflation, skyrocketing gas prices, war in Ukraine, a botched withdrawal from Afghanistan, the emboldening of America’s enemies worldwide, the erasure of the Southern border, unknowable numbers of criminals and terrorists streaming into the country — who could forget?

But as far as Biden is concerned, he isn’t riding high in the polls right now because the American people just aren’t capable of grasping his magnificence: “And, by the way, the American people just trying to stay above water don’t understand this. You tell them what the American Recovery Act was, and they look at you like, ‘What are you talking about?’ Understandably. They’re like my family: mom, dad, four kids, grandpop living in the house in a three-bedroom split-level home. Just every single day figuring out how you put enough food on the table, even when things are okay. Well — and on this one anniversary of the American Rescue Plan, let’s be clear: We did it alone, without one single, solitary Republican vote.”

Noted: the destruction of America has been accomplished so far without one, single, solitary Republican vote, at least in that particular instance. Unfortunately, on all too many occasions, Old Joe has not had trouble finding corrupt and compromised Republicans to go along with his nefarious plans.

But more striking is the bit about how struggling Americans “don’t understand” all the wonderful things he has supposedly done. As ridiculous as it is, this has actually become a Democrat talking point of late. As PJM’s Matt Margolis pointed out, House Speaker Nancy Pelosi (D-Absolut) said essentially the same thing on the day of Old Joe’s State of the Union rant. MSNBC’s Andrea Mitchell asked her, “The decline in the President’s polls — even on COVID, on how he’s handled it — what can you do to turn this around?” Pelosi answered, “Well, I think tonight’s gonna be very important. Because for people to appreciate what the President has done […] they have to know what it is.”

So both Joe Biden and Nancy Pelosi believe, or want us to think they believe, that the average American isn’t thrilled with Old Joe because they aren’t bright enough to inform themselves of all his great accomplishments.

It may be that Hillary Clinton was the first person to advance this absurd talking point. On MSNBC’s Rachel Maddow show on Nov. 23, 2021, Clinton lamented, “You know, democracy is messy. You know, a lot of people got, oh, I think, kind of frustrated looking at the messy process of legislation, and they — they didn’t really appreciate that within a year, the Biden administration has passed two major pieces of legislation through both the House and the Senate. They passed another major piece through the House that will soon be in the Senate.”

Hillary touted these as “extraordinary accomplishments,” and complained that “because of the way we are getting our information today and because of the lack of gatekeepers and people who have a historic perspective, who can help us understand what we are seeing, there is a real vulnerability in the electorate to the kind of demagoguery and disinformation that, unfortunately, the other side is really good at exploiting.”

Yes, that’s what we need: more gatekeepers to explain to us how great Joe Biden is, as if CNN and MSNBC and the New York Times and the Washington Post and Hollywood and academia and all the rest of it weren’t enough. They all tell us we must love Big Brother, and soon enough we will, or else.