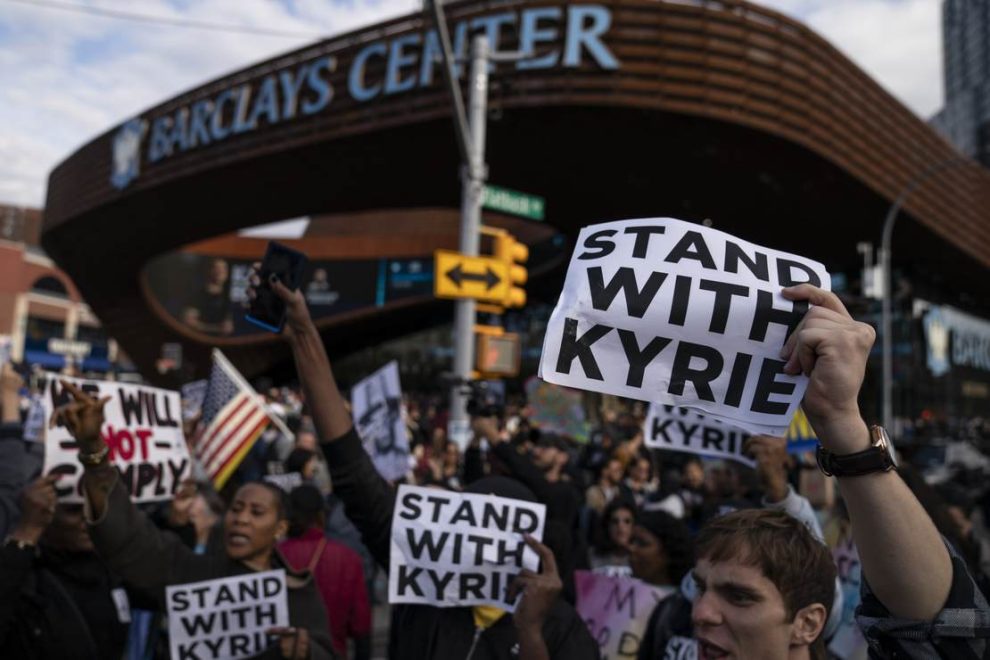 Brooklyn Nets superstar Kyrie Irving took to Twitter Tuesday to blast the COVID vaccine mandates which cost him almost a third of the season last year—and a reported $11.4 million—as he refused to get the jab despite intense public pressure and derision. New York City Mayor Eric Adams ended the private employer vaccine mandate on Tuesday, but not for city workers.They’re still required to get the injection. (On Sunday, I brought you the unbelievable story of how the Big Apple just fired over 850 teachers for not getting vaccinated. This despite a teacher shortage. Absolutely ridiculous.)

If I can work and be unvaccinated, then all of my brothers and sisters who are also unvaccinated should be able to do the same, without being discriminated against, vilified, or fired. ♾🤞🏾

This enforced Vaccine/Pandemic is one the biggest violations of HUMAN RIGHTS in history.

One of the things that has infuriated so many people during the pandemic is the often contradictory, nonsensical edicts issued by our authorities, whether it be Michigan’s order forbidding the purchase of seeds (huh?), or California’s order to close the beaches. (How stupid is that in retrospect?)

Irving was not allowed to play home games in New York City because of a vaccine mandate—but other players around the league were allowed to ball away for the season because their states didn’t have such repressive measures. In other words, Irving lost 29 games and over $11 million simply because of the fact that he’d signed with the Nets and not some other team.

The absurdity is off the charts; Irving must have thought he’d woken up in a Monty Python movie. (He’s probably too young to know who they are, but you get the point.)

Now that Irving is allowed to get on the court at Barclays Center, he’s not forgetting those that are left behind. He wrote in the above tweet:

If I can work and be unvaccinated, then all of my brothers and sisters who are also unvaccinated should be able to do the same, without being discriminated against, vilified, or fired. ♾🤞🏾

But then he really comes out swinging, declaring that pandemic mandates were an abuse of human rights:

This enforced Vaccine/Pandemic is one the biggest violations of HUMAN RIGHTS in history.

Although Irving suffered greatly for his decision to forgo the Emergency Use Authorized mRNA shots, he’s always maintained he’s not “anti-vaccine“; he just feels people should be able to make their own decisions without being forced to. ESPN gasbag Stephen A. Smith was among Irving’s harshest critics, saying in October 2021 that Irving’s stance was “some of the stupidest nonsense I’ve ever seen.”

Irving is not universally loved and likely has as many detractors as he does fans. Fellow iconoclast NFL quarterback Aaron Rodgers is also harshly critical of COVID mandate overkill as I wrote about last week. They, along with Novak Djokovic, have stood up against mandates at great personal cost. Many feel Irving is a kook because he’s talked about the earth being flat in the past and has a reputation as a difficult player. He decided to leave the Cleveland Cavaliers after winning a championship because he didn’t like being in the shadow of LeBron James; he went to the Boston Celtics but quickly wore out his welcome there, and then he went to Brooklyn where has been entangled in this vaccine controversy.

Amen. Say what you like about @KyrieIrving, he isn’t afraid to say what he thinks https://t.co/88vSN2QIl6

My take is very similar to the one I wrote when covering Aaron Rodgers, who recently said that California was “going to s***” because of harsh COVID policies. Both Irving and Rodgers are a little weird, and both have made mistakes in the past. Why I cheer for them is that despite their flaws, they’re saying what they really think in a time when so many people are hiding in the shadows, terrified of saying the wrong thing, freaked out that they might get “canceled.” Maybe it takes someone a little quirky to break away from the pack of sheeple and say, “look, folks, the emperor is not actually wearing any clothes.”