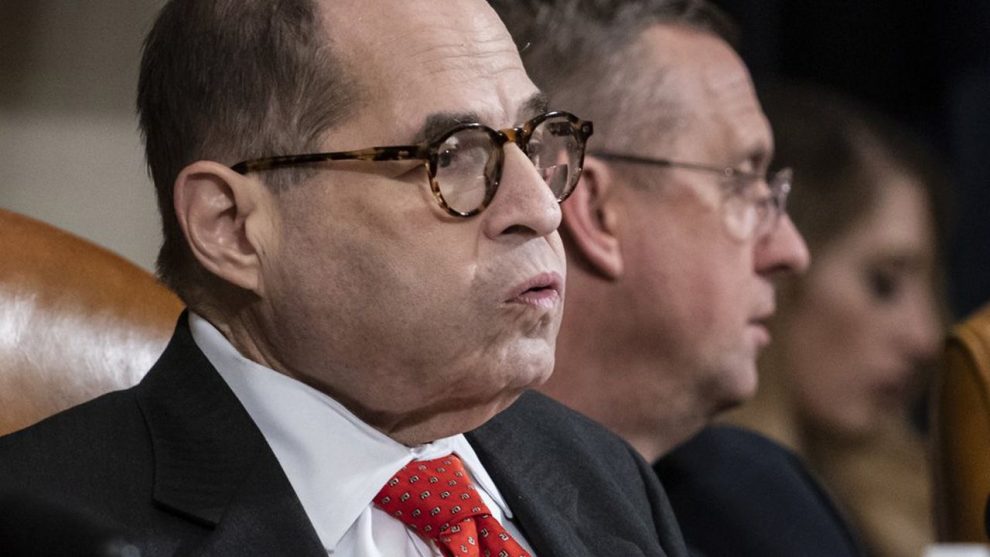 This is going to be pure, progressive pain — and no one deserves it more.

After New York state Democrats tried to gerrymander their way into one-party dominance with cheating so flagrant even a Democrat-dominated court couldn’t stomach it, new congressional districts in the Empire State are pitting longtime party “titans” against each other in battles for survival.

And Jerry Nadler could find himself out of a job.

Under new congressional district lines released by a special master on Monday, Nadler — the powerful, porcine chairman of the House Judiciary Committee, elected to Congress in 1992 — found himself moved out of the safety of his old seat and thrust into fighting a primary in a new district already represented by a Democrat who’s been in Congress as long as he has.

According to the New York Post, Nadler is going to be up against Rep. Carolyn Maloney, a New York City Democrat who entered the House in 1993.

And for the amusement of conservatives around the country, who watched Nadler waddle across the national political landscape for nearly two generations, the political blood-letting should be as entertaining as it gets.

Nadler, being Nadler and dripping with the kind of back-biting arrogance that has characterized his congressional career, launched the first volley, announcing almost immediately after the map was released that he’s running in his new district.

While griping that the new lines “violate NYS constitutional requirements” Nadler declared, in effect, that he’s going to try to oust Maloney if the lines are finalized on Friday.

And he did it, the Post reported, without even a courtesy call to Maloney. That might be passing strange behavior for a guy whose political party makes a such a show of its respect for women, but it’s par for the course. When the rubber meets the road, all a Democrat really cares about is power.

Maloney has made it clear she isn’t stepping aside for anybody, according to the Post. And she clearly didn’t like the idea of Nadler trying to bigfoot his way into pushing her out.

“I thought it was disrespectful. We’ve served together a long time. He’s running in my district,” she told the Post.

Actually, it’s no one’s district now. And Democrats have no one to blame for that but themselves.

Exercising its usual disdain for a truly democratic process, Democratic lawmakers, with the approval of Democratic Gov. Kathy Hochul, drew congressional maps that grossly favored their party. As the liberal New York Daily News reported, the maps would have given Democrats “ an advantage in 22 of the state’s 26 congressional districts.”

The state’s congressional delegation now is made up of 21 Democrats and seven Republicans, with one vacancy.

With Democrats now controlling the House by a handful of votes and the party expected to take a drubbing in the November midterms, the blatantly partisan map was essentially an attempt to steal enough congressional seats to limit or even prevent a potential Republican majority in the next Congress.

But in April, the state Court of Appeals, the highest court in New York, ruled the map was both unconstitutional and improperly adopted.

“The Democrats got what they deserved. They got too cute. You can’t yell ‘gerrymander!’ and then do it yourself in extreme fashion,” Arthur Schwartz, law chairman with the Manhattan Democratic Party, told the Post.

Considering that every member of that court was named by Democratic governors, as the Associated Press reported, that says not even partisan appointees could stand the stench of the steal.

Which brings the conversation back to Jerry Nadler and his loathsome brand of political opportunism.

This is the politician who stood in 1998 against the impeachment of then-President Bill Clinton on the grounds that elections should not be overturned, then enthusiastically supported and helped lead two impeachments against Trump — even acting as a House manager for the first in 2020.

This is the federal lawmaker who claimed the depredations inflicted on the nation by the terrorist thugs known as “antifa” are imaginary, but claimed that the justified acquittal of Kyle Rittenhouse on murder charges in Kenosha, Wisconsin, in November was “heartbreaking” and a “miscarriage of justice.”

These are just a few examples of Nadler’s transgressions against decency. Space and time would not allow for a full list, but anyone who’s followed American politics can probably reel off an example or two without trying.

This is a man, in short, whose moral compass, such as it is, exists solely to point to political goals. The fact that he’s been in a position of power for so long is itself a national disgrace. The fact that it’s entirely possible that it could be ended by the Aug. 23 Democratic primary in New York is nothing but good for anyone who cares about honesty in the federal government.

None of this is to say his presumptive rival in that race, Maloney, is anyone any conservative would cheer on. She’s currently the chairwoman of the House Oversight Committee, which has no interest in oversight when it comes to anything that might embarrass President Joe Biden or his White House. (Hunter Biden? Who’s Hunter Biden?)

In the run-up to November 2020, she used her position on oversight to stoke claims that the Trump administration was using the United States Postal Service to steal the election – in hindsight, a painful example of Democratic hypocrisy irony if ever there was one.

The Nadler-Maloney battle isn’t the only fratricidal campaign that’s going to be unleashed in New York, thanks to the redrawn map. (Politico has an in-depth look here.)

But it’s going to be the one conservatives can take the most amount of entertainment from.

In a lengthy, granular look at the Nadler-Maloney race published on Substack, New York City writer and political organizer Michael Lange wrote that Nadler’s congressional re-elections have been foregone conclusions since he entered the House, while Maloney has been challenged again and again.

Now, Nadler’s the one with the challenge, and he’s almost certainly going to have to sweat.

Manhattan Democratic Party leader Keith Wright summed it up succinctly for the Post.

“Jerry Nadler and Carolyn Maloney are titans,” he said.

And one of them is going to fall.

“I’ve never lost an election, and I don’t intend to start now,” Maloney told the outlet.

Maybe she will, maybe she won’t. And maybe the map released Monday won’t be final after all when Friday is finished.

“Jerry Nadler and Carolyn Maloney are titans,” he said.

And one of them is going to fall.

“I’ve never lost an election, and I don’t intend to start now,” Maloney told the outlet.

Maybe she will, maybe she won’t. And maybe the map released Monday won’t be final after all when Friday is finished.