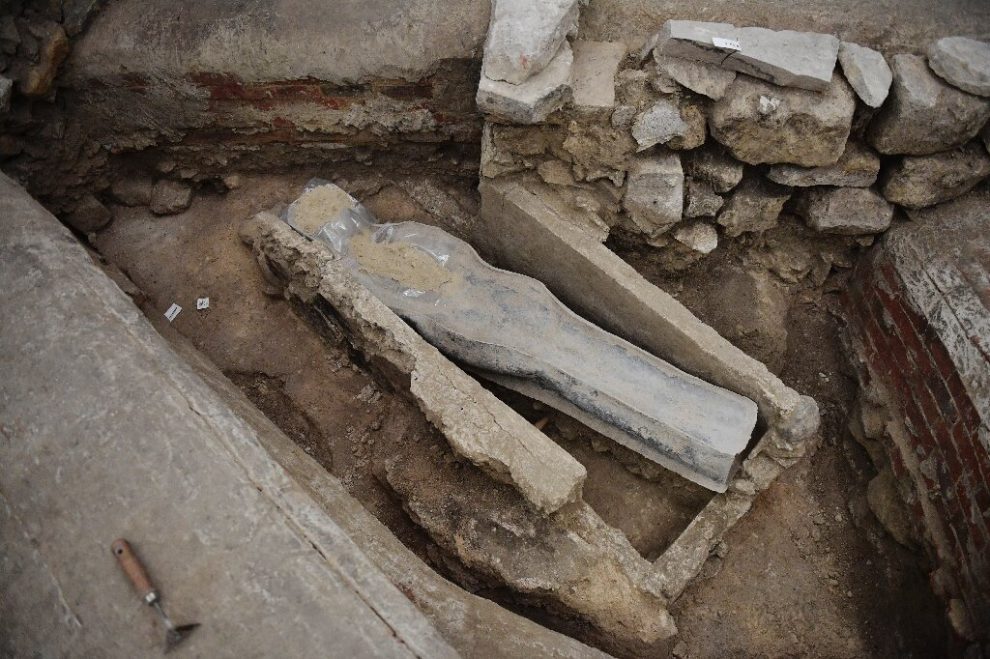 The announcement came a day before the third anniversary of the inferno that engulfed the 12th-century Gothic landmark, which shocked the world and led to a massive reconstruction project.

But the casket is believed to be much older – possibly dating to the 14th century.

Scientists have already peeked into the sarcophagus using an endoscopic camera, revealing the upper part of a skeleton, a pillow of leaves, fabric and as-yet unidentified objects.

The sarcophagus was extracted from the cathedral on Tuesday, France’s INRAP national archaeological research institute said during a press conference.

It is currently being held in a secure location and will be sent “very soon” to the Institute of Forensic Medicine in Toulouse.

Forensic experts and scientists will then open the sarcophagus and study its contents, to identify the skeleton’s gender and former state of health, lead archaeologist Christophe Besnier said, adding that carbon dating technology could be used.

Noting that it was found under a mound of earth that had furniture from the 14th century, Besnier said “if it turns out that it is in fact a sarcophagus from the Middle Ages, we are dealing with an extremely rare burial practice”.

They also hope to determine the social rank of the deceased. Given the place and style of burial, they were presumably among the elite of their time.

However, INRAP head Dominique Garcia emphasised that the body will be examined “in compliance” with French laws regarding human remains.

“A human body is not an archaeological object,” he said. “As human remains, the civil code applies and archaeologists will study it as such.”

Once they are done studying the sarcophagus, it will be returned “not as an archaeological object but as an anthropological asset,” Garcia added.

And could Notre-Dame, this unknown person’s home for so many centuries, serve as their final resting place?

INRAP said the possibility of “re-internment” in the cathedral was being studied.