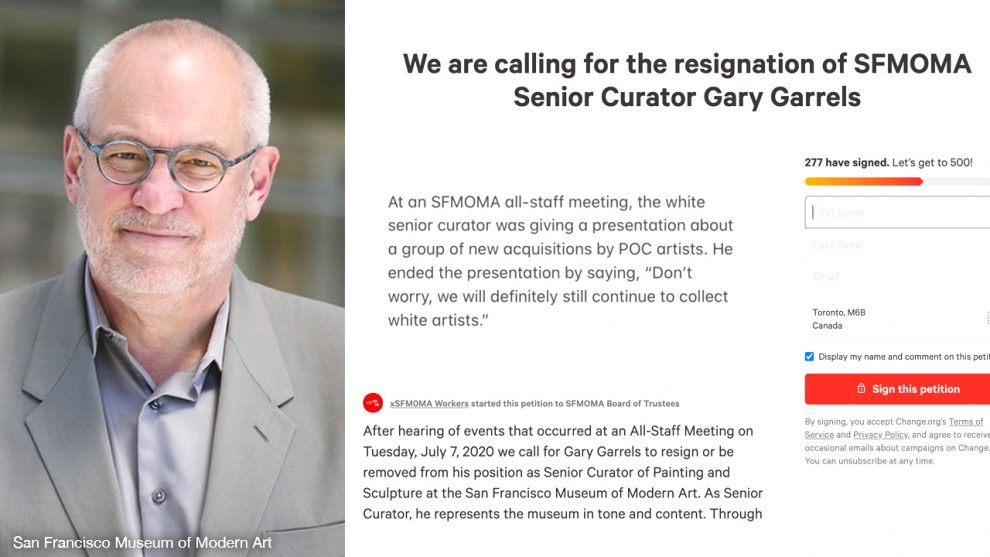 Until last week, Gary Garrels was senior curator of painting and sculpture at the San Francisco Museum of Modern Art (SFMOMA). He resigned his position after museum employees circulated a petition that accused him of racism and demanded his immediate ouster.

“Gary’s removal from SFMOMA is non-negotiable,” read the petition. “Considering his lengthy tenure at this institution, we ask just how long have his toxic white supremacist beliefs regarding race and equity directed his position curating the content of the museum?”

This accusation—that Garrels’ choices as an art curator are guided by white supremacist beliefs—is a very serious one. Unsurprisingly, it does not stand up to even minimal scrutiny.

The petitioners cite few examples of anything even approaching bad behavior from Garrels. Their sole complaint is that he allegedly concluded a presentation on how to diversify the museum’s holdings by saying, “don’t worry, we will definitely still continue to collect white artists.”

Garrels has apparently articulated this sentiment on more than one occasion. According to artnet.com, he said that it would be impossible to completely shun white artists, because this would constitute “reverse discrimination.” That’s the sum total of his alleged crimes. He made a perfectly benign, wholly inoffensive, obviously true statement that at least some of the museum’s featured artists would continue to be white. The petition lists no other specific grievances.

You might think that one of the most prominent art curators in the country—with 20 years of experience at SFMOMA—would be able to weather such a pathetically weak accusation of racism. But in the current cultural moment, it appears not. Garrels promptly resigned.

In a statement announcing his decision to step down, Garrels apologized for the harm his words caused, only slightly disputing the absurd charge against him. ” I do not believe I have ever said that it is important to collect the art of white men,” he said, according to artnet.com. “I have said that it is important that we do not exclude consideration of the art of white men.”

Suffice it to say that this is not the language of a white supremacist. Those who say otherwise—that Garrels is guilty of racism—have stripped the word of its potency. They have shown once again that the signatories of the recent Harper‘s letter were entirely correct that the progressive drive to purge lofty institutions of racism and sexism has frequently gone astray, in a manner that threatens both free inquiry and common decency. The 1793 Project continues.