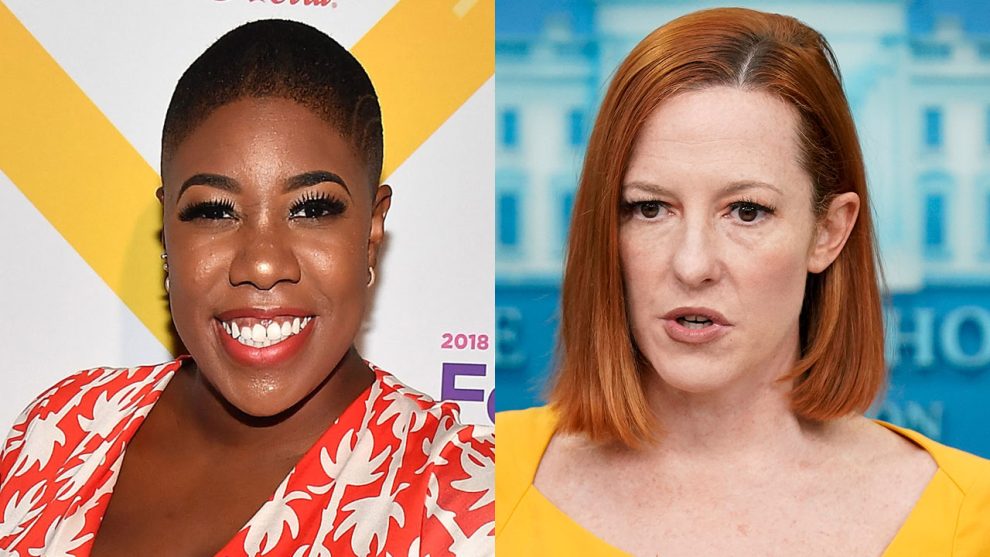 White House Press Secretary Jen Psaki is set to join MSNBC after she departs the Biden administration this week, but she won’t be the first Biden alumna to host a show for the network this year. She’ll hope to have a better start, though.

That honor goes to Symone Sanders, the former Kamala Harris aide whose highly publicized weekend MSNBC program debuted Saturday with only 361,000 viewers and a paltry 29,000 in the advertiser-coveted 25-to-54 demographic. She did even worse on Sunday, reaching just 344,000 total viewers.

In a recent interview with The Hollywood Reporter, Sanders insisted that as an MSNBC host, she will not be a “spokesperson for the Biden administration.”

While she may no longer be on the Biden payroll, her giddiness over her sit-down with Jill Biden suggests she still takes marching orders from 1600 Pennsylvania Avenue.

“I cannot think of a better first guess from my first show than the first lady of the United States of America,” Sanders told Biden at the top of the interview. “I’m very excited to talk to you about your life, your family, your work, your trip that you’re about to take.”

The softball questions Sanders asked ranged from the first lady’s upcoming visit to Ukraine, the ongoing Roe v. Wade drama, her teaching career, to how she handles “attacks” towards her family, all while Sanders showered her former boss’s wife with praise.

“Growing up, I often heard, ‘You really can’t have it all. You’ve gotta choose,’ but I think some people can look at you and say, ‘Well, maybe you can have it all’ or look like you have it all,” Sanders complimented Biden.

Sanders closed her debut show with an address to viewers, acknowledging her work in politics serving as a spokeswoman for Biden and Harris as well as Sen. Bernie Sanders, but “now, I have something to say.”

“I know I have a responsibility. I promise to bring you an inside look at important political stories that impact you. And I’m not just talking about Washington but across our country where it’s all going on. We’re gonna get some insight for some heavy hitters and plus, we are gonna talk culture,” Sanders vowed.

Psaki, whose last day at the White House is Friday, will reportedly host a show on the Peacock streaming service and appear on MSNBC as a commentator once she joins the network, which is expected to happen in the coming months, if not weeks. She and Sanders have come aboard during a chaotic time for MSNBC, which has seen primetime star Rachel Maddow announce she’ll only host one day a week, former “11th Hour” host Brian Williams jump ship and ratings continue to languish in the Biden era.

New Group chairman NBCUniversal Cesar Conde, who oversees NBC News, CNBC and MSNBC, has been scrutinized in recent weeks when it became clear the network didn’t have any type of succession plan for Maddow, who now only hosts her show on Mondays despite earning $30 million per year.

The question of whether Psaki will bring star power to MSNBC remains to be answered, but the dismal launch for Sanders that included an interview with First Lady Jill Biden may create more headaches for Conde.

“Add the Symone Sanders show to the growing list of embarrassments for Cesar Conde,” a former high-level NBC News employee with knowledge of the company’s inner-workings told Fox News Digital.

“If she could only manage a handful of viewers for a debut featuring a marquee guest like the First Lady it’s only downhill from here,” the sourced added. “Psaki may want to reconsider her new career choice at the West Wing’s MSNBC branch before it’s too late.”

MSNBC won out on a reported bidding war with CNN and other outlets for Psaki, who has enjoyed favorable coverage to such a degree that one reporter anonymously said they feared challenging her too directly during briefings.

“Jen [Psaki] is very good at her job, which is unfortunate. And the work is a lot less rewarding, because you’re no longer saving democracy from Sean Spicer and his Men’s Warehouse suit. Jawing with Jen just makes you look like an a–hole,” they told Politico last month.

As the Washington Free Beacon noted, Sanders’ “flop TV show” may be an “ominous sign” for Psaki as she joins Sanders as a colleague.