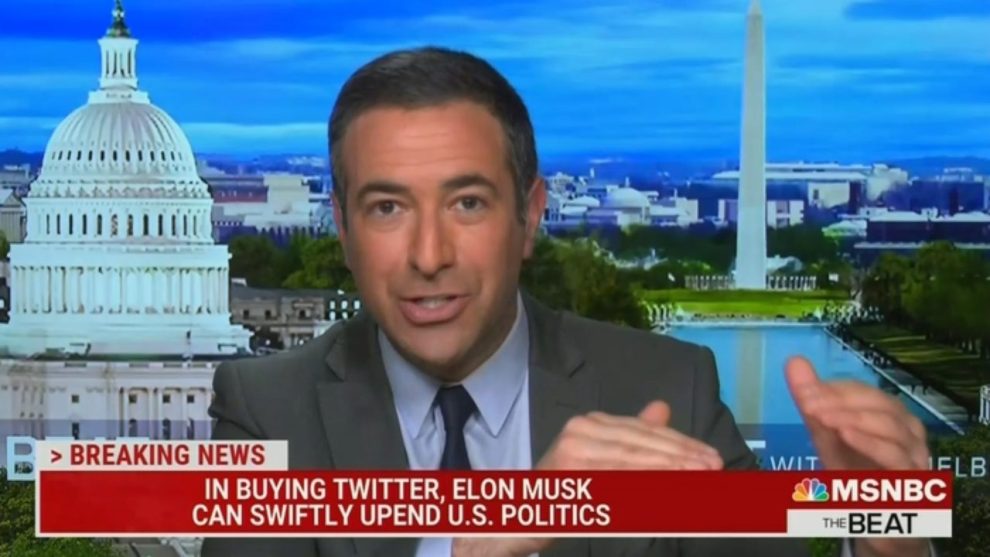 Ari Melber hosts a show called The Beat on MSNBC, and like many of his ideological comrades, he is Very Concerned™ about what might happen to Twitter with Elon Musk at the helm.

In what has to be the most stunning lack of self-awareness and cognitive dissonance perhaps ever committed the world wide web, Melber took to the air on Monday to express his fears about the demise of fair play on Twitter. Melber worried that one person owning all of a site like Twitter wouldn’t have to be transparent, and that person might even be able to *gasp* secretly ban politicians they don’t like, or outright ban them, or even *second gasp* “turn down their reach.” And no one would know until after the election!

“If you own all of Twitter or Facebook or what have you, you don’t have to explain yourself. You don’t even have to be transparent. You could secretly ban one party’s candidate or all of its candidates, all of its nominees. Or you could just secretly turn down the reach of their stuff, turn up the reach of something else. The rest of us might not even find out about it until after the election.”

Who wants to tell Melber first?

Melber seems not to have heard about the Trump ban or suspension of the New York Post for reporting the Hunter Biden laptop story, or the Project Veritas ban for the sin of committing actual journalism.

When conservatives were screaming about having their accounts targeted, shadow-banned and purged after the January 6 kerfuffle, liberal media personalities mocked and derided them, calling them hysterical nuts who were just overreacting to a typical bot purge.

If you don’t like it here, go build your own platform. We all remember that advice.

Now the shoe is on the other foot, except nothing is actually happening to the left. No one is getting purged. No one has been banned. Elon isn’t running through headquarters with a magic wand, zapping liberal accounts out of existence. He doesn’t even officially own Twitter yet. Still, the Ari Melbers of the world are terrified of the prospect that one bad CEO could use Twitter to silence the voices of his political and ideological opponents and censor politicians.

Many people have asked if this is parody, or some kind of deep fake. It is not. This man really said this, out loud, with his mouth. See for yourself.