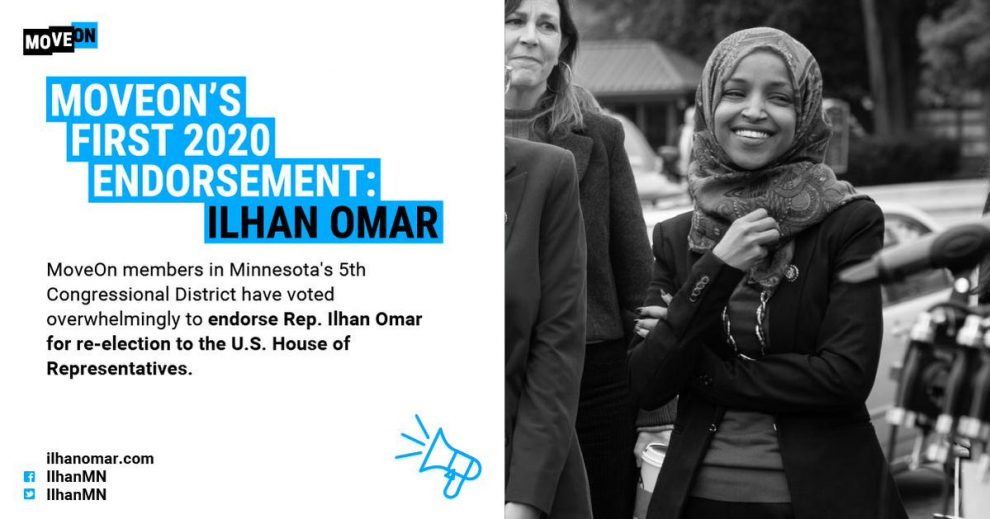 MoveOn’s Political Action in Michigan’s 13th congressional district is endorsing Rep. Rashida Tlaib (D-MI) for re-election in 2020 with 88 percent of its 7,000 members in favor of the move.

MoveOn, supported financially in part by leftist billionaire George Soros, sent the endorsement to the media via email, expressing why Tlaib should get a second two-year term in the House of Representatives.

Tlaib is one of the first two Muslim women elected to Congress in the 2018 midterm election. She and her colleague Rep. Ilhan Omar (D-MN) have made controversial remarks on numerous topics, including U.S. support for Israel and discrimination against Muslims.

Tlaib is also outspoken about backing the impeachment of President Donald Trump, including in a crude remark at a MoveOn event in January.

At a lively MoveOn.org event on Thursday night, Tlaib was speaking about what it meant to win her election earlier that year. She specifically recalled an anecdote about her son’s perception of her election outcome.

“People love you, and you win,” she told the room, according to the Detroit Free Press. “And when your son looks at you and says, ‘Mama, look you won, bullies don’t win.’ And I said, ‘Baby, they don’t,’ because we’re gonna go in there, and we’re gonna impeach the motherfucker.”

.@MoveOn mobilized their members and ran kickass GOTV efforts online in our district. @DFAaction called voters and activated volunteers across the district. @BoldProgressive helped raise grassroots donations across the country!

“In her short time in Congress, Rep. Tlaib has already become a leader on progressive issues such as Medicare for All, a Green New Deal, strengthening voting rights and more,” Rahna Epting, chief of program at MoveOn, said of the endorsement. “And she’s been fearless in pushing Congress to hold this President accountable for his criminal and corrupt acts.”

“The positive and bold progressive vision for our country that Congresswoman Rashida Tlaib fights for every day is one that should be embraced by candidates everywhere,” Epting said. “Her fearless advocacy of progressive policies is galvanizing the public in her district and throughout the country.”