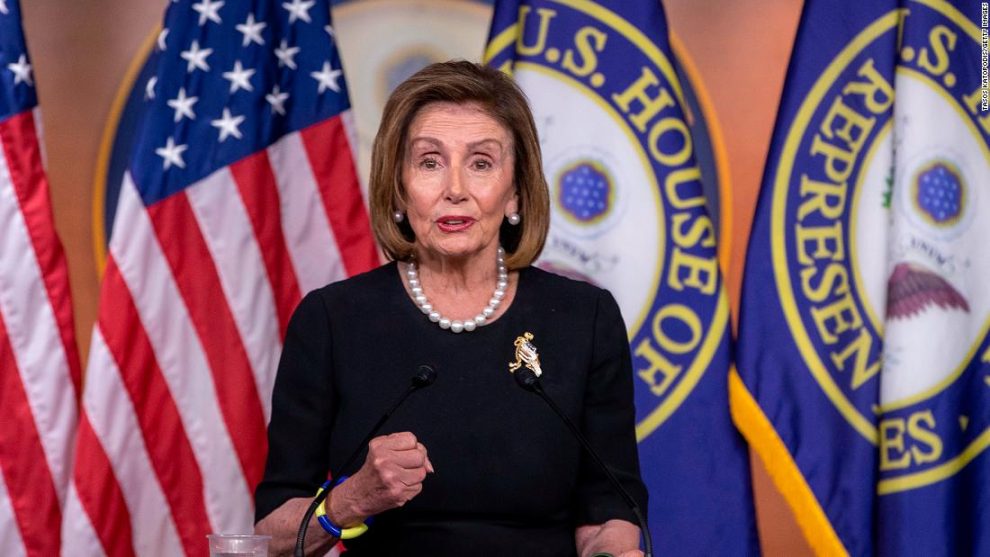 A little-noticed bill passed before Christmas shows that the U.S. Senate knows Nancy Pelosi had more to do with the U.S. Capitol breach on January 6, 2021, than anything President Trump did that day. Indeed, Nancy Pelosi could be crowned Queen of the Mob, since her actions led to the crashing of the perimeter fences, general dysfunction, and deaths of Trump supporters that day.

Even after the one-sided January 6 Committee left Pelosi’s role on the cutting room floor, there’s one inescapable conclusion: If she’d done her job, there would have been no riot, no deaths of Trump supporters, no show trials, and no political prisoners sitting in solitary confinement in a D.C. gulag for two years awaiting trial. And there would have been no need for federal agents to “orchestrate” a riot.

Pelosi was more responsible for the marauding mob at the Capitol that day than anything President Trump did to “incite” his huge crowd of supporters — which he provably did not.

And here’s how we know this.

On Monday night, December 12, senators unanimously passed a measure to remove authority for calling out the National Guard from politicians like Nancy Pelosi and gave it over to the Capitol Police.

Despite heightened threat assessments by federal authorities showing problems ahead of January 6, 2021, and the Trump Administration offering National Guard help, the people who were supposed call out the Guard, the speaker and D.C. Mayor Muriel Bowser, wanted no Guard on scene due to optics. Bowser had battled with Trump over National Guard presence during the BLM/Antifa riots in the past and didn’t want the militarized look in D.C. If she needed them at all for January 6, she decided the Guard would be unarmed and relegated to traffic control.

Pelosi’s office “was heavily involved in planning and decision-making before and during the events of Jan. 6, 2021, and micromanaged the Sergeant at Arms,” according to texts and other communications that came to light after January 6.

From early December 2020, Pelosi aides attended regular meetings with Irving and Sund to discuss the security plan. So hands-on was Pelosi’s chief of staff Terri McCullough that, at one point, she was editing details of parking, event timing and “language regarding official business visitors” for the Joint Session.

The Pelosi team’s messages and posts were exposed in an investigative report by the same House Republicans Pelosi removed from the J6 Committee. The messages show how Capitol Police Chief Steven Sund begged Pelosi and the Sergeant at Arms to plus-up security. His request for help was only satisfied after the riot fizzled out.

The New York Post reported that the GOP investigation showed that “House Sergeant at Arms Paul Irving, who answered to Pelosi as one of three voting members of the Capitol Police Board, ‘succumbed to political pressures from the Office of Speaker Pelosi and House Democrat leadership,’ was compromised by politics and did not adequately prepare for violence at the Capitol.”

The House and Senate sergeant at arms and Capitol Police Chief Sund resigned their jobs after the disaster, which could have been prevented.

But in a move the same week, the Democrat-run Senate tacitly affirmed that Nancy Pelosi royally screwed up by failing to take Trump up on his offer of using the Guard and preventing what the J6 Cassandras said was worse than the Civil War or the 9/11 attacks. How incredibly insulting.

Of course, after the unrest, neither woman was held accountable for failing to act. And the aftermath of the breach was more politicized than anything we’ve seen since the FBI and Hillary Clinton worked with actual Russian spies to create a fiction that Trump was a Russian secret agent.

Efforts to smear the outspoken Trump lived on in the outrageously one-sided January 6 Committee proceedings and continue to this day.

After kicking off Republicans from the January 6 Committee, unprecedented in the history of our country, Pelosi also struck a deal with her hand-selected gaslighters to not be a subject of the probe. Her fingerprints were to be wiped from the proceedings.

But if you know where to look you can see them.