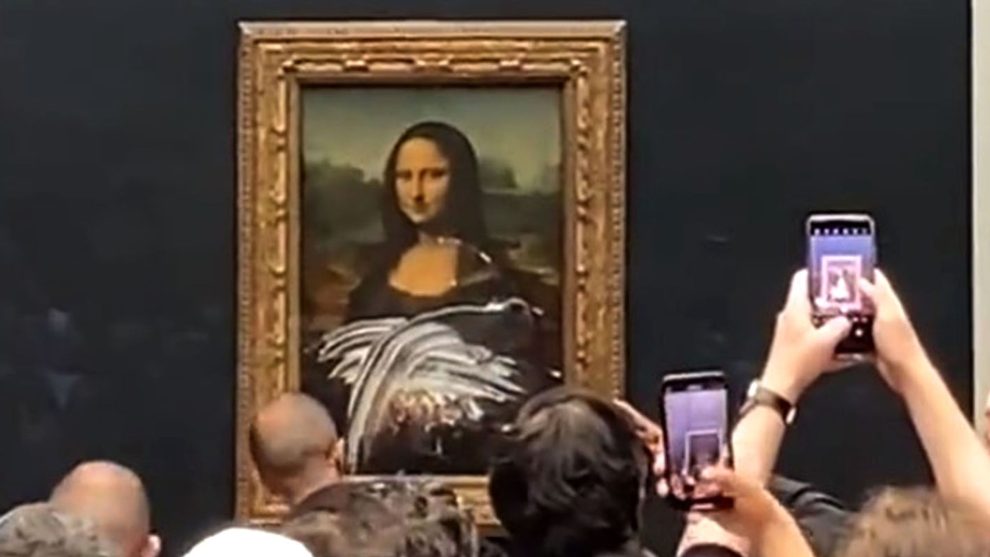 Footage captured at the Louvre in Paris shows a man apparently wearing lipstick and a wig asking people to “think of the planet” as he attacks the world’s most famous portrait.

A man seemingly disguised as an old woman in a wheelchair has staged an attack on the Mona Lisa.

Video shared online shows the world’s most famous artwork with what witnesses suggested was cake smeared across the glass case protecting it.

Bystanders said a man “dressed as an old lady” jumped out of a wheelchair at the Louvre in Paris before attempting to smash the protective glass in front of the Leonardo da Vinci painting.

One witness said the man then proceeded to “smear cake on the glass and throw roses everywhere before being tackled by security”.

Separate footage shows the man suspected of being responsible telling bystanders in French: “Think of the planet… there are people who are destroying the planet, think about that … That’s why I did it.”

The man, apparently wearing lipstick and a wig, is then escorted away by security. It was unclear what action, if any, the man now faces.

It is not thought that the painting, considered an archetypal masterpiece of the Italian Renaissance, was damaged.