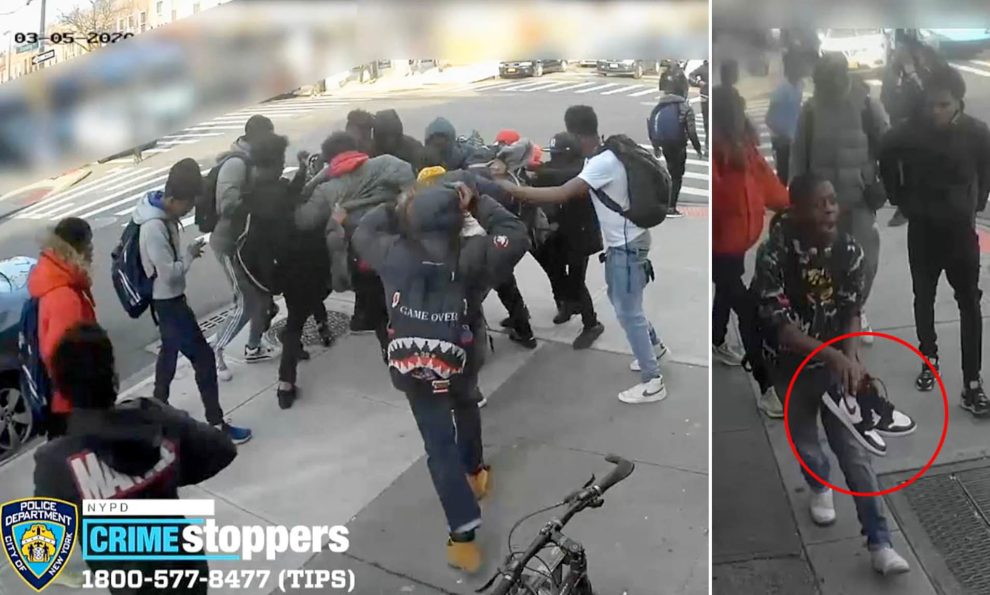 The video shows a group of “angry youths” assaulting a lone 14-year-old boy in Queens. One of the assailants attempts to stab the teenager but thankfully misses.

Unclear where and when this happened. But a gang of kids attacked a different kid. One of the kids pulls out a knife on the kid , unclear if the kid is stabbed.
I'll look for more info
( Repost) #crime #NYC #Friday pic.twitter.com/Bn2VTp6Px2

“A disturbing video posted on Twitter shows a 14-year-old student being beaten by a band of angry youths in Queens.

One of the attackers unsuccessfully tried to stab the helpless boy, cops said.

The beatdown took place Wednesday at about 3:30 p.m. in the vicinity of Thomson Avenue and 31st Street, police said.

The 14-year-old was assaulted by five “unknown males” who punched him multiple times in the head and body, the NYPD said.

One of the attackers flashed a knife and attempted to stab the victim, but miraculously, he was not cut, a department spokesperson said.

The youth armed with the shank was wearing a backpack with shark teeth.”

Despite the savage beating, the teen somehow escaped with only bruising and small cuts to his ears and arms. The NYPD has not made any arrests at this point.

This horrific assault and other recent violent crimes are a direct result of New York’s elimination of cash bail. NYPD data shows a tripling of re-arrests of burglary and theft suspects within 60 days after an initial charge from 2017. This is before the so-called “bail reform” was enacted.

Murders have also skyrocketed since cash bail was abolished. Killings on the famed NYC subway, for example, rose to the highest level in 25 years. This comes despite ridership falling overall. Overall, major crime has surged 36% this year compared to 2021.

NYC voters managed to make things even worse by electing communist Alvin Bragg as Manhattan District Attorney. Bragg has openly sided with violent criminals in the name of “criminal justice reform.” This year alone, he has reduced 52% of all felonies to misdemeanors.

Unfortunately, the Democrats will not change course until rising crime poses a threat to their power. New York voters blew a golden opportunity to send them packing last month.