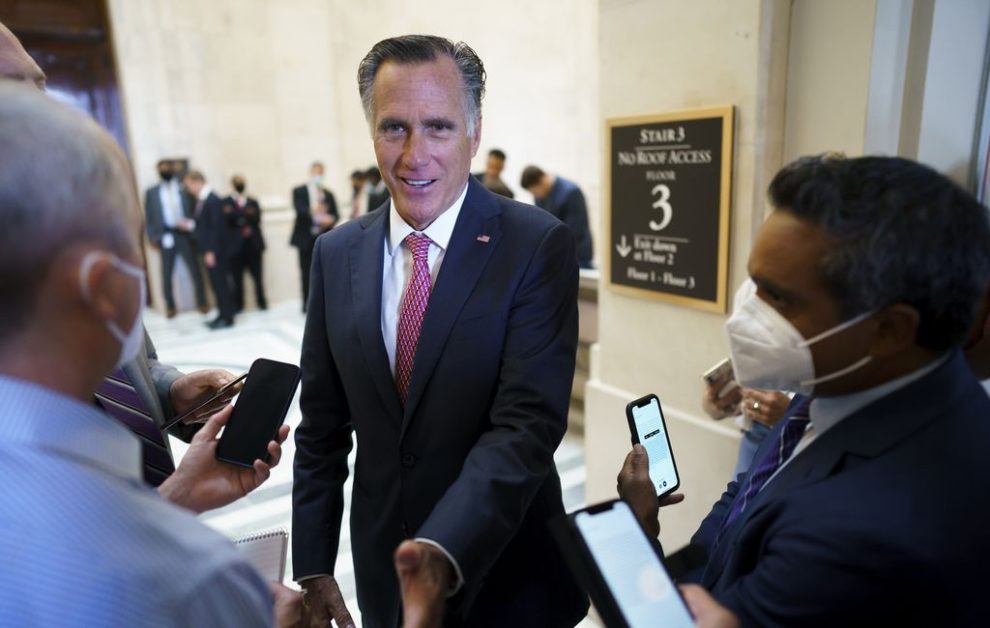 Given the utter havoc that President Puppet and the Democrats are presently wreaking upon the United States of America, one would think that Republican unity would be easy to come by these days.

One would be wrong.

The reason for that is simple: Republicans aren’t a hive mind like the Democrats. There are always members of the GOP in Congress who are willing to swim upstream in their own party just to get a pat on the head from The New York Times. Yes, the Democrats have had their struggles recently with Joe Manchin, Kyrsten Sinema, and AOC but they’re anomalies. There is always a Manchin, Sinema, or AOC hanging around the GOP.

At present, Mitt Romney and Liz Cheney are headlining the Republican turncoat show, with Susan Collins playing the screw-you-every-other-vote supporting role she’s been in for 25 years.

I didn’t mention Adam Kinzinger because he’s a Republican from Illinois, which doesn’t count.

Under normal circumstances, a couple of Republicans who couldn’t be trusted would be factored into the political equation. We live in an era rife with extraordinary circumstances, however, and the likes of Romney and Cheney cannot and should not be tolerated. Dissent is one thing, spiteful revenge politics in a time of crisis are another.

We already know that Cheney is persona non grata among Wyoming Republicans. Could the same fate be awaiting Romney in Utah?

For some time now, I’ve longed for the opportunity to donate money to a viable Republican challenger to Sen. Mitt Romney (R-Utah). Between his votes to impeach Trump last year and his vote in favor of Ketanji Brown Jackson’s confirmation to the Supreme Court, there’s pretty much nothing Romney could do to redeem himself in my eyes.

Romney seems to be aware of the fact that he’s ruined his political career with his votes and is now saying that he isn’t sure if he will seek reelection in 2024.

“I’m going to cross that bridge down the road,” Romney told The Hill. “I haven’t given a lot of attention yet.”

It may not be a firm “no,” but being a United States Senator is a pretty cushy gig and it’s rare to find one hemming and hawing about running for reelection halfway through his first term.

If an incumbent senator is going to be ousted, the odds to make it happen are far greater after just one term than at any other time. Those six-year terms give them too much time to pass out goodies. Get through the first term and the next thing you know, you’re Dianne Feinstein.

It’s possible that Romney may have gotten himself in trouble much the same way Jeff Flake, who is now one of Joe Biden’s ambassadors, did here in my home state of Arizona. Here’s a refresher from something I wrote last year:

Flake has been a darling of the Democrats ever since he threw in with the sad-sack Never Trump crowd a few years back. He did that after having failed his Republican constituents in Arizona so utterly that he had to end his bid for a second Senate term more than a year before the election.

It’s obvious that Romney revels in his own “darling of the Democrats” status.

Flake tried to make it all about Trump but he was toast here long before then. I hadn’t moved back here yet but my conservative friends were disappointed in him almost from the moment he transitioned from the House to the Senate.

One big difference between Arizona then and Utah now is that the likelihood of Romney getting replaced by another Republican is greater.

“Either one of them would be a formidable opponent for Romney within the Republican Party because he has made himself persona non grata with many of the conservative Republicans,” said Richard Davis, a professor emeritus of political science at Brigham Young University. “He’s actually more popular with Democrats and independents than he is with Republicans right now. So getting past the Republican primary would be a tough one.”

The Democrats have laid bare their plans to ruin the version of this country that we love. Republicans like Romney are a cancer that are not only bad for the party but, at this point in history, bad for the country as well.

Since 2012, I’ve said that my vote for Mitt Romney is the only vote I wish that I could have back. With any luck, there are a lot of Republicans in Utah feeling the same way right now.