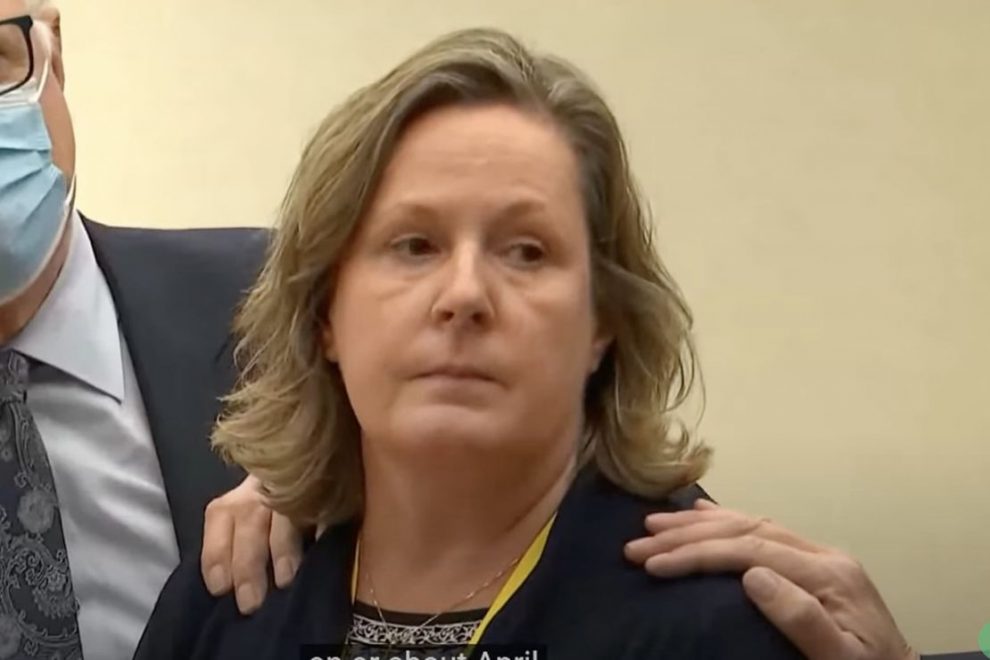 If former Brooklyn Center, Minn., police officer Kim Potter had drawn and used her service pistol without mentioning deploying her taser and still shot and killed Daunte Wright she might be a free woman today. Instead, she came to the aid of her fellow officer, who was trying to cuff the 20-year-old felon when the suspect dove inside his car, resisting arrest. The other officer was still trying to get Wright out, when she announced she’d use her “Taser! Taser! Taser!” to stop him from fleeing but pulled out her gun by accident.

Now she’s going to prison for being found guilty of two counts of manslaughter.

The officer attempting to subdue Wright was black, but it has been only Potter’s color — white — that has mattered in the coverage and narrative told about this horrible case. Wright was black.

Daunte Wright’s death on April 11, 2021, sparked riots in the Minneapolis area, following as it did the death of George Floyd, which also sparked riots.

Naturally, as woke Minneapolis figured out during the trial of former police officer Derek Chauvin for Floyd’s death, job description and skin color have more to do with a jury’s decision than the actual facts of the case.

Attorney Nick Rekieta, who watched the trial on his Rekieta Media live stream on YouTube, said after the verdict that “justice was not done.”

Here’s a sample of their excellent coverage:

Indeed, he lectured, “if I were a cop in Minnesota I would never carry a TASER again. I would never attend TASER training, I would never sign a form stating I am certified in TASER use. The prosecution utilized all of these things to convict someone who would have been justified to draw a gun instead.”

The prosecution utilized all of these things to convict someone who would have been justified to draw a gun instead https://t.co/h9tT9wbXSE

The Minneapolis area jury found the 26-year veteran of two counts of manslaughter after an 18-day-long trial, and she now sits in a jail cell, left to figure out how she will go about appealing this conviction.

New York litigator Joe Nierman, known as “Good Lawgic” on YouTube, said of the apparent jury nullification that it could only have come from a jury that “walked in dead-set on guilty.”

The Law of Self Defense’s Andrew Branca, who has followed every moment of the trial, said that “every cop is sending out their resume right now.”

Nate Broady, known as “Nate the Lawyer” on YouTube, said the jury got it wrong and laid out the case for acquittal.

Why Kim Potter is NOT GUILTY but the Jury Disagrees.| Lawyer Explains https://t.co/eslvGm2Cbx via @YouTube

The jury, which consisted of nine white people, two people of Asian descent, and one black person, found her guilty of the lesser manslaughter charge on Tuesday, and the more serious charge Thursday, according to the jury verdict forms seen by NBC News.

Wright was pulled over for expired tags, something having to do with his air freshener hanging from a rearview mirror, and a warrant for his arrest. When they pulled him over, they found he had no driver’s license, no insurance, a warrant for an illegal weapons charge, and “an order of protection” against him. He was also suspected in the shooting in the head of his 16-year-old former friend, which left the friend permanently brain-damaged.

As he was being cuffed by the arresting officer, Wright broke free, dove into the front seat of his car, and attempted to drive away. That’s when Potter deployed what she thought was her taser. Instead, it was her Glock semi-automatic pistol.

Leftist Attorney General, Keith Ellison declared that with the verdict, “we have a degree of accountability for Daunte’s death, ” something which Kim Potter always declared from the second the shot rang out.

Potter worried that she’d be sent to prison for the shooting, and now she is.

After the verdict and before she was taken away in handcuffs, Potter’s husband, a retired cop said loudly, “I love you, Kim.” She said the same back at her husband.

Robert Barnes reacted to the judge calling the jurors “heroes” in the courtroom after the verdict was read on Thursday. “You’re villains. You didn’t do your jobs,” he fumed. And he lambasted the Ellison-influenced prosecutorial milieu in which Twin Cities residents find themselves, saying, “this case is absolute proof there’s zero chance of getting an impartial jury. This is like Martin Luther King being tried in Birmingham. Attorneys had better be moving to transfer their cases out of this jurisdiction.”

She could receive 15 years in prison when she’s sentenced in February.