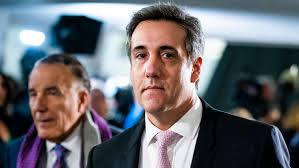 Michael Cohen, the ex-Trump fixer who has been sentenced to three years in prison, arrived on Capitol Hill Tuesday for the first of three congressional hearings this week where he is expected to testify against his former boss.

As he entered the hearing room Tuesday, Cohen did not answer questions from reporters about why he should be trusted. As part of a deal with prosecutors, Cohen pleaded guilty to previously lying to Congress about Trump’s past business dealings in Russia, among other crimes.

The White House, in a statement Tuesday, sought to portray Cohen as a liar.

“Disgraced felon Michael Cohen is going to prison for lying to Congress and making other false statements,” White House press secretary Sarah Sanders said. “Sadly, he will go before Congress this week and we can expect more of the same. It’s laughable that anyone would take a convicted liar like Cohen at his word, and pathetic to see him given yet another opportunity to spread his lies.”

See also  7 in 10 American Voters Do Not Want Joe Biden to Run for Reelection
→ What are your thoughts? ←
Scroll down to leave a comment: