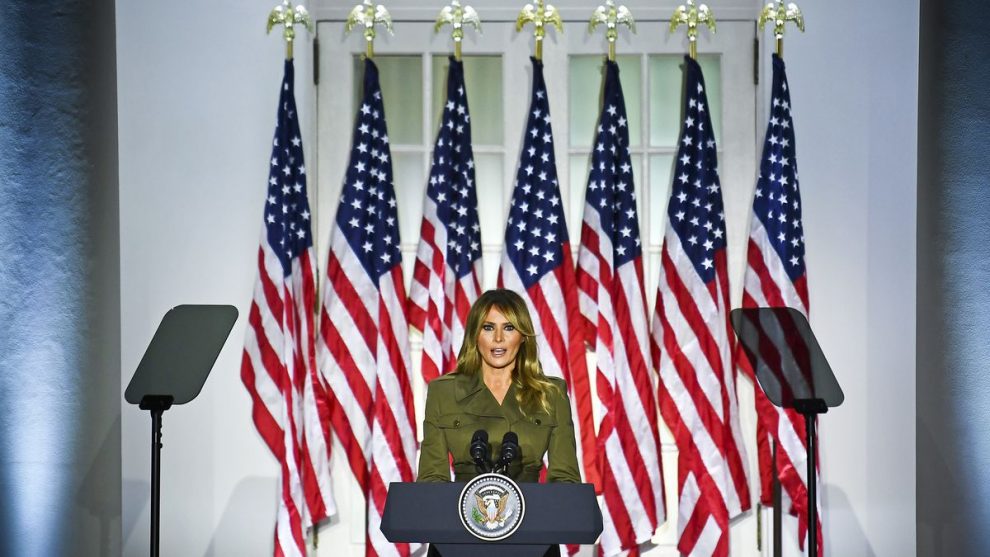 First lady Melania Trump delivered a keynote address to the Republican National Convention on Tuesday, describing her husband as a champion for families and imploring Americans to cast ballots for his reelection.

In a rare public speech from the White House Rose Garden, the first lady offered condolences to those who have lost loved ones due to the novel coronavirus, expressed gratitude to first responders and sought to present a unifying message to the country gripped by the pandemic that has killed close to 180,000 Americans.

“I know many people are anxious and some feel helpless. I want you to know you are not alone,” Melania Trump said. “It has been inspiring to see what the people of our great nation will do for one another, especially when we are at our most fragile.”

The first lady avoided attacks on Democratic nominee Joe Biden that have been leveled in other speeches from guests at the GOP convention, and instead reflected on her experiences as first lady and her anti-bullying campaign, the “Be Best” initiative, and characterized Trump as someone who has empowered women and worked on behalf of American families.

“I don’t want to use this precious time attacking the other side because as we saw last week, that kind of talk only serves to divide the country further,” the first lady said, offering tacit criticism of the Democratic convention, which featured sharp rebukes of the president’s handling of the coronavirus. “I’m here because we need my husband to be our president and commander in chief for four more years. He is what is best for our country.

She defended Trump’s style, noting that he “makes no secrets about how he feels about things” and describing him as “an authentic person who loves this country and its people and wants to make it better.”

She called a vote to reelect Trump not a “partisan vote” but a “common sense vote.”

The first lady delivered her address Tuesday evening to an audience in the White House Rose Garden that included Trump, Vice President Pence and second lady Karen Pence. As she concluded her address, Trump stood, kissed her on the cheek, and they walked back hand-in-hand to the White House.

The speech represented a notable foray into the public spotlight for Melania Trump, who has largely maintained a low profile as first lady during Trump’s first term and rarely delivers publicly speeches.

She has somewhat increased her public appearances recently, though, participating in an awareness campaign urging Americans to wear face masks and delivering a message to students in May recognizing their sacrifices to stop the spread of the coronavirus.

A day before her speech Tuesday, the first lady spoke at event outside the White House marking the opening of an exhibit that recognizes the 100th anniversary of the ratification of the 19th Amendment, which gave women the right to vote. Last week, she stood alongside Trump as he announced a posthumous pardon of famed women’s rights advocate Susan B. Anthony.

Her address comes as Trump looks to shore up support among female voters. Recently polls suggest a majority of white, suburban women approve of the president’s job performance, presenting a hurdle for Trump as he mounts his push for reelection against Biden, who leads the incumbent president in national and battleground state polls. Trump narrowly won a majority of white female voters in 2016.

Trump has hurled insults at women throughout his time in office. In the heat of the 2016 campaign Trump was infamously heard in leaked audio from 2005 boasting to an “Access Hollywood” host about grabbing women by the genitals. He has recently sought to appeal to suburban female voters by addressing them as “housewives” and highlighting his efforts to repeal an Obama-era fair housing rule meant to limit housing discrimination.

Also during the convention program on Tuesday, Republicans aired a video highlighting how Trump has placed women in significant positions on his campaign and in his administration.

“This president has been a champion for women mostly because he speaks to them like they can handle and tackle all issues,” outgoing White House counselor Kellyanne Conway said in the video.

The first lady’s speech capped off an evening of speeches including the president’s children Eric and Tiffany Trump, as well as Secretary of State Mike Pompeo. Trump himself also featured prominently in Tuesday’s program, as Republicans played videos of the president granting a pardon to a convicted felon and participating in a naturalization ceremony at the White House.

The Rose Garden was recently renovated under Melania Trump’s direction and she unveiled the design over the weekend just in time for the convention. Trump will deliver his acceptance speech from the South Lawn of the White House on Thursday evening. Trump has faced criticism for his use of the White House as a backdrop for the partisan political events, breaking with past precedent from Democratic and Republican presidents.

Melania Trump’s speech on Tuesday served as a redo of sorts. She stirred controversy with her 2016 convention speech because a portion of her remarks bared striking resemblance to former first lady Michelle Obama’s speech at the Democratic National Convention in 2008, opening her up to accusations of plagiarism. A Trump Organization employee eventually acknowledged that phrases of Michelle Obama’s speech made it into the final draft but described the incident as accidental.

In a television appearance on MSNBC earlier Tuesday, first lady spokesperson Stephanie Grisham said that “every word” of Melania Trump’s address would be her own. The first lady’s office had been working on the speech for the past three weeks, Grisham said.