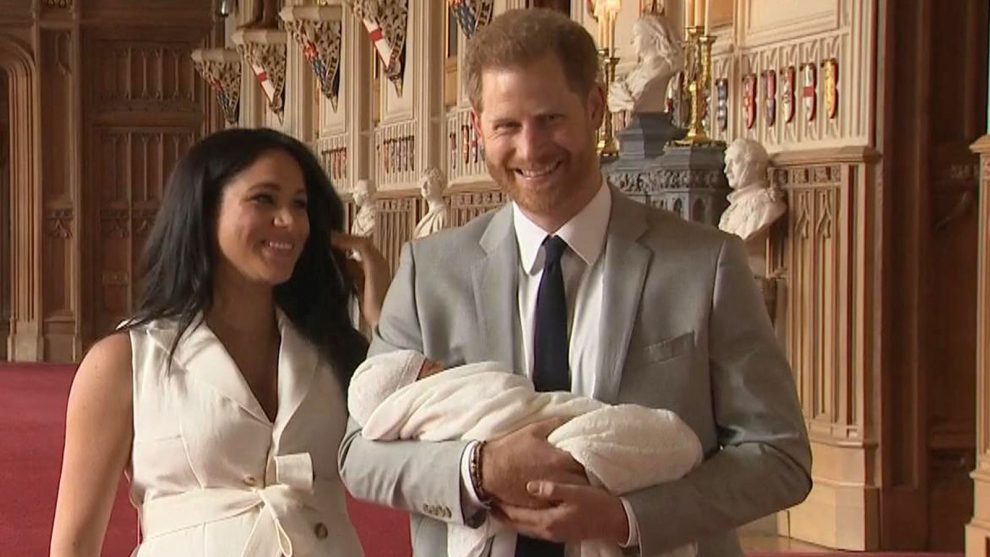 The newest member of Britain’s royal family arrived Monday, but proud parents Prince Harry and Meghan, Duchess of Sussex, waited until today to give an eager public its first look at their son.

The family of three gathered at Windsor Castle, near their new home, and posed for the baby’s first press pics — and they’re absolutely precious.

“It’s magic. It’s pretty amazing,” the duchess said as her husband cradled their baby son. “I have the two best guys in the world so I’m really happy.”

Neither the duke nor duchess revealed the baby’s name but said their son already has shown “the sweetest temperament.”

“He’s really calm,” she said, prompting Prince Harry to joke: “I wonder who he gets that from.”

Meghan said she couldn’t ask for a better baby.

“He’s just been a dream, so it’s been a special couple of days,” she said.

Asked who the baby takes after, Harry noted it’s too early to tell.

“Everyone says babies change so much over two weeks,” he told reporters gathered at Windsor Castle. “We’re basically monitoring how the changing process happens over this next month really, but his looks are changing every single day, so who knows?”

Still appearing giddy over the birth, Harry admitted he’s still getting used to his new role as a father.

“We’re still trying to figure it out,” he said, but adding: “Parenting is amazing. It’s only been — what, two and half days, three days. We’re just so thrilled to have our own little bundle of joy.”

The shots of the first-time mom and dad beaming alongside their baby boy are a welcome treat, and one that their many global fans have waited for — a little longer than usual.

As the Duke and Duchess of Sussex revealed before their son’s birth, they decided to forgo the typical press photo op held outside a hospital shortly after a royal wee one is welcomed to the world.

Members of the royal family have long opted to give the media a quick look at their babies before leaving the hospital — sometimes just hours after birth.

That was the case following all three of deliveries for Catherine, Duchess of Cambridge. Each time, she and Prince William posed with their children — Prince George, 5, Princess Charlotte, 3, and Prince Louis,1 — outside of the Lindo Wing of St. Mary’s Hospital.

Even Prince Harry’s own parents, Prince Charles and Princess Diana, participated in the practice. But in a break with that longstanding royal tradition, the Sussexes chose personal privacy over protocol.

“Their Royal Highnesses have taken a personal decision to keep the plans around the arrival of their baby private,” read a statement released by Buckingham Palace prior to the recent birth. “The Duke and Duchess look forward to sharing the exciting news with everyone once they have had an opportunity to celebrate privately as a new family.”

Hours after their son’s birth in the early hours of Monday morning, Prince Harry surprised reporters gathered on the grounds of Windsor Castle and shared his joy.

“It was amazing — absolutely incredible,” he said. “I’m incredibly proud of my wife. As every father and parent would ever say, your baby is absolutely amazing, but this little thing is absolutely to die for, so I’m just over the moon.”

He added an assurance that the entire Sussex family would see reporters “in probably two days’ time.”

Now, having given themselves those all-important personal days, they’ve given the rest of us a glimpse at their growing family.

And we can’t wait to see more!