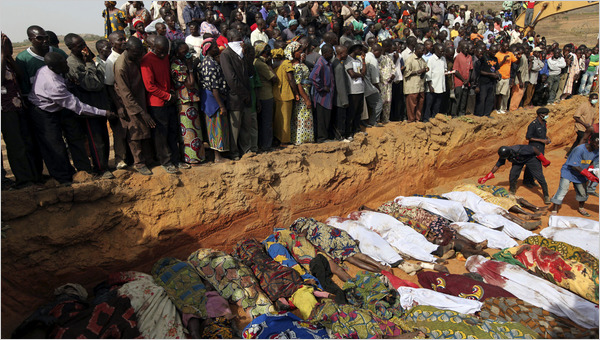 Political leaders and public figures were falling over themselves this weekend to condemn the mosque attacks in New Zealand, while dozens of Christians were slaughtered by Muslims in Nigeria to the sound of crickets.

The mosque attacks were indeed a horrific affair and worthy of universal condemnation. Presidents, prime ministers, royalty, and religious leaders rushed to extend their condolences to victims and their families — as well they should — while decrying the hate that purportedly motivated the shootings.

Without exception, the mainstream media gave top billing to the shootings, with newspapers carrying the story on their front pages and television news channels leading off their broadcasts with the story.

The bizarre aspect of the coverage was not, in fact, the attention paid to a heinous crime committed in New Zealand, but the absolute silence surrounding the simultaneous massacre of scores of Christians by Muslim militants in Africa.

As Breitbart News alone reported among major news outlets, Fulani jihadists racked up a death toll of over 120 Christians over the past three weeks in central Nigeria, employing machetes and gunfire to slaughter men, women, and children, burning down over 140 houses, destroying property, and spreading terror.

The New York Times did not place this story on the front page; in fact, they did not cover it at all. Apparently, when assessing “all the news that’s fit to print,” the massacre of African Christians did not measure up. The same can be said for the Washington Post, the Chicago Tribune, the Detroit Free Press, the LA Times, and every other major paper in the United States.

The news shows from the three major television channels did not mention the story, and nor did CNN or MSNBC.

There are several possible explanations for this remarkable silence, and none of them is good.

Since, in point of fact, Muslim radicals kill Christians around the world with alarming frequency, it is probable that one more slaughter did not seem particularly newsworthy to the decision-makers at major news outlets. Muslims being killed, on the other hand, may strike many as newsworthy precisely because it is so rare.

A second motive for the media silence around the massacre of Christians in Nigeria may be geo-political and racial. New Zealand is a first-world country where such things are not supposed to happen, whereas many people still consider Africa to be a backwards place where brutal killings are par for the course.