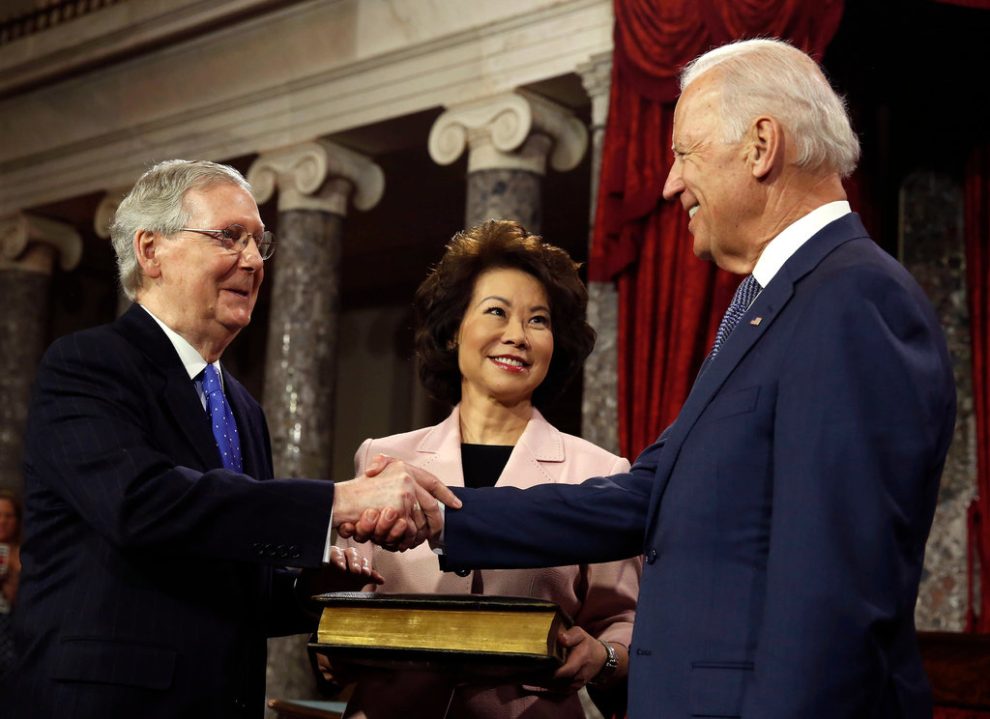 Republican Senate Minority Leader Mitch McConnell of Kentucky is starting the new year making very clear whose side he is on–and it is not Republican voters. After betraying the incoming GOP House majority by negotiating a $1.7 trillion omnibus funding bill in the lame duck Congress last month to deny House Republicans the chance to control federal spending this year, McConnell is set to host Joe Biden in Kentucky on Wednesday at a “bipartisan” celebration of Biden’s $1.2 trillion infrastructure bill passed in 2021 with help from McConnell.

NBC News was first to report on the McConnell-Biden event which will highlight a $1.6 billion bridge replacement project, funded by the infrastructure bill, to replace the Brent Spence Bridge connecting Ohio and Kentucky. Ohio Gov. Mike DeWine (R) and Kentucky Gov. Andy Beshear (D) are also expected to attend the event.

President Joe Biden will open the new year with a bipartisan show of support to tout one of his major legislative wins, appearing with Senate Minority Leader Mitch McConnell in Kentucky to announce a major project funded by the infrastructure law.

The appearance with McConnell, R-Ky., and other regional leaders from both parties Wednesday signals a dual focus for a White House aiming to stay above the political fray in 2023. The stop, and others like it this week featuring other administration officials across the country, will come a day after the new Republican-led House of Representatives takes power in Washington, kicking off a period of divided government as the 2024 presidential election campaign also begins to take shape.

…Vice President Kamala Harris will hold an event in Chicago on Wednesday as Transportation Secretary Pete Buttigieg does the same in Connecticut. On Thursday, White House infrastructure coordinator Mitch Landrieu will visit San Francisco, one week after outgoing House Speaker Nancy Pelosi announced that the city’s iconic Golden Gate Bridge will undergo a $400 million retrofit funded by the law.

In November 2021, McConnell defended his support of Biden’s infrastructure bill in response to criticism by President Trump (excerpt via Business Insider):

Senate Minority Leader Mitch McConnell is doubling down on his support for the infrastructure bill despite criticism from former President Donald Trump.

Speaking to The Washington Post on November 16, McConnell reiterated his support for the $1.2 trillion bipartisan infrastructure bill, saying he was “proud” of his vote.

“I watched each of the two previous administrations struggle with the issue of how to meet the infrastructure needs of the country,” McConnell said. “I joined 18 other Senate Republicans feeling like now is the time to address it.”

McConnell added that from a “Kentucky point of view,” the infrastructure bill was “extremely good” for the state. This echoed a statement he made last week, where he called the bill “a godsend for Kentucky.”

“I’m proud of my vote, and members are obviously free to choose how they wanted to vote. And in the Senate, 19 Senate Republicans felt it was the right thing to do for the country,” McConnell said.

Last month McConnell bragged he was “proud” to work with a “Democratic President, a Democratic House and a Democratic Senate” to pass the $1.7 trillion omnibus bill, touting the funding for Ukraine as the number one priority.

.@LeaderMcConnell (R-KY) on omnibus: "I'm pretty proud of the fact that with a Democratic president, a Democratic House and a Democratic Senate, we were able to achieve, through this omnibus spending bill, essentially all of our priorities." pic.twitter.com/D3UvbAZ32J