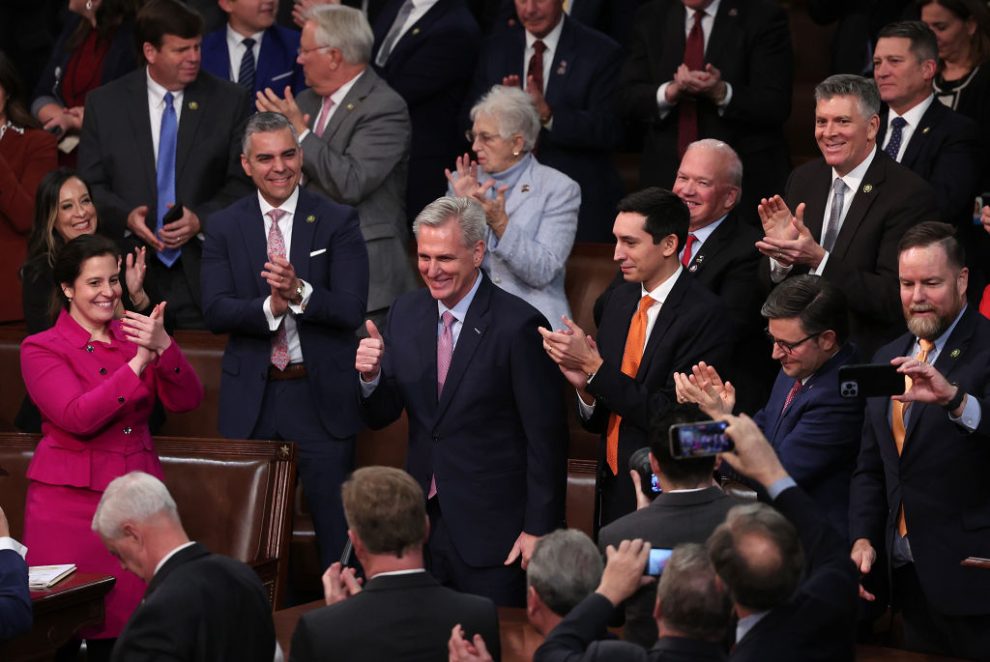 Rep. Kevin McCarthy (R-CA) was elected House speaker after midnight Saturday on the 15th round of voting, marking the conclusion of an intense week of negotiations with Republican defectors and a dramatic Friday night packed with tension and a physical altercation.

No speaker race had lasted 15 rounds or more in 163 years, according to House records. The last race to take more than one ballot occurred in 1923, when reelecting then-Speaker Frederick Gillett took nine ballots.

The roughly 20 members who had been voting against McCarthy throughout the week — many of whom are in the House Freedom Caucus — sought various structural changes to the House and other commitments from the leader, aiming to shift power away from leadership and to rank-and-file members and Freedom Caucus members specifically.

Their asks included, among many items, bringing the motion to vacate down to a one-member threshold and putting more members of the Freedom Caucus on the Rules Committee, as well as budgetary provisions and vows to bring votes on certain legislation to the floor.

Rep.-elect Anna Paulina Luna (R-FL) laid out a list Friday of some of the items holdouts had been looking for:

In a sign that members were nearing an agreement, more than half of the holdouts changed their vote to McCarthy Friday morning, leaving the pressure on six members who could derail McCarthy’s speakership should they continue to refuse to vote for him.

Those members had mixed votes in the 14th round, and the vote ultimately came down to Gaetz voting “present,” causing McCarthy to come in one vote shy of victory.

Gaetz’s vote was devastating for the conference overall — despite McCarthy making progress that round — as many members had previously conveyed high expectations that McCarthy would attain the gavel on the much anticipated ballot. One member, Rep.-elect Wesley Hunt (R-TX), had gone as far as to fly to Texas and back to D.C. on Friday in the midst of he and his wife caring for a newborn baby, who was born premature.

In a stunning turn of events after Gaetz cast his vote, Rep. Mike Rogers (R-AL) appeared to yell at Gaetz and lunge toward him, and he was physically pulled back by another member before Rogers stormed out of the chamber.

Before the blockbuster evening, talks had been ongoing for three grueling days as holdouts and key allies of McCarthy, such as Reps. Patrick McHenry (R-NC), Tom Emmer (R-MN), and Jim Jordan (R-OH), met behind closed doors to work out issues.

Those standing firm in their vote in favor of McCarthy had become increasingly frustrated with those defecting, pointing to the fact that no House business could occur, including establishing rules, passing legislation, and holding hearings, until a speaker was elected.

Rep. Michael Gallagher (R-WI) and other veterans raised the issue Wednesday that even national security was on hold while the speaker position was vacant.

Gallagher, a retired Marine Corps intelligence officer, said he planned to meet with the chairman of the joint chiefs in a sensitive compartmented information facility (SCIF) on Wednesday, but, Gallagher said, “I’m informed by House security that technically I don’t have a clearance.”

Rep. Dan Bishop (R-NC) told Breitbart News on Thursday after casting his ninth vote against McCarthy that despite pressure on holdouts such as himself to provide an answer on who they would vote for if not McCarthy, Bishop took a calm tone as he said a “resolution” was in the works.

“A lot of people have tried to put members on the defensive … and have said, ‘Well, where does this end?’ There’s no reason for anxiety about where it ends,” Bishop said. “It ends when people assemble, finish discussing and working together and working over hard issues and hard questions to come to a resolution by the requisite majority that the people have elected. It’s a great thing.”

McHenry, noting he had worked with McCarthy during the entirety of McCarthy’s 16-year tenure, stood up to nominate the leader for speaker in the 14th round, praising him as “relentless,” adding, “The man does not quit.”

On the 15th and final ballot, Rep. Bruce Westerman (R-AR) stood up to nominate McCarthy, announcing to applause that he was nominating the leader in pursuit of “a little less talk and more action.”

With McCarthy’s election, the House is expected to adjourn in the early hours of Saturday morning and then vote on a rules package as its next order of business.