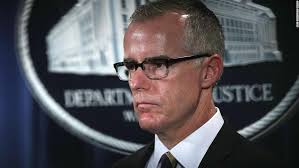 Former FBI Deputy Director Andrew McCabe says that after President Trump fired his boss, FBI Director James Comey, there were discussions within the Department of Justice about invoking the 25th Amendment to remove Trump from office.

“There were meetings at the Justice Department at which it was discussed whether the vice president and a majority of the Cabinet could be brought together to remove the president of the United States under the 25th Amendment.”

In a statement released by the Justice Department, Rosenstein said McCabe’s account of a discussion of invoking the 25th amendment was “inaccurate and factually incorrect.”

Trump responded in a pair of tweets later Thursday morning.

Disgraced FBI Acting Director Andrew McCabe pretends to be a “poor little Angel” when in fact he was a big part of the Crooked Hillary Scandal & the Russia Hoax – a puppet for Leakin’ James Comey. I.G. report on McCabe was devastating. Part of “insurance policy” in case I won….

….Many of the top FBI brass were fired, forced to leave, or left. McCabe’s wife received BIG DOLLARS from Clinton people for her campaign – he gave Hillary a pass. McCabe is a disgrace to the FBI and a disgrace to our Country. MAKE AMERICA GREAT AGAIN!

The discussions occurred between the time of Comey’s firing in May of 2017 and the appointment eight days later of special counsel Robert Mueller to oversee the FBI’s investigation into Russian interference in the 2016 election.

According to the Times, Rosenstein also suggested that he secretly record Trump in the White House. Rosenstein disputed the account, and a Justice Department official said he made the remark sarcastically. But McCabe told Pelley that Rosenstein’s offer to wear a wire was made more than once and that he ultimately took it to the lawyers at the FBI to discuss.

McCabe, who was named acting director of the bureau after Comey’s firing, launched obstruction of justice and counterintelligence investigations into whether Trump obstructed justice by firing Comey.

He told Pelley he did so in order to preserve the FBI’s Russian probe in case there was an effort by Trump to terminate it.