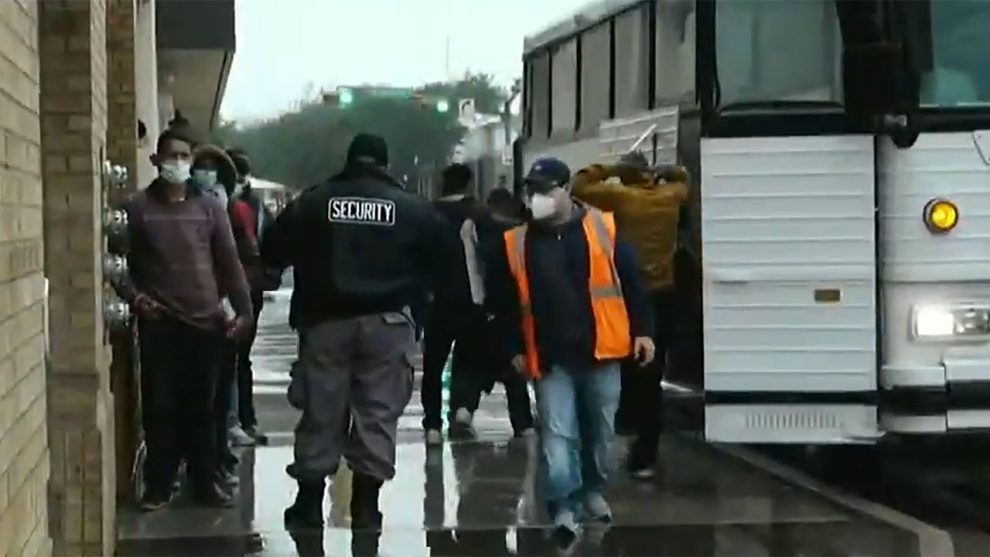 Large numbers of single adult illegal immigrants are being released and transported into the U.S. in Texas via a small, unmarked office in a parking lot, video caught by Fox News on Sunday shows.

Fox witnessed men go into a small, unmarked office, then re-emerge moments later as multiple taxi cabs then showed up to collect the migrants — who were then shuttled off to nearby Harlingen Airport. There were no children or migrant families among the groups.

Several of the migrants told Fox that they had crossed illegally that morning, paying approximately $2,000 per person to cartel smugglers. They also said they were flying to destinations including Miami, Houston and Atlanta.

Single adults are typically being expelled via Trump-era Title 42 public health protections. The Biden administration kept Title 42 in place but is not applying it to unaccompanied children or most migrant families. However, single adults have long been the easiest category of migrant to deport.

In a statement to Fox News, the city of Brownsville said its Office of Emergency Management, through federal assistance from the Federal Emergency Management Agency (FEMA), works to facilitate “the transfer of these migrants to their final destination by allowing them to use services to contact their families, NGOs, or a taxicab.”

It confirmed that the parking garage serves as a staging area for migrants to be given travel information to “facilitate their transfer to their final destinations.” Migrants can also be given a health screening there, a spokesperson said.

Customs and Border Protection (CBP) said its agency was not involved in the release. An Immigration and Customs Enforcement (ICE) source who viewed the footage said they believed it was an ICE release.

The development comes just as CBP officially released its December border numbers — showing 178,840 encounters in December, a slight increase over November, but significantly higher than the 73,994 encountered in December 2020.

The Biden administration has been struggling with the crisis at the border and is re-establishing the Trump-era Migrant Protection Protocols (MPP) in response to a court order that found its dismantling of the program unlawful.

Last week, the program — which sees migrants returned to Mexico — was expanded to the Rio Grande Valley sector. The returns are set to take place through the Brownsville port of entry.