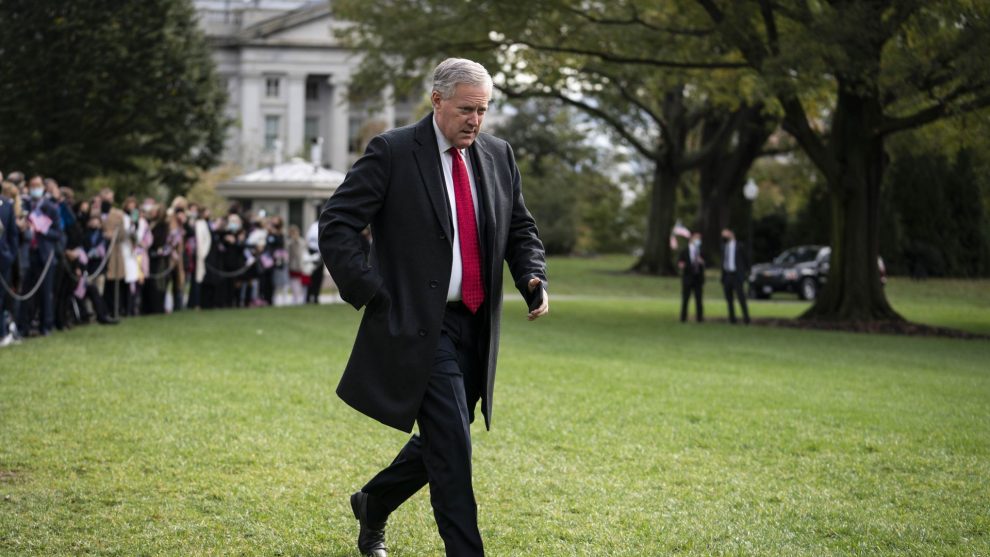 White House chief of staff Mark Meadows has tested positive for the coronavirus, an official familiar with the matter confirmed late Friday.

The chief of staff is the latest high-ranking White House official to test positive for the highly-contagious virus. It was not immediately clear when he first tested positive, but he was at Trump campaign headquarters in Arlington, Va., on Tuesday afternoon with dozens of other staffers. He was not wearing a mask.

Meadows was frequently in close proximity to President Trump when the president had his own bout with the virus last month. Several other top aides contracted the virus around the same time as the president, including Stephen Miller, Kayleigh McEnany and Hope Hicks, but Meadows managed to avoid catching it in that time.

Meadows’s diagnosis was first reported by Bloomberg News, which said that campaign aide Nick Trainer had also tested positive. The White House is expected to conduct contact tracing for those in the building who had recent contact with Meadows.

It also coincides with the United States setting new records for most coronavirus cases reported in a single day. The country reported roughly 118,000 cases on Thursday, a record since the pandemic began.

The U.S. has the most reported coronavirus infections and deaths of any country in the world with 9.7 million cases and more than 235,000 deaths.

Meadows drew scrutiny last month for his comments after Vice President Pence’s staff saw its own mini outbreak of the virus. Meadows did not deny that he had attempted to keep the new cases private, and he told CNN that the government was not going to be able to control the pandemic and should instead be focused on developing vaccines and therapeutics.

Biden, who has made the Trump administration’s handling of the pandemic a cornerstone of his campaign for the White House, invoked the ongoing public health crisis in remarks on Friday night in Delaware.

“I want everyone to know that on day one, we are going to put our plan to control this virus into action,” he said, reading from prepared remarks. “That can’t save any of the lives that have been lost, but it will save a lot of lives in the months ahead.”