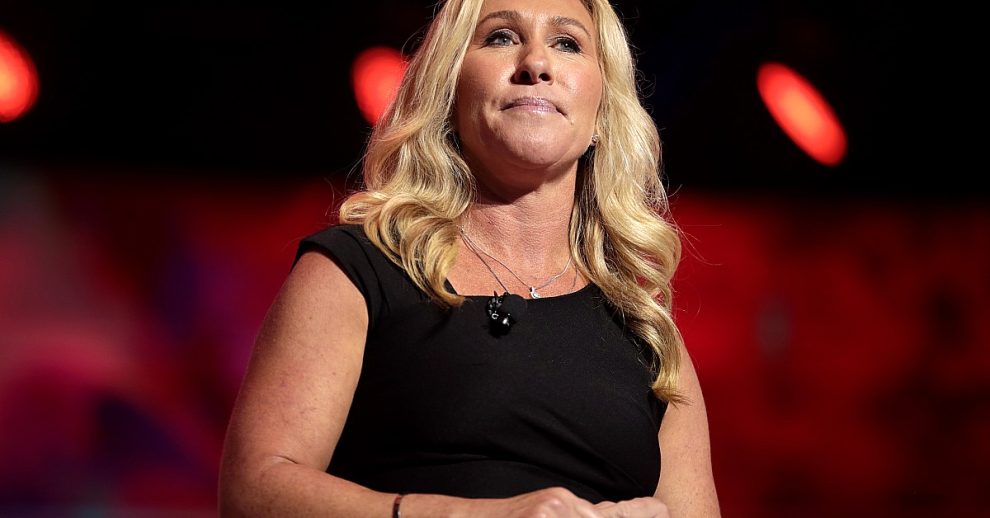 Representative Marjorie Taylor Greene joined Right Side Broadcasting Network’s Brian Glenn on Saturday evening to talk about the two swatting incidents that sent armed police to her home in the middle of the night, two nights in a row.

Greene showed the AR-15 that she almost took to answer the door saying, “something inside me said don’t take that with you. And that was like a really strong feeling, and I thought twice about it.”

They did this to her because she wants to protect American children and ensure that minors cannot be subjected to chemical castration and other life-changing operations by abusive adults who want to alter their gender.

Thank God she did not bring her weapon to the door as the police were looking for a woman holding a rifle.

popular conservative Representative Marjorie Taylor Greene was swatted Wednesday night at her home just after 1 AM.

Later that night, or early Thursday morning, they swatted her AGAIN!

“Swatting” is the action or practice of making a prank call to emergency services in an attempt to bring about the dispatch of a large number of armed police officers to a particular address.

We reported on the live interview where Marjorie Taylor Greene spoke to RSBN about this incident.

These SICK people wanted the Congresswoman to suffer death by cop.

This has happened to numerous individuals over the years where the police show up at a residence to later shoot and kill an innocent person by mistake.

NPR reported on a similar incident that led to the untimely death of Andrew Finch, an innocent 29-year-old man:

A Wichita, Kan., police officer who shot and killed a man in a “swatting” prank that went horribly wrong will not face charges over the incident, officials say. Andrew Finch, 28, died after a bogus 911 call brought police to his home days after Christmas.

In the 911 call last December, a man told police that he was calling from inside a Wichita house — and that he had just shot his father and was holding other relatives hostage. In reality, police say, the call came from Tyler Barriss, who was arrested in Los Angeles and charged with involuntary manslaughter.

This is not the first time Greene has faced attempts or threats on her life. “I’m at the top of the list as members of Congress of having some of the most death threats,” said the Congresswoman.

She also claims that she has been targeted inside her Washington D.C. office by leftists, including a Democratic Representative’s Chief of Staff who works a couple of floors above her. According to Greene, the man was arrested for vandalizing signs at her office, but he has not been fired.

“People want to kill me,” she said after detailing threats to her office, personal phone, and her family members’ personal phone numbers.

With threats like this, it would make sense for Greene to answer the door in the middle of the night, ready to defend herself.

Right Side Broadcasting Network shared never before seen security camera footage where police entered MTG’s home with their weapons drawn to respond to a reported murder.

Greene: I was really shocked, really shocked to hear a doorbell and knock at my door just after one o’clock in the morning, not expecting anyone to come over. No one should be coming to my home at that time. And I jumped out of the bed and I saw a flashlights going around outside my bedroom windows. I could hear people walking, and I was very frightened. I could see a little bit of lights outside, maybe a car light and that’s what I saw. And I thought, oh gosh, something’s going on. So I got dressed and that was when I was preparing to go out of my room. Now something I normally do, Brian, is I’m a gun owner, and I believe in protecting myself. I believe in protecting my home, protecting my kids, anyone that’s in my house. And if I’m gonna go to the front door and someone’s coming over and I don’t know who’s coming, I will bring a gun with me to the door. And so this is the gun that I have in my bedroom, and I picked it up, of course, to carry it with me to the front door. And I picked it up and I was ready and I was like okay, I’m gonna go out there. I don’t know who’s here. But, something inside me said don’t take that with you. And that was like a really strong feeling and I thought twice about it.

Glenn: Normally you would. You would think youre home, late at night…

Greene: Middle of the night. Yeah, absolutely. Because I don’t know who’s coming and I heard people outside my window. But something said don’t take this with you. So, I didn’t. I put it down. I put it back down in my bedroom. And that’s when I opened my bedroom door and went down the hall

It really upset me because usually, I mean, if police are coming to your house in the middle of the night, there’s a serious thing. I thought, gosh, I hope nobody in my family has been hurt or something happened to one of my kids because they’re away at college. And so that struck me as concern. But when I opened the door and greeted the officers, and I said, “what’s going on?” it was their demeanor and just their body language. They were tactical. They had guns drawn. They were prepared for something serious. And he asked me, “Is everything okay, ma’am?” But it was the way he asked me that had me upset, and I was like, “yeah.” I said, “I was sound asleep. I don’t know what’s going on what’s happening?” And they were all kind of looking at each other, and they called the sergeant around, and he came up, and he was asking me, he’s like, “is there anything going on in your house?” And I said, “not that I know of.” I said, “I was sound asleep. My family is sound asleep.” I said, “is there’s something wrong?” Because I just was so upset over what is happening. And they said, “well, there was a report, there was a 911 call.” And then he told me about the call, that someone had been shot in here, that there were children in the home and there was potentially going to be suicide or more murder. And then I realized, okay, no wonder they are reacting this way. And then he goes, “I think you’ve been swatted.”

Glenn: Do you think that was their intent? They wanted you to get accidentally shot by this.

Greene: Absolutely, 100% they wanted me to be murdered — death by cop. That’s what swatting is and they were doing this in hopes that the police would kill me.