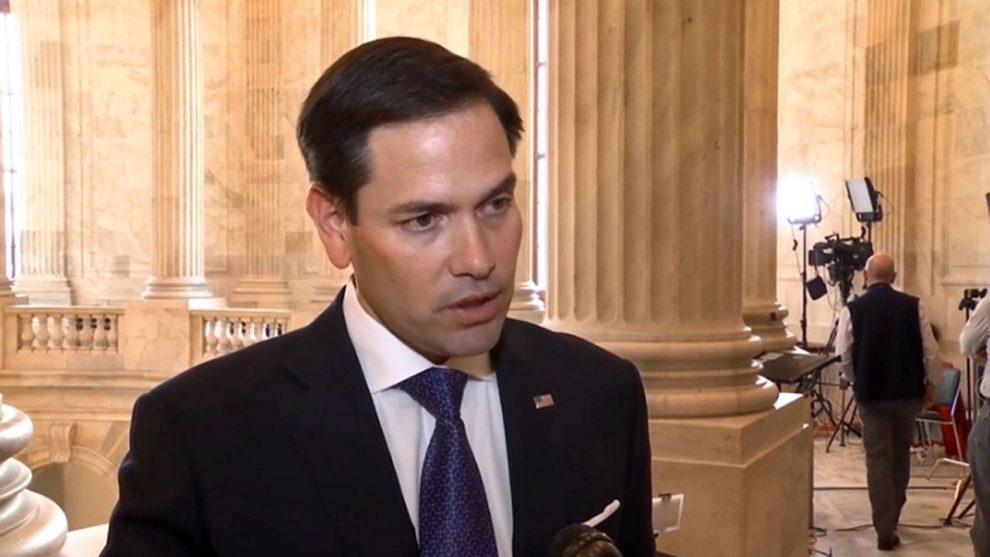 A military option to solve the political crisis in Venezuela is “always there” because too many rogue actors have established themselves in the country and could jeopardize U.S. security, Sen. Marco Rubio (R-FL) told Breitbart News in an interview Tuesday.

He emphasized, however, that the use of force against Nicolás Maduro’s socialist regime was not a first or preferable option, and that the current American role in the country is to support the Venezuelan people in their quest to restore their democracy.

They need international support, he argued, because Maduro has made it impossible for their president, Juan Guaidó, to exercise his legal powers by keeping him from administering state funds, controlling the nation’s military, or having access to the presidential palace, Miraflores. Guaidó struggles to access even the most basic resources to do his job both because of Maduro’s intervention and the fact that Venezuela is suffering shortages of practically every necessary good after two decades of socialism.

Guaidó became president in January after the National Assembly, the federal legislature, declared Maduro illegitimate. Maduro claimed to have “won” an election last May in which he blocked non-communist candidates from running, used violence to intimidate Venezuelans into supporting him, and even still managed record low turnout at the ballot. As Maduro’s last term ended in January, the election left a power vacuum the Assembly filled with Guaidó’s interim tenure, as the Venezuelan Constitution mandates.

President Donald Trump has repeatedly refused to dismiss the possibility of military action against Maduro, though his administration is not known to have taken any material steps towards troop deployment.

“That option [military intervention] is always there simply because the United States has a right to defend its national security and there are national security interests assigned to this,” Rubio told Breitbart News. “As an example, you have the presence of Russian military advisers on the ground … and not ten people, you’re talking hundreds … you have [the] potential of a permanent Russian naval presence.”

The government of Russia has established a significant military presence in Venezuela at Maduro’s invitation. Evidence suggests that Moscow has built a complex military infrastructure in the country, equipping Maduro with much of the ammunition he uses to repress peaceful protesters and deploying dozens of military specialists to help Maduro retain power. This weekend, Maduro’s Foreign Minister Jorge Arreaza suggested Maduro may soon request an even more “expanded” Russian military invasion of Venezuela.

An overwhelming majority of Venezuelans, 87.9 percent, believe Russia and Cuba have invaded and colonized Venezuela, according to a poll released by the Venezuelan firm Meganalisis this week. The same survey found 89.5 percent of Venezuelans support an international military intervention to oust Maduro.

Rubio identifies the presence of 5,000 portable man-portable air-defense systems (MANPADs), surface-to-air missiles believed to come from Russia, in the country as another threat. The top commander of Colombia’s armed forces, Gen. Luis Navarro, accused Maduro on Monday of providing MANPADs to members of the National Liberation Army (ELN), a Marxist terrorist organization operating out of Colombia.

The threats, Rubio argued, go beyond those tied to Russia.

“You have the likes of Hezbollah and Iran, and government officials who are more than willing – for the right price, but it’s not very high – to sell official but falsified travel documents, passports, so that terrorists can move around freely in the region,” he noted. “You have the open support of drug cartels who aren’t just tolerated, but cooperate and work alongside the regime … there’s a migratory crisis triggered by this regime that is destabilizing our strongest anti-drug partner in the region in Colombia.”

Any one of those threats could, at any time, require a military response, though Rubio states that the U.S. is not interested in taking that route if avoidable.

“Our focus here is on supporting the democratic aspirations of the people of Venezuela. And that is not a U.S. initiative, that is a Venezuelan initiative that they took on and that 53 other countries support. We are supporting a regional effort,” he said.

That effort appeared to reach a new climax last week when Guaidó announced that the military had abandoned Maduro and urged civilians to take to the streets to support the soldiers. Maduro resurfaced on television, dancing and claiming that Guaidó had lied. More than a week later, reports indicate that the military is in disarray as neither man completely controls it and soldiers do not know if their immediate superiors consider Guaidó or Maduro their commander in chief.

Guaidó needs help, Rubio tells Breitbart News, giving the opposition credit for the success of their efforts so far given their limitations.

“To be fair, Juan Guaidó has no instruments of formal power. He has no money, he has no bureaucracy, he has no security forces, he has no access to the media,” Rubio noted. “Any time he tries to speak or communicate on social media, they shut down the internet. He is operating under very difficult conditions. It’s not as if he can buy commercials and go on national TV and speak. Literally every time he holds a rally, they shut down the internet.”

Rubio adds that Guaidó also lacks “some of the basics we take for granted,” like easy access to gasoline for his car to get to opposition rallies around town. Even assuming he ousts Maduro, Venezuela will need help to reconstruct itself. A free Venezuela, Rubio explained, would need months to rebuild: “It’s not just holding elections, you’d have to remake the [Supreme Court] TSJ … you’d have to have a fair electoral commission that runs these elections, you have to allow freedom of the press so the candidates can communicate, you’d have to allow political parties to organize.”

“In the meantime, you’d have to have police officers, you’d have to deal with a bunch of street gangs, colectivos, that have had unfettered power to make crime all day in exchange for enforcing regime mandates when called upon,” he continued. “You’d need to start rebuilding the electric grid and having systems in place for people to access food, medicine, life basics, and I think that’s going to have to [require] a coalition of various actors.”

Operating alone with few resources, he adds, “it’s amazing they [the opposition] have gotten as far as they have gotten.”

The U.S. has been helping by sanctioning key regime figures, who had long enjoyed access to wealth and luxury abroad in places like Miami, Florida, and the Caribbean. Rubio confirmed Guaidó’s claims that key figures within the Venezuelan political elite are in talks to abandon Maduro and predicted that the situation is too uncomfortable for many of them to stay on his side.

“What has changed somewhat is that the level of desperation and despair is such in Venezuela at this point that even high ranking officials, I believe, have grown increasingly tired of living in a country that is always on edge,” Rubio said. “You could have all the money and the power in the world, but every time you go out on the street, everybody’s unhappy, and the rank and file underneath you are unhappy, and you just know it’s not a sustainable situation. And a growing number of them are prepared, and have been for a while, to move away from Maduro.”