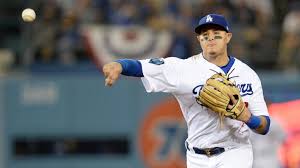 Manny Machado’s long free agency process has come to an end, as the star infielder has agreed to a 10-year, $300 million deal with the San Diego Padres, a person with knowledge of the situation told USA TODAY Sports.

The person spoke on the condition of anonymity because the deal had not yet been announced.

Machado’s deal is the biggest free agent contract in baseball history, overtaking the 10-year, $275 million deal that Alex Rodriguez signed with the Yankees after the 2007 season.

Along with Bryce Harper, Machado was one of the most coveted free agents this offseason.

See also  ESPN Anchor Hospitalized After Errant Tee Shot Hits Her in the Face
→ What are your thoughts? ←
Scroll down to leave a comment: