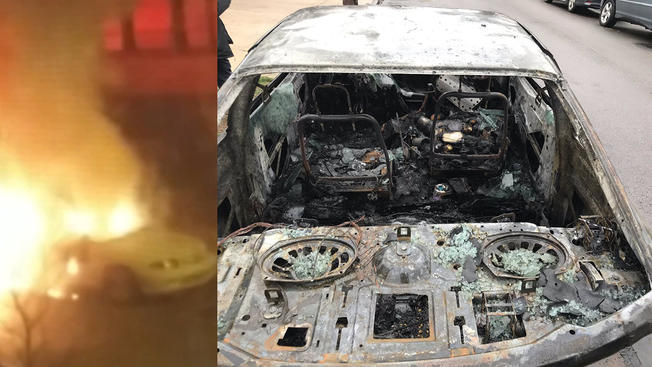 A woman says a cardboard cutout of Donald Trump inside her car caused an arsonist to target her vehicle in Philadelphia’s Manayunk neighborhood early Monday morning.

Police responded to the 4200 block of Pechin Street around 3 a.m. for a report of a vehicle on fire. When they arrived they found 65-year-old Laurie Livingston’s 2003 Chevrolet Cavalier fully engulfed in flames. The Fire Marshal ruled the incident an arson.

Livingston said her car had been vandalized three times before within the past five months. During those incidents, the tires were slashed and the windshield was broken. But while she’s unsure why she was targeted those previous times, she believes the latest incident was because of a cardboard cutout of President Trump that was in the front seat of her car.

“I put Donald Trump and I don’t care,” she said. “I voted for him and I have the right to say what I want to say and then last night at 3 o’clock it blew up.”

Police have not confirmed a motive in the arson.

Livingston told NBC10 she fears for her life. Other residents in the neighborhood were scared to speak out on the incident due to fears of retaliation.

If you have any information on the arson or previous incidents of vandalism, please call Philadelphia police.

See also  Democrat Florida Senate Candidate Val Demings Assaults Video Tracker, Sends Him to Hospital
→ What are your thoughts? ←
Scroll down to leave a comment: