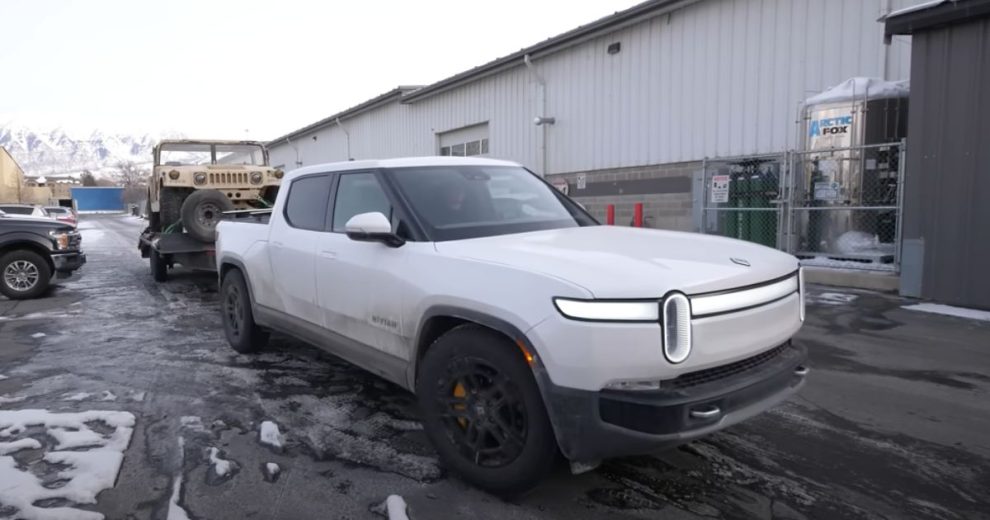 Electric vehicles underperform gas-powered cars in numerous ways, but the disparity becomes even starker when you haul a trailer in cold weather.

Rivian is a struggling EV company backed by Amazon and Ford.

Nelson discovered he was able to drive only 100 miles on a single charge while hauling his Hummer in cold weather.

That’s less than one-third of the Rivian’s 314-mile EPA range.

EPA range is the estimated distance an EV can travel before needing to be recharged, according to the Environmental Protection Agency’s testing methodology.

After his electric truck petered out, Nelson encountered numerous problems recharging it.

When he got to the first station, all the chargers were taken.

Nelson then drove to another station and was frustrated to learn that “it was the slowest charger in the world.”

At one point, the YouTuber noticed that his range meter was broken because it was providing inaccurate data.

“It’s charged zero miles, but it says it’s added 600, which is kind of embarrassing.”

Nelson continued: “Either way, it says it’ll be done charging in about 24 hours, so I’m going to be here a while. There is a faster charger up the road, but I would not have been able to make it.”

After charging his Rivian for 45 minutes, he learned that he had added only 10 miles of range. This is something that would not happen with a truck powered by an internal combustion engine.

Could you imagine sitting at a gas station for 45 minutes to fill up your car — only to discover that your tank was still mostly empty?

The driving range of EVs plunges 20 to 50 percent because their batteries slow down as the temperature drops or when there are heavy winds.

So if you live in a part of the country where the winters are cold and/or windy, you’d constantly have to recharge your electric car just to keep it from dying on you.

The mountain of problems associated with EVs also include spontaneous battery fires and an outsized environmental impact in their manufacturing process.

Lithium-ion batteries used to power electric cars are a safety hazard — even when the cars are not in use — because they generate a lot of heat and can spontaneously combust.

“The safety implications are the fact these batteries get hot,” H. Sterling Burnett of the Heartland Institute told CBN News last month.

Ironically, another major drawback of electric vehicles is how environmentally costly it is to produce them.

Left-wing activists claim EVs are better for the environment because they supposedly generate zero carbon emissions. In reality, their environmental impact is enormous.

Physicist Mark Mills, a senior fellow at the Manhattan Institute, told CBN that miners use heavy machines that burn diesel oil to dig up 500,000 pounds of earth just to make a single, 1,000-pound EV battery.

“All those emissions from all that energy usage to dig those materials up cause carbon dioxide to be emitted somewhere else,” Mills said.

“So when the electric vehicle is delivered to your driveway, it’s already arriving with massive emissions of carbon dioxide that you eventually pay off,” he said. “It’s kind of like an inverse mortgage by driving that instead of an internal combustion engine.”

To manufacture each EV battery, you must process

When you factor in everything from the high prices of electric vehicles to the environmental damage caused by their manufacturing process to their frequent recharging headaches, it’s no wonder that some Americans are hesitant to jump on this bandwagon.

President Joe Biden has openly stated that he wants to destroy the U.S. oil industry in order to advance “green energy” programs because they supposedly combat climate change.

When President @realDonaldTrump asks Joe Biden if he would close down the oil industry.

However, transitioning 332 million Americans from fossil fuels to so-called green energy will be inconvenient and expensive — and it isn’t even guaranteed to be better for the environment.