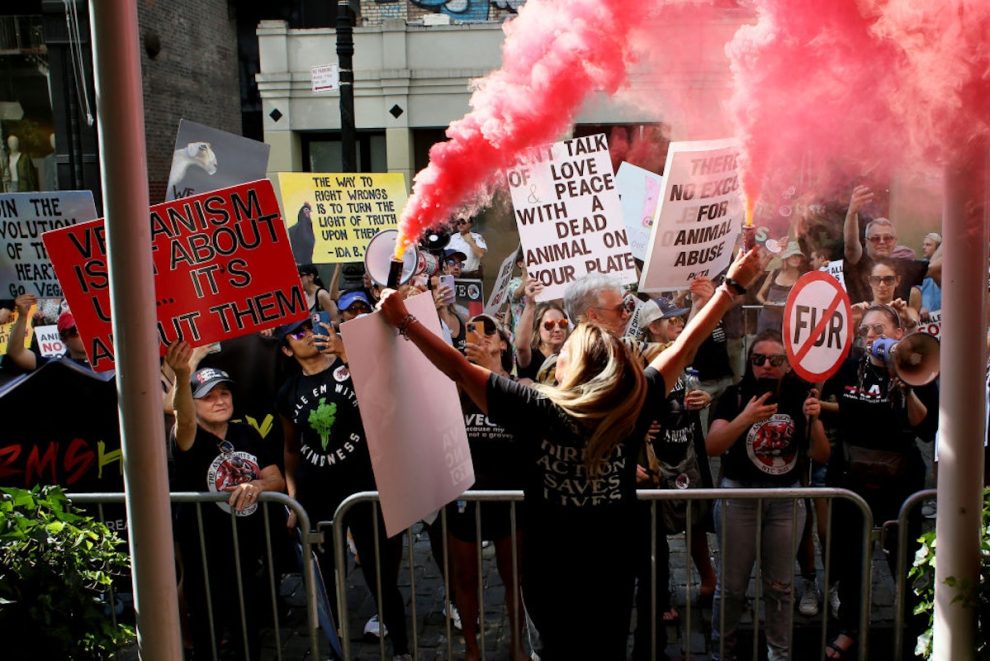 Freaking out a group of animal activist protesters, some of whom spilled fake blood on the sidewalk in front of the Nike, Dior and Louis Vuitton stores in Manhattan, a man walked over and calmly started eating his shish kebab in front of them.

His presence while eating meat catalyzed some incendiary responses. As posted on Twitter by @ViralNewsNYC, the video showed people screaming in his face.

“You’re disgusting. Who do you think you are? You’re a coward, you’re just a f***ing coward!” yelled a woman who identified herself later as an organizer of the annual Animal Rights March. “You’re a piece of s*** and you’re embarrassing. What am I going to do? Nothing, you’re going to die on your own.”

Another person ranted, “You and your small d*** and your p**** way of killing animals and it feels good in front of the vegans, huh? ‘

“You have all the blood on your face and on your hands,” the protester raged. “It feels good with your small d***.”

In front of Nike in #NYC where animal rights activists were rallying in front. A man comes off the streets and starts mocking the activists and eats Shushka Bob in front of the activists. Activists start yelling at the man#pita #animals pic.twitter.com/puQ1I9EJlV

More from the Animals rights protest that was held in NYC.
Activist chant in front of the Louis Vuitton in the Flatiron District of NYC. Activists state they demand that Louis Vuitton stop killing animals #AnimalRights #NYC pic.twitter.com/xe4DcrZPV0

Representatives from PETA, NYCLASS and the Humane Society attended the protest, The Daily Mail reported.

“I’m here because this is our chance as animal rights activists to come together once a year to celebrate our movement, to let the world know we are taking a stand together against speciesism, which is the idea that humans are superior to animals and we have the right to use them for our purposes,” Ashley Byrne, the director of outreach for PETA, stated. “And I think what we all want out of being here today is for people to think about their relationship and to realize that animals are individuals. There were created for their own purpose; they are thinking, feeling individuals just like us.”

Some responses on social media applauded the man with comments such as “Somebody get that man a beer to go with his shish kabob,” “This hero deserves an @alexstein99 award,” and “This would be me if I lived in NYC. I’d bring 50 of my buddies and have a giant BBQ. Dude … is a stud!!”

In March 2018, animal rights activists in Toronto conducting their fourth protest against a game-themed restaurant called Antler Kitchen and Bar got a response they didn’t expect: one of the co-owners of the restaurant, who was also a chef, brought out a deer leg to a table in the front window and started carving it in front of the protesters.

One banner held by a protester read “Murder” in large, hot pink letters; another demonstrator held a sign that read “please add vegan steak to the menu.”

The co-owner, Michael Hunter, who hunts moose and deer with a crossbow, not only carved the leg, but then sat down at the table and ate the meat in front of the protesters.