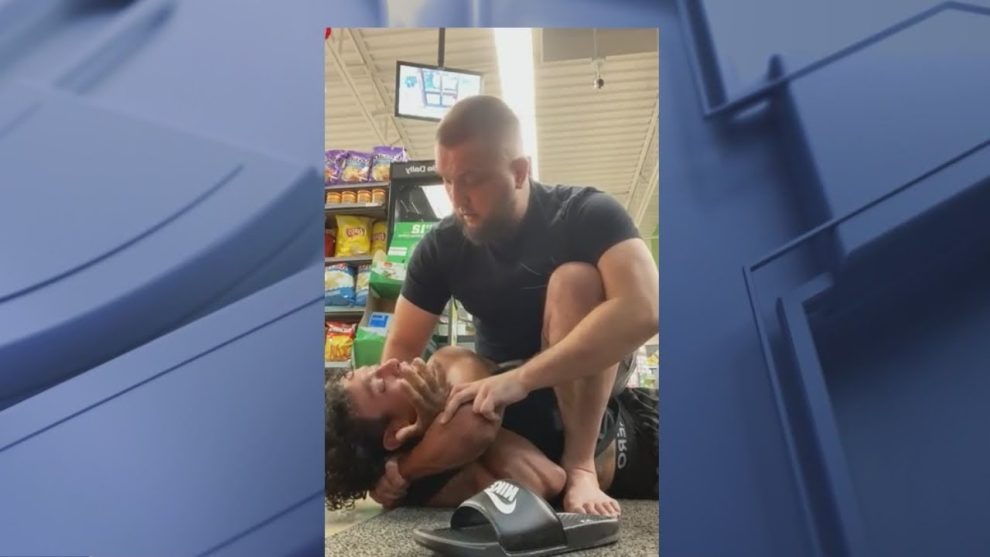 An unruly Illinois man recently found himself in a knot of his own making.

According to WFLD, last Thursday, 30-year-old Christoper Cruz was having an uninhibited day. He visited a local 7-Eleven and stole some merchandise.

When Christopher returned to the store that evening, a 19-year-old worker ordered him to leave. Christopher didn’t appreciate the directive, so he allegedly (apply that word to this entire story) punched the employee.

But before he did that, he did this: Amid harassing people in the parking lot, Christopher encountered Idriz Redzovic. Idriz had come to buy his six children slushies. Christopher offered a menacing “What are you looking at?”

Then Christopher assaulted the attendant, and Idriz intervened.

But before he did that, he did this: Idriz “grew up in the streets of Chicago.” He explained to Fox News:

So Idriz studied martial arts, earning his black belt in Gracie Jiu-Jitsu. And he opened Supreme Jiu-Jitsu in Chicago’s Lincoln Park neighborhood. He trained for 22 years before meeting Christopher.

In response to the attack on the store clerk, Idriz put his experience to use.

Idriz did something similar. From his dojo, he recounted to Fox 32:

“I jumped in, grabbed [Christopher] like I do in training here, put him down, flattened him like a pancake, and then I tied him up like a pretzel.”

He told Fox Digital, “My instincts kicked in. … [I] started to put him in a…jiu-jitsu hold, in a position called ‘gift wrap.’”

Solid indication your plan has gone awry: You end up tied in a knot with your own arms.https://t.co/tGrNHxgRTY pic.twitter.com/x1oLBvv8gs

Christopher asked for permission to be released. Permission was denied.

The instructor emphasized that he “did not hurt” Cruz because the “whole position” he pinned him in “is controlled.”

“Jiu-jitsu is such a beautiful art,” Idriz said, “that I don’t have to apply pressure. … If I had to hit him, I would hit him. … I could have easily escalated…into a chokehold, into an armbar, into another situation. But I had it under control.”

He shared with cops late to the scene, “I do jiu-jitsu… I train a lot of officers. He was harassing some girls right here, and I didn’t do nothing. He kicked the door — I recorded the video. And he started bothering this guy. And then he swung at this guy, started attacking this guy. And that’s when I jumped in and took him down to the ground. And I held him until you guys came. Maybe give him some water or something.”

Officers asked the store employee, “You want him arrested?”

Idriz wrote about the incident on his Facebook page:

I was getting Slurpees for my kids, and a lady came in complaining about the individual… I [looked] outside, and her friend was driving around [wrecklessly], trying to hit him with the car. And he was slamming his hand on her car, teasing her and saying crazy stuff. I was not sure if they knew each other because she seemed to be on something herself… I told her to jump in the car and just leave. She snapped at me for saying that… Then she took some windshield fluid and slammed it on my own car in front, trying to open it. I got her off.

Then I called the cops on both the girls and the guy. I stood back, minding my business. Then the guy [ran] up on me, talking crap and then said, “Are you Russian?” And (he) tried flexing on me, trying to pretend like he was going to swing at me. And I took a step back and didn’t engage. Then he walked into 7-Eleven, messing with the employee as I was standing outside just watching and waiting for the cops…

Then I saw him swing at the 7-Eleven employee. That’s when I jumped in to control him ’til the cops came.

“People can learn from this footage,” Idriz surmised, “that violence is not the answer. Get proper training like I have, and the world can be a better place.”

This is another reason why people shouldn’t drink alcohol or take drugs. I don’t drink because of my faith. I am a Muslim, and that’s why I was so calm — because (of) my faith and my 20-plus years of teaching and training jiu-jitsu.

As for the “footage,” Idriz recorded the entire 18-minute, 27-second episode — and livestreamed it.

The man indeed seemed very calm. Christopher, however, appeared all in knots.