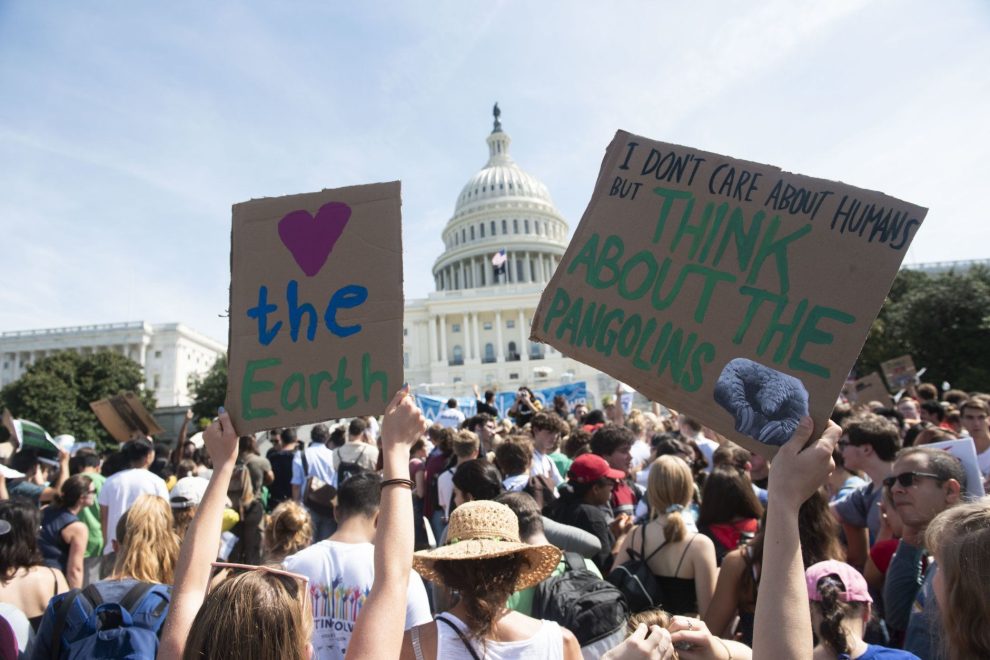 As cynical media members wring their hands and clutch their pearls over the real-world harms that can come from reckless rhetoric, they themselves should be held accountable for the damaging hyperbole they traffic.

Last week, the Irish state-funded media outlet RTE interviewed an unhinged climate alarmist who made the ludicrous assertion that eating animal products is simply a luxury we can’t afford because our climate is apparently at the breaking point. It’s a ridiculous, harmful type of misinformation the left-wing media loves to promote.

George Monbiot, a British writer and environmental activist, told the RTE interviewer last week that agriculture destroys “habitats,” is one of the leading causes of “climate breakdown,” and pollutes the air and water, among other terrible things. But “the biggest issue of all,” according to Monbiot, is that it uses up land that might otherwise be left for “wild ecosystems.”

Agriculture, Monbiot says, must be strictly curtailed if we are to save the planet from imminent destruction.

In order to prevent this sky-is-falling catastrophe that he so glibly predicts, Monbiot says we must “act as drastically within that sector as in any other sector to prevent the collapse of our life-support systems.”

What drastic action should we take, one might ask? Don’t worry, he has the answer: Shut down all livestock farming. All of it. And while you’re at it, shut down all the other farms too.

“We need to switch toward other sources of food,” Monbiot says, advocating a hard shift from eating fortifying steaks and delicious cheeseburgers to consuming “plant-based diets” and synthetic foods generated in labs. Yum.

Without switching to this full dependence on plant-based and artificial food sources, along with annihilating traditional farming, and (presumably) allowing the government seizure of farmland (to return it, apparently, to the local wildlife), the planet will simply become “uninhabitable.”

“Eating meat and milk and eggs is an indulgence we cannot afford,” Monbiot declares.

Of course, the nutty activist isn’t alone in his apocalyptic predictions and bizarre, extreme, anti-human demands.

Monbiot joins Bill Gates, the World Health Organization, Pope Francis, and other climate doomsdayers who likewise promote radical agenda items like the obliteration of private property, a disgusting dietary shift to insects and lab-grown meat, and a forced end to fossil fuel use, to save the allegedly dying planet.

Of course, it should be obvious the climate is “changing” — The climate is not and has never been static, a state of being which could hardly be surprising for a huge rock spinning madly through space at 1,000 miles per hour.

But attempts to pin down the climate’s latest moves, prevent its alterations, or attribute wildfires and floods to hyped up first-world climate sins, takes on a decidedly superstitious, rather than coldly scientific, flavor.

Similar predictions of imminent destruction have been made (and have failed to materialize) for decades. In the 1970s, “experts” said we would be frozen in a new ice age by now. In the late 2000s, failed presidential candidate Al Gore picked up the mantle as the narrative shifted from global cooling to global warming, misstating data by suggesting the Arctic would be ice-less by 2013 (spoiler alert, it’s not). Today, we have Greta Thunberg and her ilk to thank for a moral panic over generalized “climate change,” which is rapidly being rebranded as the “climate crisis.”

The claims of imminent planetary demise from which these admonitions spring is a particularly virulent form of “misinformation” to which the media is purposefully blind.

The nonprofit libertarian Competitive Enterprise Institute (CEI) has put together an amusing compilation of many failed environmental doomsday predictions beginning in the 1960s.

And yet, while media pundits and left-wing politicians and activists endlessly rattle on about the dangers of “harmful misinformation,” media outlets happily give a platform to the cacophony of voices that saturate the internet and airwaves with endless predictions of a future rife with famine and general misfortune unless we relinquish our vehicles, our homes, our meals, and any other freedoms we might still have lying around.

If the media wants to deliver a hefty blow to weaponized “misinformation,” “fake news,” and “harmful” rhetoric, its pressing priority should be to give climate fanatics the boot.

Instead, adherents of the climate cult are freely permitted to indulge in hyperbolic propaganda that has contributed to fear and anxiety among teens, precipitated a major drop-off in birth-rates in the developed world, and led to liberty-crushing political policies that are depriving people of their livelihoods in real time.

Young people are opting in large numbers not to place any hope in the future because they don’t want to further harm the planet, speed up the extinction of endangered species, or subject future generations to that warped vision of a future world so completely wrecked by human-caused “climate change” that it is virtually unlivable.

The media has been responsible for the shameless promotion of climate looneys whose obsession with ecological utopia, clear anti-human bias, and desire to reshape the world in their own image is driving a collective hysteria on par with the Salem witch trials and that one time we shut down the world over a cold virus.

As cynical media members wring their hands and clutch their pearls over the real-world harms that can come from reckless rhetoric, they themselves should be held accountable for the damaging hyperbole they traffic.