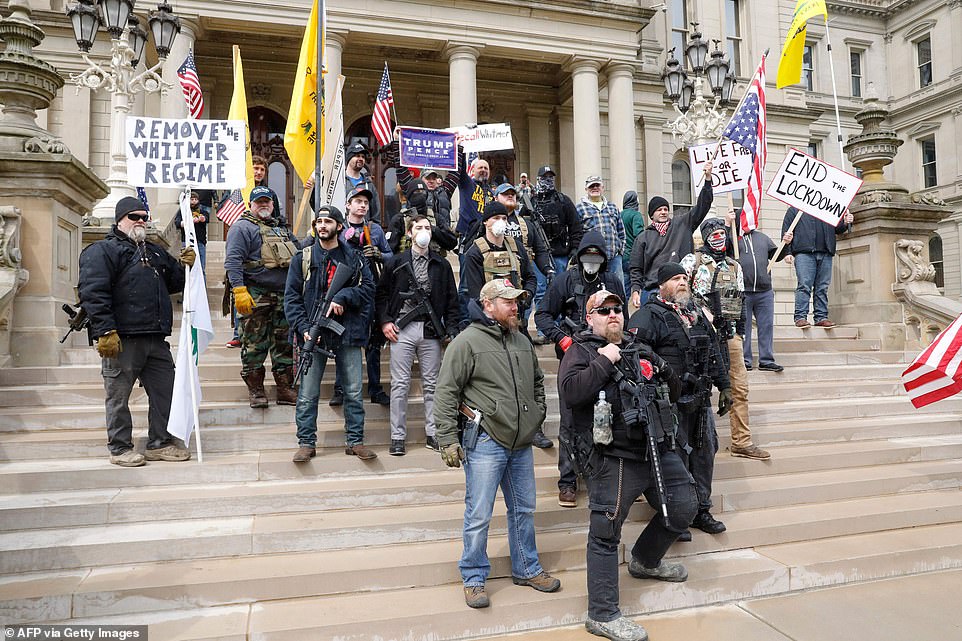 Militia members have gathered outside the Georgia Capitol and pro-Trump protesters have reportedly infiltrated the the Kansas statehouse, as riots over the president’s election loss erupt nationwide.

Violence broke out in Washington DC Wednesday after thousands of Trump supporters breached security perimeters at the Capitol with lawmakers inside the House Chamber urged to put on gas masks as tear gas was fired in the Rotunda.

In the hours that have followed, an armed militia has reportedly surrounded Georgia’s State Capitol building, 200 protesters have stormed into Kansas statehouse, and New Mexico’s and Texas’ State Capitols have been evacuated.

Large protests have also been reported in Colorado, Oregon, Washington state, Minnesota and Sacramento, while swaths of demonstrators have taken to the streets in LA outside City Hall, where an unlawful assembly has since been declared.

In Atlanta, Georgia Capitol Police escorted Georgia secretary of state Brad Raffensperger and his staff out of the building shortly before 3pm.

Supporters of Trump attempted to enter the building to deliver ‘written grievances’ about the outgoing president’s November election loss, according to the Atlanta Journal Constitution.

The development followed a small peaceful ‘Stop the Steal’ rally that stood in contrast to the mayhem that erupted in Washington.

The crowd consisted of around 25 people, some of whom were carrying assault rifles, and included some notable figures, namely former Ku Klux Klan leader Chester Doles.

Doles made headlines last month when he posed for a photo with Sen. Kelly Loeffler at a Republican campaign.

While voicing their anger at the outcome of the election, the demonstration was largely peaceful, according to local reports.

Elsewhere in the country, around 200 protesters rallied inside Kansas’ statehouse in Topeka on Wednesday afternoon.

The rally began in early afternoon and while most of the demonstrators left the capitol complex, a few dozen remained in the building with signs and flags in support of the president.

The crowd chanted ‘stop the steal,’ ‘four more years’ and ‘no more masks,’ a reference to many Trump supporters’ opposition to coronavirus restrictions such as requiring people to wear masks in public, KCTV reported.

A spokesperson for the KHP said they were not planning on heightening security in the statehouse building and that individuals in the building were allowed to be there.

It’s unclear if Gov. Laura Kelly was in the building at the time or whether she was evacuated.

In Los Angeles, an unlawful assembly was declared by officials amid a protest in the downtown area of the city, as crowds gathered outside City Hall and the LA Police Department headquarters.

Protesters, as elsewhere across the country, took to the streets as President-elect Joe Biden was set to be certified as the winner of the November election.

Dubbed the ‘Freedom Protest’ organizers of the event said it was being held to ‘demand the integrity and justice of the November 3rd election’, according to FOX 11. They said 15 ‘patriotic organizations’ were taking part.

‘The election was a quote-on-quote “stolen election,” I think there was a lot of fraud involved,’ the rally’s guest speaker Sarah Stephens said. ‘I don’t think Biden won in any way, shape or form. And so I believe Trump is the true president and that’s why I’m personally here today.’

Outside LAPD HQ, pro-Trump protesters reportedly clashed with counter-demonstrators as police pleaded with the crowd to leave the area.

By noon, the gathering was winding down, though protesters still scuffled with police and counter-protesters in scattered incidents.

One counter-protester, who was wearing a Black Lives Matter insignia on his clothing, was sprayed with a chemical irritant by a Trump supporter.

The anti-Trump group Refuse Fascism reportedly plans to hold its own protest in downtown Wednesday afternoon.

The group is planning to unfurl a banner over the 110 Freeway at Seventh Street, proclaiming, ‘Trump Lost! Fascists Get Out!’ at 12:30 pm local time.

The New Mexico Statehouse was largely evacuated Wednesday afternoon as a crowd of hundreds of protesters gathered outside the building.

Heeding warning from the scenes in Washington DC, Democratic Speaker Brian Egolf said state police ordered the evacuation of the building that includes the governor’s office and secretary of state’s office, though some officials remained inside.

Caravans of Donald Trump supporters arrived at the building in cars, trucks and on horseback at midday.

A spokesman for Gov. Michelle Lynn Lujan Grisham told NEWS13 said there was no indication of threats and unrest at the Statehouse, with the protest currently peaceful.

Similarly in Texas, the state’s Department of Public Safety evacuated and closed it’s Capitol building in Austin, in addition to surrounding grounds after the protests erupted in DC.

An official with the law enforcement agency confirmed the move in a statement to The Texas Tribune.

‘The Capitol and Capitol Complex are closed to the public effective immediately,’ spokesperson Freeman Martin said.

A dozens strong crowd has gathering outside the state’s Capitol as of mid-afternoon Wednesday, but a spokesperson with the Austin PD confirmed the crowd has been ‘calm and peaceful’ with no disturbances reported.

Hundreds also gathered for a peaceful demonstration in Olympia, Washington, as chaos continued to reign in the nation’s capital.

Around 300-400 people attended the rally, according to Washington State Patrol estimates. The group, which was gathered at noon local time, sang ‘God Bless America’ and chanted USA, KING5 reported.

Although many of the protesters questioned the validity of the presidential election, they said they have no intent on violence or entering the Capitol.

Many of the protesters said they wanted more transparency around the election, including an audit of the results.

Guest speakers at the event, meanwhile, which included Joey Gibson, a leader of the far-right group Patriot Prayer, continued to repeat unfounded allegations of election fraud and railed against pandemic restrictions.

At one point during the gathering, a participant interrupted Gibson with news that the crowd in DC had stormed the Capitol. ‘It’s war now!’ he yelled, according to the Oregonian, but received a muted response.

A several hundred strong crowd gathered in Lansing, Michigan also Wednesday. Many among them were armed and dressed in military fatigues or tactical gear.

More than a dozen carried rifles slung over their shoulders. Others carried US flags, Trump flags, and signs with messages such as ‘Stop the steal’ and ‘Fake virus’, according to the Detroit Free Press

Organizers blasted over the Capitol lawn in Lansing a live feed of Trump’s remarks to thousands of supporters at the Ellipse, near the Capitol. However unlike in DC, nobody in the crowd attempted to storm their way inside the their state’s Capitol.

Police estimated the crowd to be between 700 to 800 people, but said they’ve ‘been very cooperative from our perspective, with no problems at all.’

‘They’re just exercising their First and Second Amendment rights,’ a spokesperson for the department said.

Over a dozen court challenges to Michigan’s election results have been rejected by judges, after finding no evidence of election fraud. Biden beat Trump in the state by more than 154,000 votes.