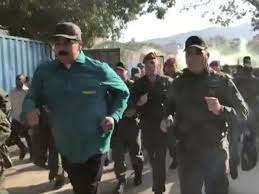 Venezuelan dictator Nicolás Maduro once again posted videos of himself Wednesday appearing to train with his armed forces to prepare for an allegedly incoming U.S. invasion, this time participating in what appear to be cardiovascular exercises and training with the national air force.

Maduro has managed to retain control of much of the military since the nation’s legislature, the National Assembly, deposed him and replaced him with current President Juan Guaidó, as mandated by the Venezuelan constitution.

“I am just another soldier in our dignified [Bolivarian National Armed Forces], ready to give my life, if necessary, to defend every palm of our sacred Fatherland,” Maduro wrote on Twitter, posting the video of his exercises. The video begins focused on Maduro, who appears to lift an arm while marching out of rhythm with the rest of the soldiers, but rapidly turns away from Maduro’s form to focus on the troops.