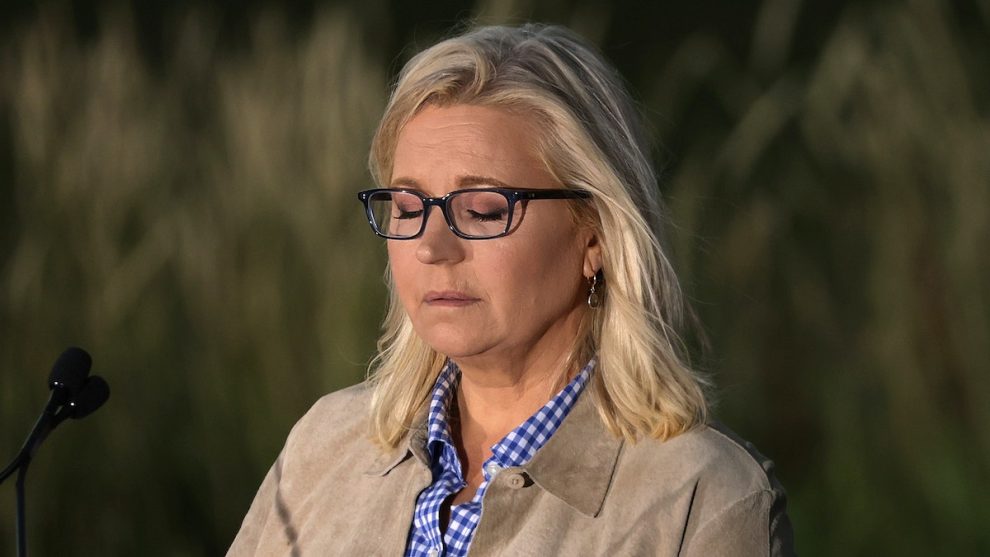 Rep. Liz Cheney (R-WY) was mocked Tuesday night for comparing herself to former President Abraham Lincoln after her blowout loss in Wyoming’s Republican primary for the state’s at-large congressional seat.

With greater than 95% of the votes counted, Cheney lost by more than a 2-to-1 margin, 66.3% to 28.9%, to Harriet Hageman, who was backed by former President Donald Trump.

“Tonight, Harriet Hageman has received the most votes in this primary, she won,” Cheney said during a speech following her loss. “I called her to concede the race, this primary election is over. But now, the real work begins.”

Cheney then proceeded to compare herself to Lincoln and to Union General Ulysses S. Grant, who later went on to become America’s 18th president.

“The great and original champion of our party, Abraham Lincoln, was defeated in elections for the Senate and the House before he won the most important election of all,” Cheney said. “Lincoln ultimately prevailed, he saved our Union, and he defined our obligation as Americans for all of history.”

Several minutes later, Cheney continued, “In May of 1864, after years of war and a string of reluctant Union generals, Ulysses S. Grant met General Lee’s forces at the Battle of the Wilderness.”

“In two days of heavy fighting, the Union suffered over 17,000 casualties,” Cheney continued. “At the end of that battle, General Grant faced a choice. Most assumed he would do what previous Union generals had done and retreat. On the evening of May 7, Grant began to move. As the fires of the battle still smoldered, Grant rode to the head of the column. He rode to the intersection of Brock Road and Orange Plank Road, and there as the men of his army watched and waited, instead of turning North back towards Washington, and safety, Grant turned his horse south toward Richmond, and the heart of Lee’s army. Refusing to retreat, he pressed on to victory. Lincoln and Grant and all who fought in our nation’s tragic Civil War, including my own great, great grandfathers, saved our Union.”

Cheney was widely mocked on social media following her blowout loss to Hageman as many conservatives especially took issue with her Lincoln comparison.

“Liz Cheney tried to make herself a martyr at the expense of our country and our party,” Wesley Hunt, a Republican candidate for Congress, tweeted. “Comparing yourself to Lincoln doesn’t change that. The comparison is as tone deaf and ridiculous as her seat on the January 6th Committee.”

“1. Dropping ads across Wyoming against Liz Cheney was one of the most fulfilling professional tasks I have had to date in politics,” Florida GOP Vice Chairman Christian Ziegler tweeted. “2. No chance this woman has a shot at President. Kasich 2.0 3. This should sunset the Cheneys from anymore politics. Thankfully.”