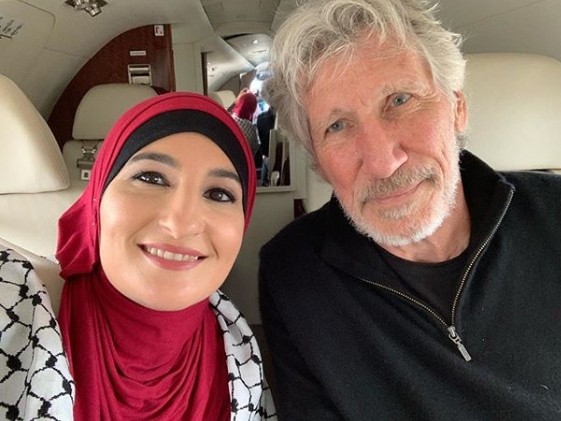 TEL AVIV – Women’s March leader Linda Sarsour was ripped on social media after posting a selfie with Roger Waters on a private jet with an accompanying text extolling the Pink Floyd frontman’s “empathy” and “personal risk” in standing up for the Palestinians.

Kind, compassionate, humble, active listener — that’s Roger Waters. I spent the entire day with him yesterday and we had great conversations about injustice, empathy, morals. He listened intently as I shared with him my story, what I believe, what hurts, what we must do to make this world a better place. We won’t always agree on everything but Roger Waters has taken great political and personal risk to stand up for the Palestinian people. When he speaks of what he experienced visiting Palestine and continuing to see the circumstances of Palestinians in Gaza and the West Bank – tears well up in his eyes. He treated me as an equal and I am forever humbled to have experienced him as a human being who is much more than a rock star or entertainer — but a man full of empathy struggling to live a life worth living. #pinkfloyd #Palestine#rogerwaters #bds

Sarsour came under fire for the post, with social media users accusing her of hypocrisy while others poked fun of her for calling Waters brave.

“Political and personal risk. So brave and insightful! Remember that time the New York Times published an anti-Semitic cartoon and a bunch of angry Jews broke into their offices and murdered a dozen people?” one user wrote sarcastically, referencing the Charlie Hebdo terror attacks that came after the iconic magazine published cartoons of Islam’s prophet, Mohammed.

“They were meant for each other, like two peas in an anti-Semitic pod, driven by their unbridled hatred, bigotry and anti-Semitism,” he told Breitbart News.

Ostrovsky went on to note the hypocrisy in crying “oppression” from a private jet.

“I also find it incredibly ironic that two people, who claim to be so grounded with the ‘person on the street,’ never missing an opportunity to preach about ‘injustice’ and ‘oppression,’ chose to spread their message of hate and intolerance from the opulence of a private jet, just further underscoring how out of touch with reality both are,” he said.

Sarsour and Waters on Saturday were panelists at an event at the University of Massachusetts in Amherst, called “Not Backing Down: Israel, Free Speech, and the Battle for Palestinian Human Rights,” that claimed Palestinian voices were being silenced. The event went ahead after a judge denied an injunction request from three Jewish students calling for its cancellation over claims it was anti-Semitic.

Sarsour has in the past claimed American Jews “masquerade as progressives but always choose their allegiance to Israel over their commitment to democracy and free speech.”