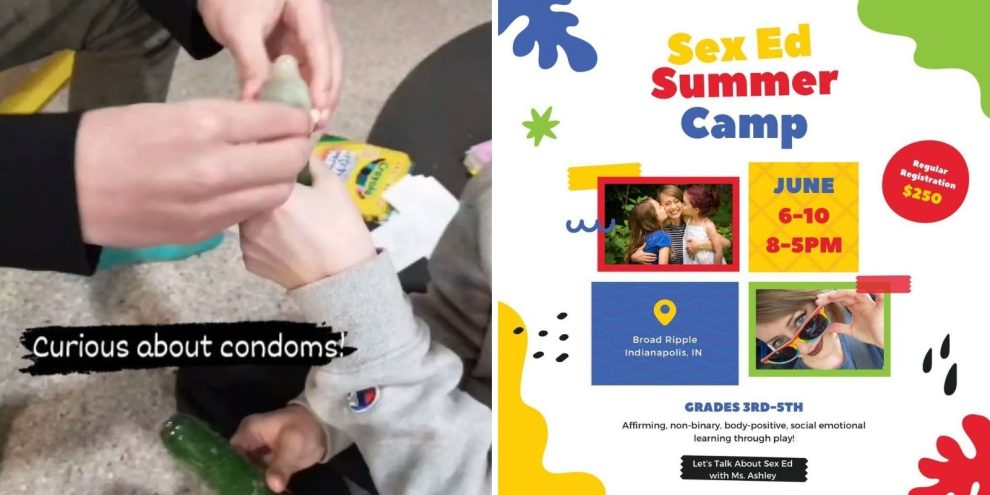 A summer camp in Indianapolis, Indiana, devoted to sex education for third-grade through fifth-grade children is organized by an “inclusive sexuality educator” who advocates for minors to “explore” condom usage, “kinks,” and pornography.

The sex education-themed event set to take place from June 6 – 10 at Half Liter BBQ & Beer Hall is billed as an exclusive summer camp for students in third grade through fifth grade, according to the password-protected Eventbrite page.

Acording to the event flyer, the summer camp is further described as “Affirming, non-binary, body-positive, social emotional learning through play.”

Kids at the summer camp will not be divided by gener when learning about puberty and sex, according to the FAQs section, because gender “is a spectrum and not a binary.” In addition, kids will see a condom demonstration: “At this age, kids are primed for level-headed learning. They are information-gatherers. There is no shame or ickiness associated with using bandaids and that same philosophy is applied to condoms and other barriers in this body-positive curriculum.”

Regular registration for the week-long 8 am – 5 pm sex ed summer camp costs parents an eye-popping $250, according to the colorful event graphic.

All families participating in the event must attend an orientation on May 28 where parents will sign “behavior agreements,” enrollment paperwork, and waivers.

An entire summer camp devoted to Sex Education for 10-12 year olds. Indianapolis is having an absolutely normal one. pic.twitter.com/47qAOvPbdh

The team of instructors has enlisted an IndyPride board member, a Purdue University graduate with a bachelor’s degree in gender and sexuality studies, and a trans queer staffer. Event organizers are still hiring high school assistants.

To access the private event portal, parents seeking to enroll his or her elementary-aged child must request the password from the Eventbrite organizer, Our Whole Lives curriculum facilitator and “sexuality educator” Ashley Robertson.

Our Whole Lives is a series of comprehensive sexuality curricula for youth and young adults published by the Unitarian Universalist Association. The sexuality education lessons are broken down by age groups, including for children in kindergarten through first grade (K-1) and fourth grade through fifth grade.

Kinnett is a former STEM teacher at Indianapolis Public Schools who was placed on administrative leave and later fired in December after he called for transparency over the teaching of critical race theory in the district’s classrooms.

The group’s About section says Robertson operates “under the assumption that stigma doesn’t belong in sex ed.” She adapted the Our Whole Lives (OWL) “sexuality education” curriculum to facilitate classes and workshops in the Indianapolis-area “in a whole new way appealing to all learning styles.”

“My interactive, engaging, fun workshops make this topic palatable and accessible” Robertson wrote. She noted that during a recent course of hers, one particular student commented, according to Robertson: “I’ve been in school for years and I think I’ve learned more useful stuff in this class in just a couple weeks!”

Purple for Parents Indiana, whose mission is shining a spotlight on the sexualization of children in the public education system, had exposed Robertson’s “perverse grooming” of kids and the “child grooming camp for minors.”

The parent group said the Eventbrite link was locked down after they’d posted a “parental alert” informing members that the “grooming techniques” such as Robertson’s are the same ones used by sex traffickers and pedophiles alike.

A parent with a “Sometimes Antisocial, Always Antifascist” profile picture frame commented on Robertson’s post: “Well, my kiddo is excited to attend. I’m sorry those bigots are coming after you.” Robertson then reacted with the heart emoji.

The DEI reviewer from Pearson, assistant prof. of teacher education from Eastern Michigan University, counselor at Fishers High School, and a whole lot more you should look through for yourself.

One of Robertson’s “educational” posts in November claimed that “Kids are no different” than adults when it comes to experimenting with condoms.

“Are YOU comfortable with condoms? What is the only way to get comfortable with the unknown? Exposure. Practice. Opportunities. Pushing out of your comfort zone. Kids are no different. Have your kids have the opportunity to explore condoms? It takes many repetitions before kids master knowledge. This means they should have MANY exposures to condoms, why we need to use condoms, and how to use them. Make it fun! Take the pressure off,” Roberson wrote on Nov. 8.

Robertson uploaded a censored photo of a child with braids in a Minecraft hoodie stretching a condom out with her bare hand, squeezed into it like it’s a glove.

She posted the same photo to Instagram with a different caption describing what happened when she cleaned out her top dresser drawer as “a sex-positive parent.”

Robertson explained to her child that condoms have lubricant on them because, “Lube makes them slimy” and “It makes it easier to get inside the vagina.”

“Condoms should be stored where kids and youth have access to them. We don’t hide bandaids so don’t hide condoms either,” Robertson wrote on Instagram.

“Tell your kids to use CONDOMS on all insertables,” Robertson captioned an Instagram photo of herself posing with a giant carrot in October. “There are so many ‘prevertable’ [sic] items and most of them aren’t things you can sanitize.” 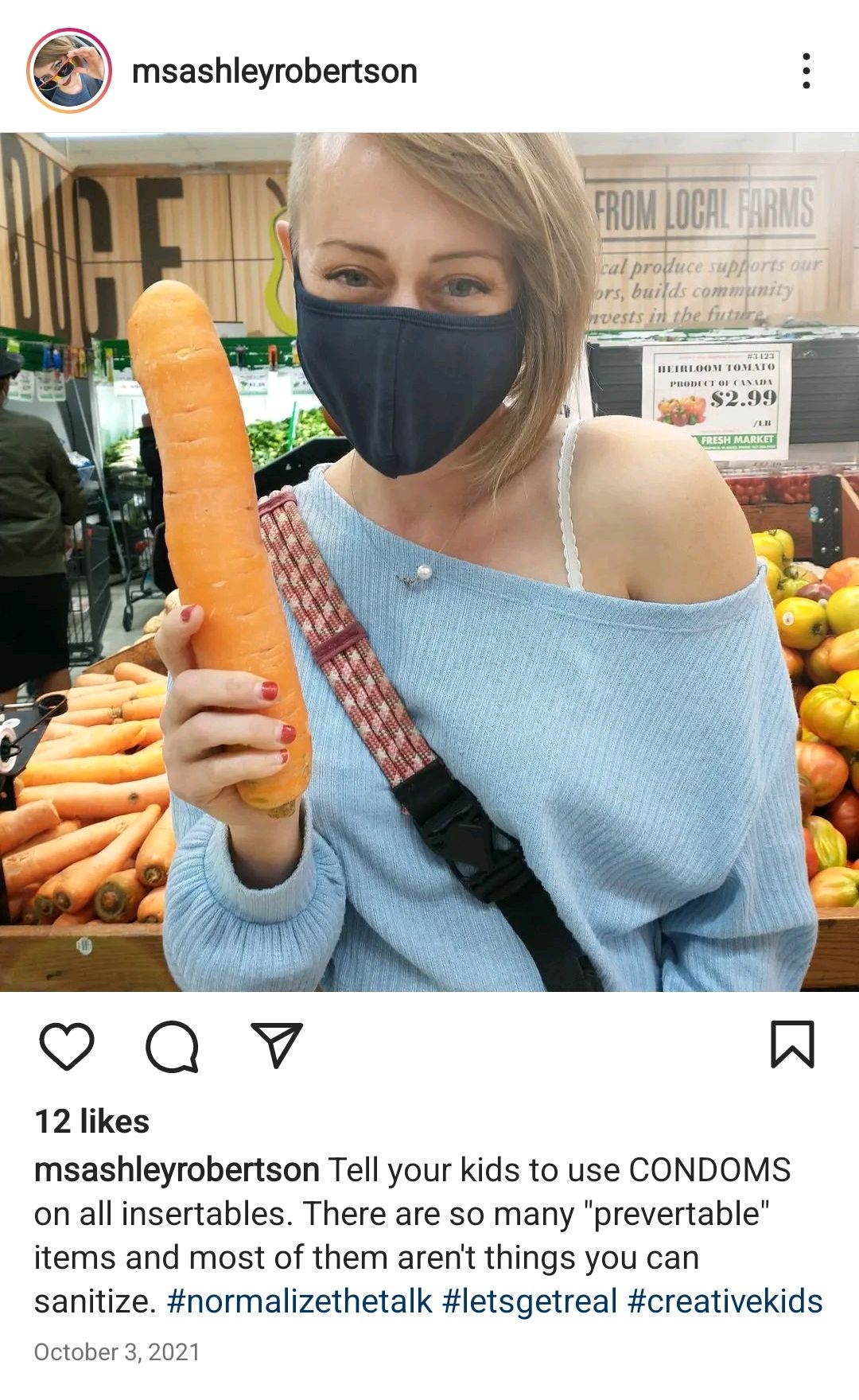 In an anniversary post marking two years since Robertson demonstrated condom use with a Girl Scouts troop, she instructed parents how to approach the matter.

“Do you have a kid? Have you had them open a condom yet? It doesn’t have to be gross or weird. Imagine you’re explaining how a band-aid works. With that frame of mind, just do it,” Robertson wrote. In the sample script she typed, Robertson told parents to teach children how to place the condom “onto the penis or toy.” 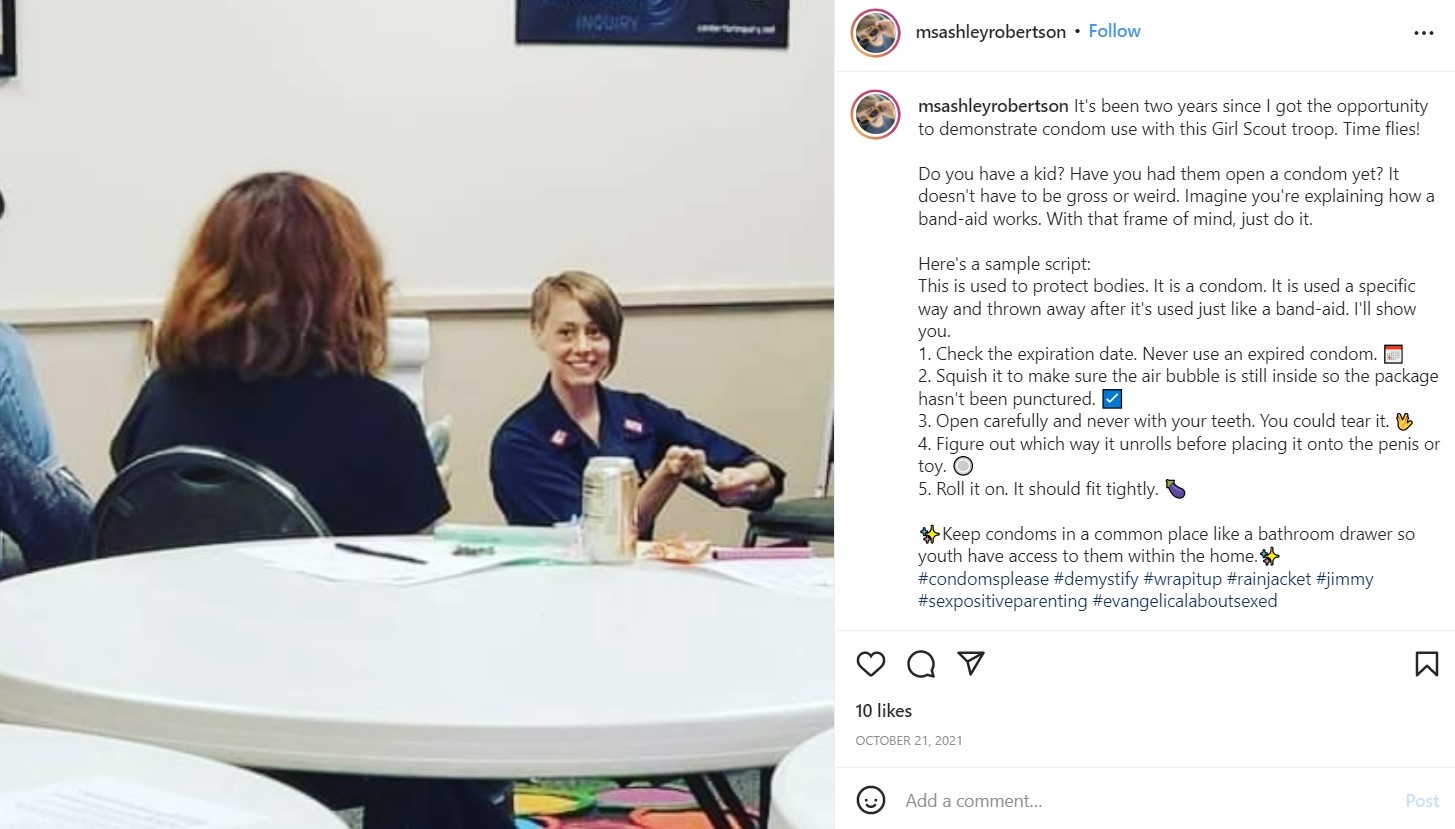 Robertson posted an Instagram video depicting a child holding two cucumbers with an adult rolling a condom onto one of them. A box of Crayola crayons sits in the background. The next slide shows a pile of condom-wearing cucumbers.

“Does your 6th grader know how to use a condom?” Robertson wrote on Feb. 15. 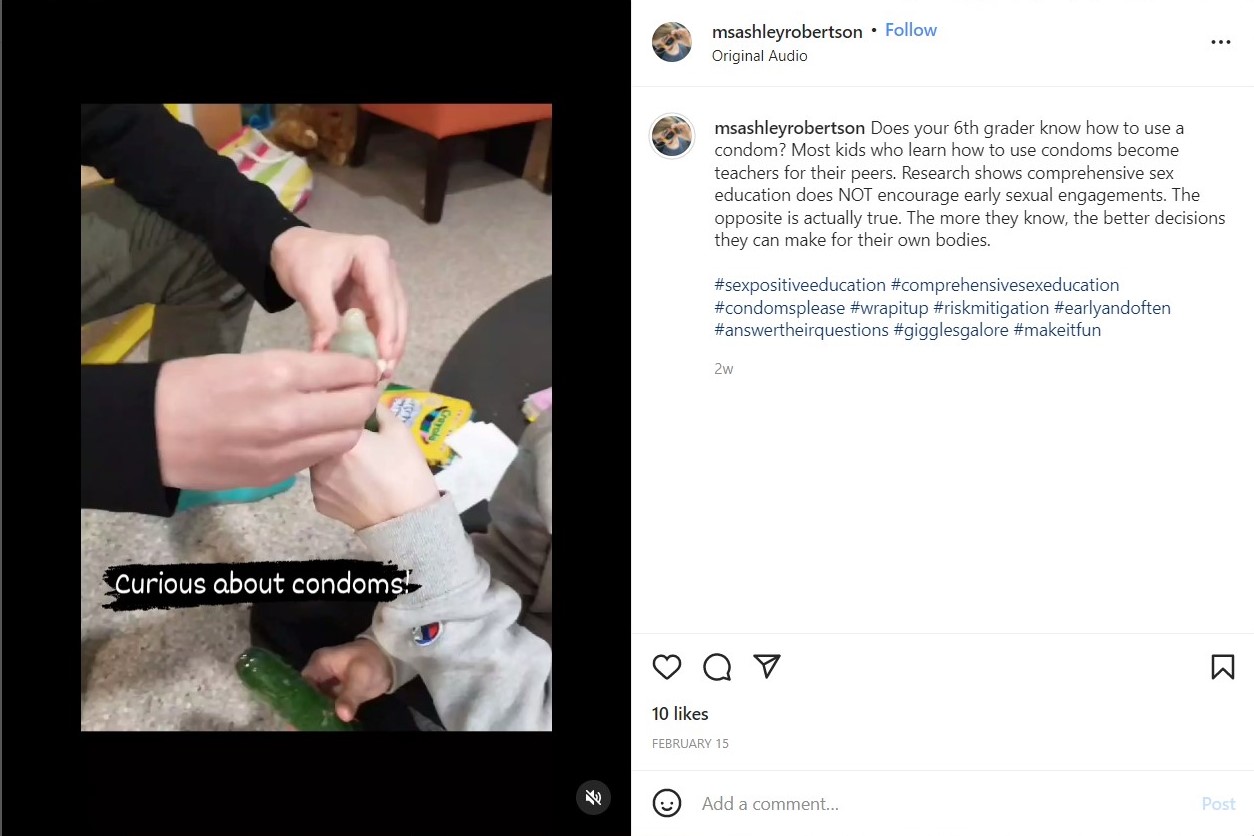 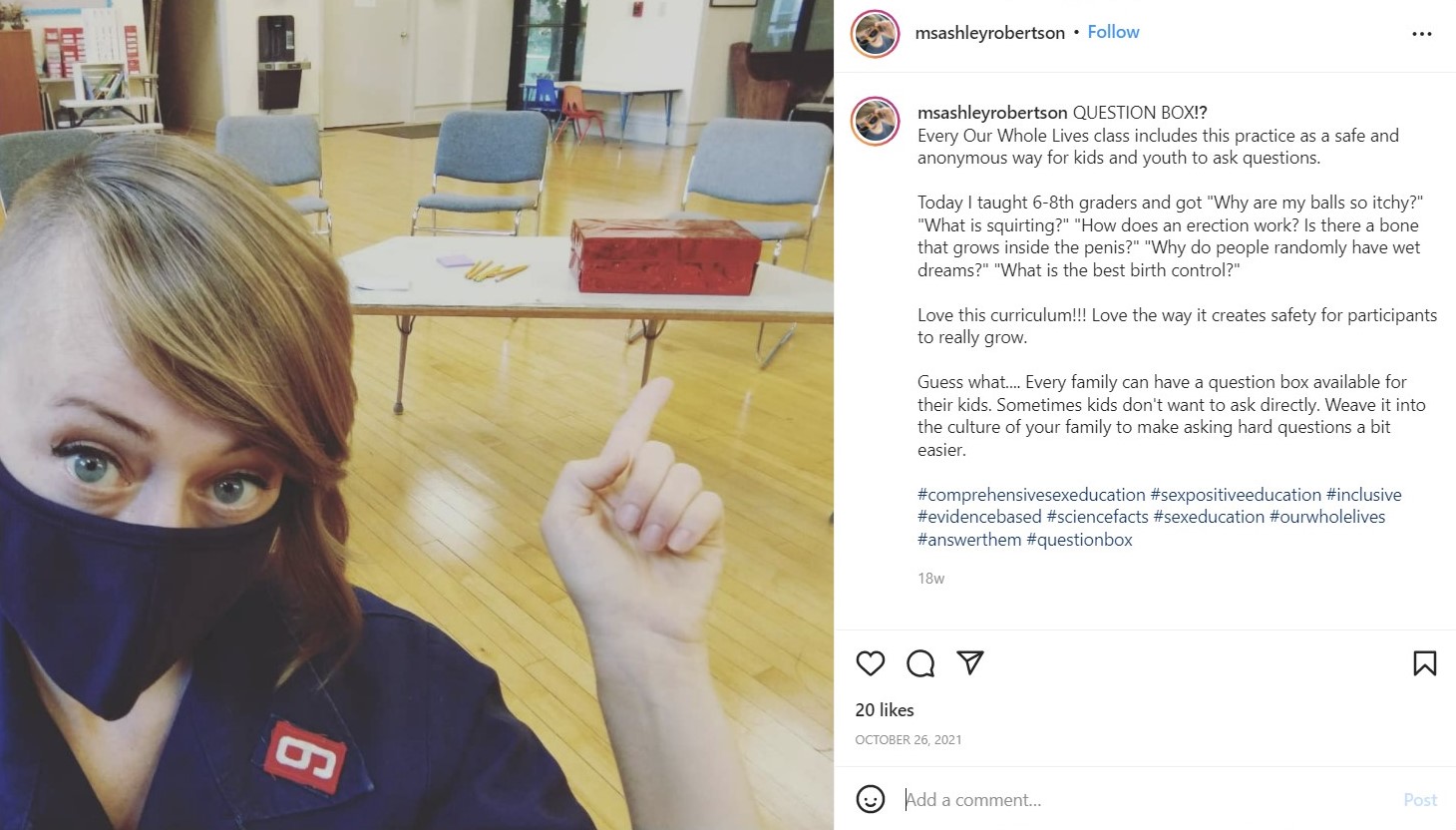 In the Facebook group’s Discussion section, Robertson announced in mid-January she tested positive for a sexually transmitted infection (STI). Choosing to “take control of this narrative,” Robertson applauded herself for testing regularly and discovering the infection fast,” I’m buying donuts. I’m celebrating. I’ve got a curable sexually transmitted infection. I’m going to toast myself and science!”

“I won’t succumb to the stigma associated. I won’t slut-shame myself,” Robertson continued, mentioning that her “partners and meta” consented to her disclosure.

Then she linked statistics showing the rates of reported gonorrhea cases in the United States in 2019, by age and gender, hinting that’s what she contracted.

Robertson concluded the Jan. 17 post: “Guess what… Now I get to empathize from experience when/if this enters my kids’ narrative. That ain’t half bad.” 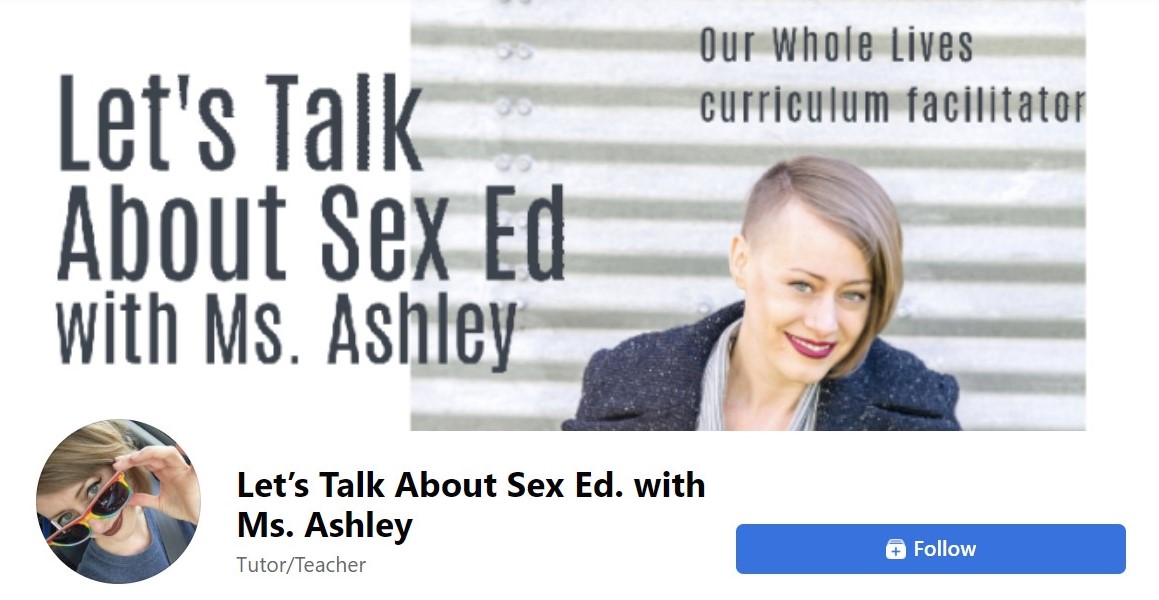 The self-described “childcare expert” has hosted a laundry list of classes, including an online and international “Sexuality, Sex, & Orgasms” workshop led by Robertson, a featured presenter, that took place in early Februrary.

“Enjoy 20+ video classes full of amazing, juicy (and realistic) pleasure techniques that absolutely anyone can use to become a confident, amazing lover,” the virtual learning event’s website tells participants, who had signed up for the Feb. 4 – 6 weekend to learn how to achieve “mind-blowing orgasms and awesome sex!”

Back in June, she was a special guest on a Facebook Live discussion hosted by Facebook group “Let’s Talk Polyamory” where they outlined “How to Talk Relationship Diversity, Sex, Kink, and Awkward Stuff with Kids and Youth.”

Robertson’s sex education students can be as young as potty-training age.

Later in August, she made a guest appearance on “Multiamory,” a member of “Pleasure Podcasts,” for an episode on “Kids, Consent, and Sex Education.”

At the time, Robertson had been teaching the Our Whole Lives curriculum for the past five years and had opened an in-home daycare, she said in the episode.

On the hour-long podcast, Robertson discussed greater access to pornography for viewers under the age of 18, citing a workshop in the high school curriculum stating that pornographic images and videos are for adult viewership only.

“It’s a little lean for my opinion…” said Robertson, according to the Multiamory episode transcript released Aug. 31, 2021. “I say that that’s lean because I think that that is the law, but the reality is that youth have access to a lot of things.”

Robertson and the podcast hosts then acknowledged they’d “definitely” and “absolutely” watched pornography before they’d reached the legal age.

Robertson urged for a more relaxed and “collaborative” parenting-style in which parents tell their children: “It’s my job as your parent to acknowledge those needs and meet your needs, so how can we do this and figure this out together.”

“In those situations, even for elementary school kids, there are resources for age appropriate images that kids can see,” Robertson insisted. She said, as an example, in the Our Whole Lives elementary curriculum, each child is supposed to have “a doodle journal” for drawing “penises and boobs vulvas and butts.”

One of the podcast hosts replied: “Fun.”

“Yes…” Robertson answered, noting it’s a place where it is “safe and acceptable” for children to “explore.” Robertson pivoted to state that curious high schoolers should have “accessible resources” for “fulfilling that need”—”especially erotica.”

At another point during the discussion, Robertson said that if a child is “curious about kink, be excited, because they’re curious about themselves.”

“That’s the first thing to celebrate with them,” Robertson said, adding that it’s best to find out what the child already knows first about the explicit subject.

Robertson recommended “sensual play” for a teenager “interested in trying some things” as the “first thing that you want to tell your kid to try out.”

“You can phrase it as if it’s kinky, but really, it’s just the stuff of sex. It’s like, do sensual play and see what your partner likes and see what you like,” she said.

Robertson said that if it’s “billed as kinky,” then maybe that includes a “hairbrush” or “ice cubes,” adding: “Ooh, that’s so kinky, but it’s still safe, it’s sensual play.”

A parent reached out to Robertson following the podcast interview to express that they’re polyamorous and have been preparing to start talking about sex and “our lifestyle” with their three children all under 12-years-old. The parent, thanking Robertson for her parenting advice, revealed that their oldest son went through their phone and found conversations as well as photos he wasn’t supposed to see.

“I am so thankful for this kind of feedback!” Robertson wrote on Facebook, sharing a screenshot of the parent’s message full of praise. Robertson then pounced on the opportunity to promote her availability for private calls and peer coaching.