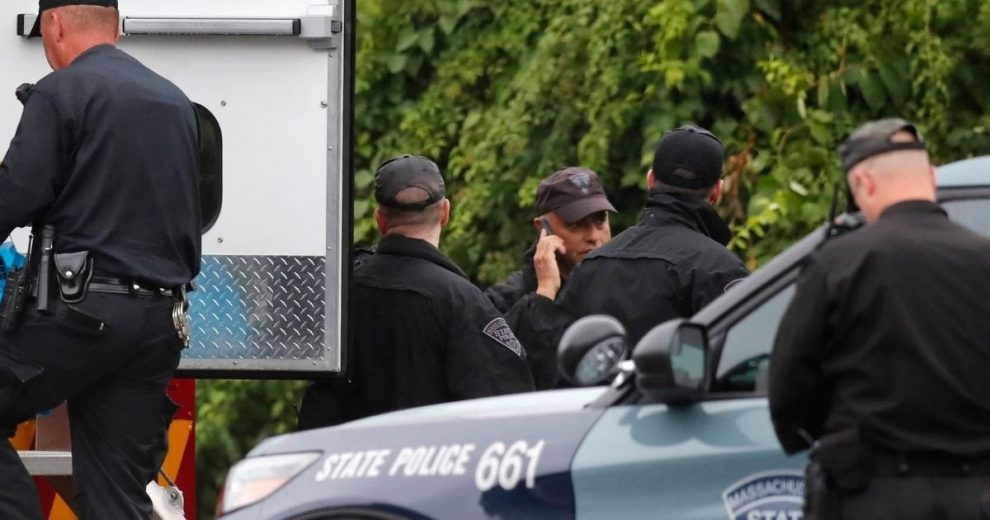 In Wakefield, Massachusetts, an armed group that apparently believes it is not subject to the laws of the United States engaged in an hours-long standoff with police in the early hours of Saturday morning.

On its Twitter account, The Associated Press reported that nine suspects were taken into custody after the incident, which closed down Interstate 95 — the major north-south artery for the entire East Coast — in both directions on the Fourth of July holiday weekend.

No member of the group — carrying long guns and clad in military fatigues — was wounded in the standoff.

Naturally, too many Twitterers jumped to quick conclusions.

(Note: All tweets below were live as of 10 a.m. EDT Sunday. The individuals who posted them might have second thoughts at some point.)

A group of eight armed men refused to comply with police officers following a traffic stop Saturday on Interstate 95 in Massachusetts. The standoff shut down the interstate in both directions. Two men were arrested and police are searching for the others. https://t.co/LjeuqQTR5W

“‘The men refused to put down their weapons or comply with authorities’ orders,’” one user wrote. “And they all somehow lived.”

And they all somehow lived.

What did he mean by that? Other users made it a bit more explicit. “Just curious @AP, but why such a poorly written article? You neglected a physical description, RACE, you know… the important s**t. We all know if they were Black men, pics, names,ages, and bullet holes would be posted,” another user wrote.

“Since no one was killed during apprehension it’s safe to assume that it was a vehicle full of white men loaded with weapons,” yet another wrote. “Just saying. Police can actually defuse situations when they want to, huh.”

“I couldn’t find pictures but I’m going to assume being white was a strong factor in them leaving the scene alive,” another take went.

And it went on and on.

Since no one was killed during apprehension it's safe to assume that it was a vehicle full of white men loaded with weapons.
Just saying. Police can actually defuse situations when they want to, huh 🤔

Just curious @AP , but why such a poorly written article? You neglected a physical description, RACE, you know… the important s**t. We all know if they were Black men, pics, names,ages, and bullet holes would be posted.

I couldn't find pictures but I'm going to assume being white was a strong factor in them leaving the scene alive.

And it went on and on:

The money’s on white guys. Any bets?

And they werent shot because they were not Black.

Haven't read the article yet, but let me guess, they were white and lived.

That last one is a bit of a portent. It probably would have helped if “WordBurn Steinem” (and we all thought “Moon Unit Zappa” was bad) had burned through a few words of the AP’s story. The seventh paragraph includes quotes from a member of the group leader declaring:

The “not Black identity extremists” part should have been a tip off that this was not a Klan gathering.

As it so happens, the people behind the standoff on I-95 streamed the encounter, which also would have given those Twitter critics a first-hand look for an answer to their question, had they bothered to put in a little effort:

“I’ve expressed to you multiple times we are not anti-government.”

An armed uniformed man speaking with MSP negotiators in the middle of a standoff on 95 as it’s being live streamed on an IG account for the Moorish Constitutional Convention Committee. @wbz https://t.co/swiYDUFnIT pic.twitter.com/2oKJqrGg5G

“We are on interstate 95 in Massachusetts…The police seen us on the side of the road with our guns secured. We were afraid so we got out.”

A man who identifies himself as Jamhal Talib Abdullah Bey is also on YouTube streaming this on the Rise of the Moors account. @wbz pic.twitter.com/PfaqzUTjxR

“We are not antigovernment. We are not anti-police, we are not sovereign citizens, we’re not black identity extremists,” a man wearing military-style equipment said in one of the videos. “As specified multiple times to the police that we are abiding by the peaceful journey laws of the United States.”

Sovereign citizens believe themselves to be citizens of their own sovereign nation-state and therefore not subject to the laws of the United States or any other country. One assumes, given the group’s title and self-description — the website describes them as “Moorish Americans dedicated to educating new Moors and influencing our Elders” — that the membership is pretty uniformly black.

According to Massachusetts State Police Col. Christopher Mason, some of the individuals involved had military gear on and were brandishing long guns and pistols when the state police came across their cars pulled over on I-95 at 2 a.m. Saturday. The vehicles were on the side of the road with hazard lights flashing, the AP reported. At least one of the two vehicles had run out of gas.

“You can imagine 11 armed individuals standing with long guns slung on an interstate highway at 2 in the morning certainly raises concerns and is not consistent with the firearms laws that we have in Massachusetts,” Mason said, according to the AP.

“The men refused to put down their weapons or comply with authorities’ orders, claiming to be from a group ‘that does not recognize our laws’ before taking off into a wooded area, police said,” according to the AP’s report.

“Mason said the suspects surrendered after police tactical teams used armored vehicles to tighten the perimeter around them.”

None of the members of the group had licenses for their firearms because they didn’t believe they were subject to the laws that would require them to obtain them.

Mason said the group was headed from Rhode Island to Maine for “training.” According to WBZ-TV, the man who was livestreaming was Jahmal Latimer, also known as Talib Abdulla Bey — the group’s leader.

Police say they’re working with prosecutors to determine the appropriate charges for members of the group.

Getting back to the tweets that snarked: “They must be white people, amirite? Only reason they’re alive.”

What’s truly shocking is that there have been plenty of object lessons in why you shouldn’t do this leap to assumptions with Twitter hot takes. The most conspicuous of these was Hemal Jhaveri, a former race and inclusivity editor for USA Today.

The “former” part was introduced after the Boulder, Colorado, mass shooting in March. Jhaveri tweeted that “it’s always an angry white man. always.” Unfortunately for Jhaveri, it was not an angry white man but an angry Middle Eastern man, which prompted her firing.

The error of Jhaveri’s ways went unnoticed by these individuals, from the looks of it. No doubt most of these tweets will come down in the days to come, assuming the individuals who tweeted them remember they replied.

However, don’t expect any kind of apology from our friend “WordBurn Steinem.” Instead of learning his/her/their/xir lesson, Steinem merely switched narratives in the blink of an eye:

When the Black Panthers came armed to California, (then) Gov. Reagan suddenly became interested in gun control. Now Rise of the Moors are playing army just like the white guys. Will the GQP change their minds about guns? https://t.co/IbOpCO1PxH via @thedailybeast

Much like love, being on the left means never having to say you’re sorry.