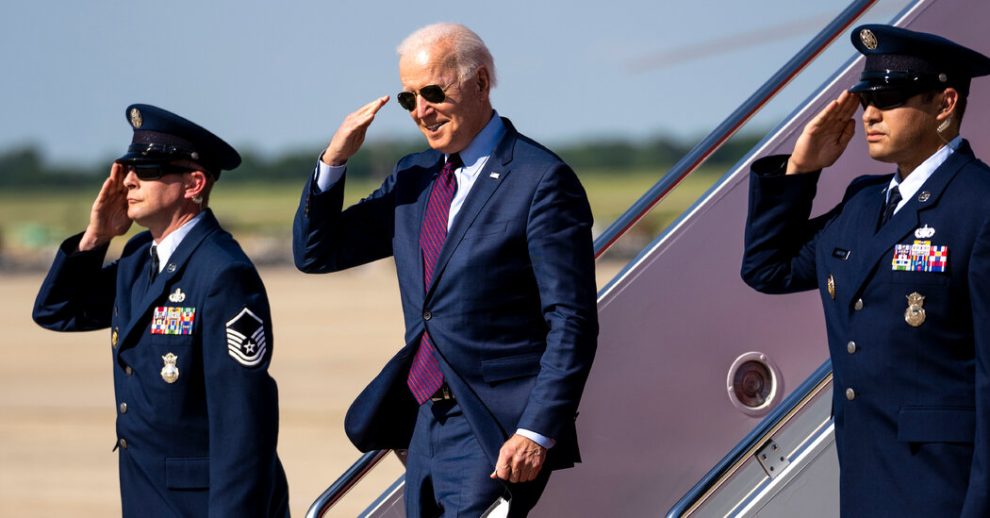 Presidentish Joe Biden is so far underwater with younger voters that he’s reached crush depth, and that has some lefties in a panic.

The ones with their eyes open, that is. The rest are deep enough in denial that concerned friends ought to stage an intervention.

We’ll get to them in a moment, but first, the ugly numbers.

They were brought to my attention Wednesday evening, when I was checking out political Twitter instead of setting the table like I said I would — occupational hazard.

There, Canadian leftie Jeet Heer was sounding the alarm about the “collapse of support for Biden among young” people, which he described as “a disaster.”

That’s in no small part, as Heer also noted, because “Under 44 was the only age group Biden won a majority of in 2020.”

So it’s true: we do get more sensible as we get older.

Snark aside, pollsters call the narrower 18-34 age group the youth vote, and taking just them into account, Biden’s support has dropped 18 points since Election Day, putting him 26 points underwater with a 55% disapprove/29% approve rating.

But wait. It gets worse.

The Atlantic‘s Derek Thompson calls Biden’s youth vote collapse “very interesting and troubling,” which is about on par with Chief Brody gently suggesting to Quint and Hooper that “you’re gonna need a bigger boat.”

Digging into the cross tabs of the latest Civiqs polling data, here’s what Thompson found: 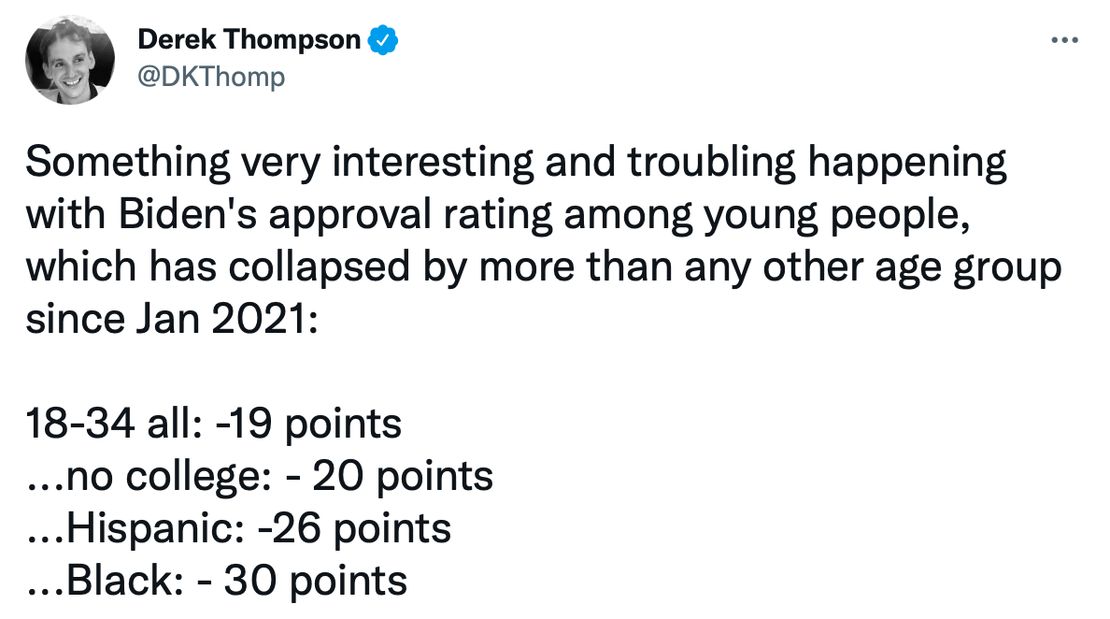 The black youth vote sits at the intersection of Always and Democrat. And yet not only has Biden lost a whopping 30 approval points with them, he’s actually well below the crucial 50% support threshold.

There’s only one word to describe this situation: unprecedented.

POLITICO admitted last week that “the current iteration of the Democratic Party has rarely, if ever, been on such shaky ground with young people,” and that the “alienated youth vote is an existential threat for Democrats.”

Most voters are concerned about major issues like inflation, especially the high price of gasoline. To that end, Biden is at least pretending to allow more drilling on public lands. PJ Media’s own Rick Moran best described it as a “political stunt by Biden to assure the American people that he’s not really a green nutcase who wants you and your family to freeze to death in winter.”

So we won’t get increased domestic oil production, but Biden’s youthful “green” supporters decried the move as an “ugly betrayal.”

“It is never a good sign when the president announces something at 5:00 pm on a Friday. But President Biden can’t get away with this disastrous climate decision,” said Varshini Prakash, executive director of the youth-led Sunrise Movement.

With the stroke of a pen, Biden managed to do nothing to help older voters and everything to further alienate younger voters.

Biden is so confused these days — for the last couple of years, really — that he’s finding it impossible to stay on message for more than 90 minutes at a time, as you’ll see in this clip:

BIDEN, 3:30PM: “I don’t know” if we will appeal the federal ruling that struck down the mask mandate pic.twitter.com/QNMzE92B15

Actually, Biden has been actively annoying pretty much everybody lately:

To give you an idea of the actual bitterness felt by young voters for Biden, this TikTok video from March is closing in on two million views:

I mean, when you’ve lost a Twitter user with a handle like “Elon Musk pay my student loans,” what kind of Democrat are you?

In Biden’s case, one wearing a massive albatross around his neck.

How long before his fellow Dems throw him overboard?