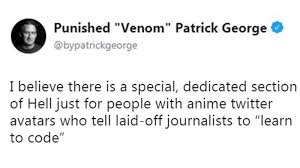 Less than a decade ago the intellectual and journalist class told recently laid off American factory workers and coal miners to “learn to code”. It seemed insensitive than, a bunch of middle aged American’s with high school educations learning to code. Coding jobs  in America are under very similar pressures as the manufacturing sector or energy sector. Pressure from illegal immigration drives down the wages of native born Americans, which corporations love as cheap labor is always desirable. Pressure from H1B visas, pressure from the looming threat of AI. Even President Obama told America’s middle america to “Learn to Code”. So when twitter deemed the same phrase hurled back at the very same journalist’s as hate speech it just seemed odd.

Twitter was quick to realize that anyone tweeting @ any of these recently laid off journalists “learn to code” would be deemed abusive behavior and a violation of twitters terms of service. Imagine if the children from Covington Catholic school where afforded the same protection.