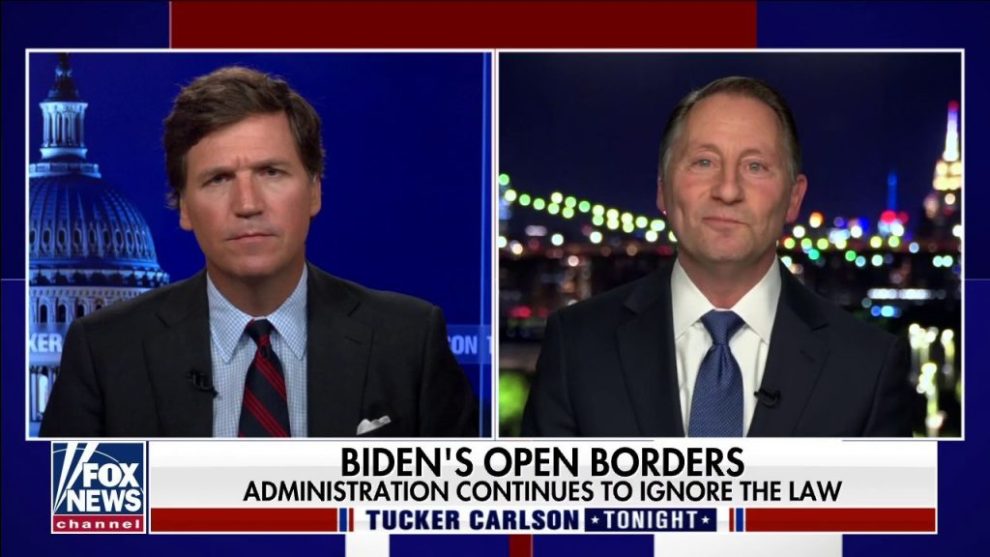 Leaked video shows migrants being transported on secret charter flights under the cover of night from southern border states to Westchester, New York.

“The government is betraying the American people,” a federal contractor told a Westchester County police officer in a conversation recorded on the officer’s body camera on the tarmac of a Westchester airport on Aug. 13, 2021.

The footage was obtained via a Freedom of Information Act request by former Westchester County Executive Rob Astorino. Reports first surfaced of such flights back in October when the New York Post captured video of the scene at the airport in White Plains, New York.

“Our government is completely out of control right now. They have lied to us. They’ve lied to the American people,” Astorino, who is running as a Republican for the governor of New York, said Wednesday on Fox News’ “Tucker Carlson Tonight.”

Astorino said he personally saw the migrants being put on a bus to a Costco, where they were “then released into cars into the community.”

The 51-minute footage of the August incident shows Westchester Police Sgt. Michael Hamborsky peppering federal contractors early in the morning with questions about the after-hours flights and why local police were not provided details.

“You’re on a secure facility here; we really don’t know anything and we’re in charge of security,” he told one of the contractors.

“This is anti all our security stuff,” Hamborsky said.

Such flights first streamed into the suburban airport from places such as McAllen, and Houston, Texas, last August, according to the New York Post. They only stopped after the outlet captured footage of the scenes back in October.

Employees of MVM Inc., a private security firm that signed a $136 million contract with the federal government last year to transport migrants around the country, were also onboard the flight, the New York Post reported.

“I’m just trying to figure out what’s what, who’s who and how I’m supposed to keep this secure,” Hamborsky told the contractors as he continued asking questions.

“We’re not allowed to have our picture taken when we get on base,” one contractor told the officer as they began showing him lanyards around their necks.

“Un-f–king-believable,” Hamborsky responded. “And who’s that by? DHS [Department of Homeland Security]?”

“Yes, and the United States Army,” the contractor responded. “You’re on a federal installation but DHS wants everything on the down low.”

Another contractor told Hamborsky: “Listen, my thing is I like to comply but technically we’re not supposed to show IDs or anything. Like I said, everything is supposed to be hush hush.”

Hamborsky asked one contractor why they were coming to suburban Westchester, which is about 35 miles outside of New York City.

“You don’t want to be in somewhere the spotlight is,” the contractor replied. “You want to try and be as down low as possible. A lot of this is just down-low stuff that we don’t tell people because what we don’t want to do is attract attention. We don’t want the media. Like we don’t even know where we’re going when they tell us.”

One of the contractors told the officer later in the video: “I get the whole secrecy and all that s–t but this is even above my f–king pay grade . . . the f- -k, you know what I mean?”

“And why? You know why?” Hamborsky asked.

“You know why, look who’s in office. That’s why, come on,” the contractor said.

“But what’s the big secret?” the cop asked.

“You know why. Because if this gets out, the government is betraying the American people,” the contractor said.

Hamborsky also asked a bus driver where he is taking the migrants, but the driver said he isn’t sure.

“They didn’t tell you where it’s going?” he asked the bus driver.

“They never do,” the driver responded.

Hamborsky later learned that some of the buses were headed to Delaware, Virginia and New Jersey.

“We’re a family-owned business,” one driver explained. “We’re subcontractors of a government contractor . . . It’s one of those things you can’t turn down because once you sign the contract, you’re a slave to the grind.”

“Now they keep saying ‘it’s just unaccompanied kids.’ Completely a lie. And that these kids were not going to go into our own area. Completely a lie. [They’re being put] into schools in Westchester, Long Island, the surrounding suburbs. So it is a complete breakdown of our system. It is a betrayal, as that gentleman said, a betrayal to the American people.”

“We have a government that continues to lie to us, that has failed in its most essential duty to secure our nation’s borders, and uphold the rule of law. When we first found out about these flights, we were attacked for demanding simple answers. They kept lying and deflecting, but this is a matter of public safety, public health and the people’s right to know,” Astorino told Fox News Digital on Thursday.

He also questioned why Democratic Gov. Kathy Hochul has not weighed in on the flights.

“And where’s our governor? Kathy Hochul is so obsessed with keeping our kids in masks and coddling career criminals that she hasn’t bothered to utter a word about these flights or bringing the crises on the southern border into our neighborhoods in Westchester, Long Island and the rest of the suburbs.”

The White House did not immediately respond to Fox News’ request for comment on the video.

White House press secretary Jen Psaki said in October that, “It is our legal responsibility to safely care for unaccompanied children until they can be swiftly reunited with a parent or a vetted sponsor.”

About 2,000 children flew into the Westchester airport from June to late October, NBC New York reported in the fall. About two million migrants overall came across the Mexico-U.S. border in 2021, according to the New York Post.

President Biden has faced repeated criticism and outrage over his administration’s handling of immigration and the migrant crisis at the southern border. Conservatives have slammed the president for ending construction of the border, limiting the ability of ICE to arrest and deport illegal immigrants and terminating asylum cooperative agreements.