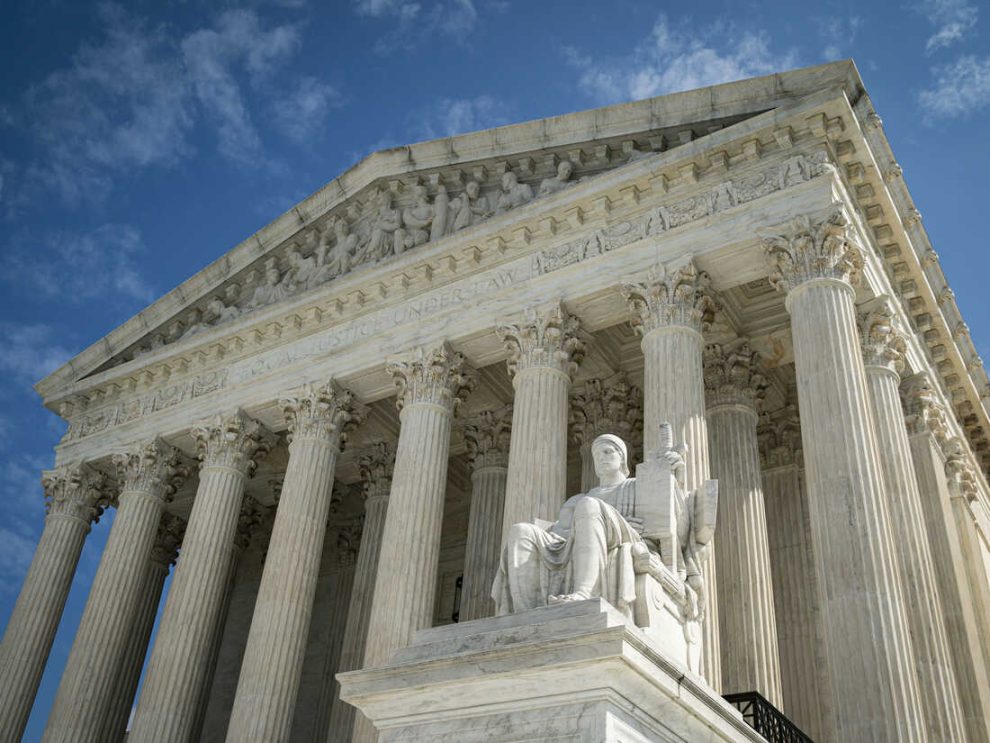 A draft Supreme Court opinion overruling Roe v. Wade has been leaked to the press in one of the greatest scandals to ever hit the nation’s highest court and a possible attempt to intimidate one or more justices to reverse their vote or to ignite a liberal brushfire to pack the Supreme Court before Democrats lose Congress in November.

“It is time to heed the Constitution and return the issue of abortion to the people’s elected representatives,” the possible draft opinion by Justice Samuel Alito reads, making the case that where the Constitution is silent, the American people govern themselves through elections and elected leaders, not federal judges. It quotes the late Justice Antonin Scalia, who said, “The permissibility of abortion, and the limitations upon it, are to be resolved like most important questions in our democracy: by citizens trying to persuade one another and then voting.” It then adds, “That is what the Constitution and the rule of law demand.”

The document published by Politico that claims to be a draft opinion appears to be authentic, but it is not a binding decision of the court unless at least five justices sign it, and this looks like a transparent and unprecedented betrayal by one of the 45 or so people with access to a draft Supreme Court opinion to prevent this decision from becoming law by scaring off moderate justices and attempting to whip the political left into a frenzy.

There are five key points to realize about this opinion, how its shocking leak could have happened, and why the Supreme Court will suffer incalculable damage if one of the majority justices switches sides.

First, what the 67-page opinion says. Key highlights include page 5:

We hold that Roe v. Wade must be overruled. The Constitution makes no reference to abortion, and no such right is implicitly protected by any constitutional provision, including the one on which the defenders of Roe and Casey now chiefly rely—the Due Process Clause of the Fourteenth Amendment. That provision has been held to guarantee some rights that are not mentioned in the Constitution, but any such right must be “deeply rooted in this Nation’s history and tradition,” and “implicit in the concept of ordered liberty.”

The right to abortion does not fall into this category. Until the latter part of the 20th century, such a right was entirely unknown to American law. Indeed, when the Fourteenth Amendment was adopted, three quarters of the States made abortion a crime at all stages of pregnancy. The abortion right is also critically different from any other right that this Court has held to fall within the Fourteenth Amendment’s protection of “liberty.” Roe’s defenders characterize the abortion right as similar to the rights recognized in past decisions involving matters such as intimate sexual relations, contraception, and marriage, but abortion is fundamentally different, as both Roe and Casey acknowledged, because it destroys what those decisions called “fetal life” and what the law now before us describes as an “unborn human being.”

The opinion discusses at length whether the Constitution as originally understood included a right to abortion, concluding it does not. It then goes on for many pages of the features of stare decisis — the legal policy of when to adhere to court precedent — and explains why stare decisis does not require upholding Roe’s right to abortion.

Then finally, on page 62 it addresses the point that whoever betrayed the court was likely trying to make with this unprecedented violation of trust: “The American people’s belief in the rule of law would be shaken if they lost respect for this Court as an institution that decides important cases based on principle, not ‘social and political pressures.’”

“But we cannot exceed the scope of our authority under the Constitution, and we cannot allow our decisions to be affected by the extraneous influences such as concern about the public’s reaction to our work,” Alito responds for the court. “That is true both when we initially decide a constitutional issue and when we consider whether to overrule a prior decision.”

Second, why the opinion is probably genuine. In an era of word processors, fraudsters can make documents that physically look like the real thing. But this is different.

First, Supreme Court opinions are dense and complex. There are extremely carefully written, and are full of citations and quotations. Experienced appellate attorneys know what they look like, and this carries all the hallmarks of that.

Also, each justice has his or her own voice. This reads like an opinion by Sam Alito. So there is every reason to believe he authored this first draft. And given that the Dobbs case was argued on December 1, the timestamp of February 10 on this draft would fit a normal opinion-writing timeframe for something of this scope.

Third, how this could have happened and why. The only people who definitely have access to this are the nine justices and their 36 law clerks — four assigned to each justice — for a total of 45 people. It is almost certain that it had to have been one of the law clerks, who would take the ultimate credential a young lawyer can achieve and instead put himself on a track to never be licensed to practice law in this nation.

Fourth, why this might not actually become the actual decision of the Supreme Court. It takes five votes on the nine-member court to make it a majority opinion. When cases are argued, the justices have a weekly closed-door conference on Friday at which they discuss the case, take a preliminary vote, and one justice from the majority is assigned the task of writing the opinion.

After that opinion is written, it is circulated to the other justices. That is when the negotiating begins, where justices say that they could join if certain changes are made, and others decide to dissent and organize that writing effort. Still, other justices join the majority judgment but write concurring opinions to emphasize some point important to them.

At any time during this process, justices can change their vote. And it happens. Often the cases do not grab headlines. But earthshattering decisions like the one upholding Obamacare in 2012, NFIB v. Sebelius, bears the hallmarks of being such a case.

This then appears to be an effort to intimidate a moderate conservative justice to switch sides, in which case this opinion would become a dissenting opinion, and a liberal justice’s opinion would speak for the majority.

The threat here appears to be court-packing. In the 1937 Jones & Laughlin Steel case, two Supreme Court justices switched from years of their own precedents to reinterpret the Commerce Clause of the Constitution, fundamentally transforming the power of the federal government over the nation.

They did this in an unnecessary attempt to stop FDR’s plan to pack the court with six new justices, for a total of 15. It was unnecessary because the plan was already collapsing, but the public intimidation convinced a couple of members of the court to virtually transform the nation.

Democrats have explored court packing over the past two years for the first time in eight decades. Doubtless many on the left will claim that now they have to do it.

Finally, the Supreme Court’s credibility is at stake to see this through. If anyone switches their vote because of this, the court will take more than a generation to regain the trust of the American people.

To the contrary, the justices should double-down. This is likely a 5-4 decision, because this betrayal looks like an intimidation tactic to get one justice to change his mind. Since the decision is in many ways out, those five should stop the pressure by all signing the latest version of it, and publishing it immediately as a binding decision of the Court. Those with dissents or concurrences can publish them later if they are so inclined. But this shameful debacle and the immediate pressure campaign it is creating should end now, with the court handing down the decision in Dobbs.

As page 65 of the leaked opinion explains:

We do not pretend to know how our political system or society will respond to today’s decision overruling Roe and Casey. And even if we could foresee what will happen, we would have no authority to let that knowledge influence our decision. We can only do our job, which is to interpret the law, apply longstanding principles of stare decisis, and decide this case accordingly.

We therefore hold that the Constitution does not confer a right to abortion. Roe and Casey must be overruled, and the authority to regulate abortion must be returned to the people and their elected representatives.