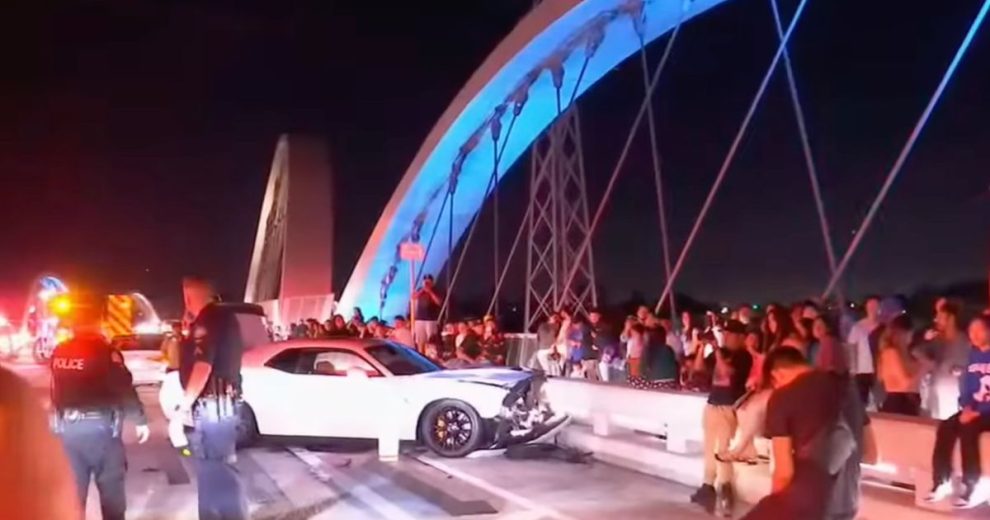 Welcome to the West Coast, Messed Coast™ report, your weekly rundown of the news of the most beautiful states in the union …before autocratic Leftists decided to start charging ridiculously high prices for living in their states.

Our first item involves the opening of a more than half-billion-dollar, federally subsidized bridge linking the Boyle Heights neighborhood to downtown Los Angeles. The Sixth Street Bridge, or Sixth Street Viaduct if you prefer, opened July 9 and 10 amid much fanfare. Drivers were thrilled their old path to downtown and work was back! The bridge features pedestrian walkways, but pedestrians were given carte blanche for the first couple of days before cars were allowed to use it. Indeed, they climbed the arches framing the bridge and other antics. See the video below.

And then the pedestrians, risk takers, and lawbreakers didn’t leave.

And Mayor Eric Garcetti, who managed LA into the lockdown hopelessness and is bereft of ideas, did nothing about it except close it over and over. Instead of enforcing the law and clearing the bridge of lawbreakers who kept wading into traffic, Garcetti ordered the bridge closed to everyone. Then, after allowing the take over of the bridge, the city spent $706,000 (not a typo) to clean up graffiti. Then the LA City Council hit upon a “great” idea for a federally subsidized bridge meant to transport people in vehicles quickly from one side of town to the other: install speed bumps. It’s a metaphor.

As California GOP leader, Jessica Milan Patterson wrote, “In @GavinNewsom’s California, taxpayer money is spent on projects that will never see the light of day or will get shut down because Democrat policies enable criminal behavior. @CA_Dem is why we can’t have nice things, literally.”

In @GavinNewsom's California, taxpayer money is spent on projects that will never see the light of day or will get shut down because Democrat policies enable criminal behavior.@CA_Dem is why we can't have nice things, literally. https://t.co/pBfwT0iXY5

The half-billion-dollar bridge that replaced the iconic, though seismically unsteady, 1932 version of the bridge. The old bridge was seen routinely in movies and TV shows such as “Grease” and “Terminator 2: Judgment Day,” “The Mask,” “Beverly Hills Cop III,” “LA Story,” “Repo Man.” And it was featured in a movie called “Biker Boyz.”

You know. All this shit talking about what local raza Is doing on the new $$$$$$$ million dollar 6th street bridge. Car crashing, foos climbing it, barber giving fades. I'm fed up. Like fuck that. It's our city. And it's their community bridge. Shut the fuck up and let LA be LA.

When the bridge was replaced and re-opened a couple of weeks back it seems everyone with an Instagram page needed to produce their moment on the bridge. And all hell broke loose.

Updated: Police have announced that LA's Sixth Street bridge will be closed "until further notice" in the wake of continued illegal activity in recent days. https://t.co/SHGfTXLJu7

It became a stage for DJs, Instagram influencers, and lowriders.

This man thought it would be good business to risk life and limb to give haircuts in the middle of the road.

One reporter said, “we’ve been waiting for six years to use this bridge. We’ve paid $600 million and we can’t use it.”

The yellow jersey mafia can though.

There is no such problem – yet – on Portland’s newest bridge named for Congressman Earl “Bow Tie” Blumenauer. The Portland Democrat, who has never had a real job in the private sector and subjects Portlanders to his better-than-thou sniffing while twirling his bow tie, likes to ride bikes. Earl got his bike and pedestrian bridge, and it opened in Portland on July 26.

Days later, the annual naked bike ride took place. This full frontal rudity begins hours earlier as the naked bike riders take their daylight rides throughout the Portland neighborhoods to regale children with their dangling appendages. Yes, there is a law against public nudity for the express purpose to titillate and shock, but the cops block traffic for the ride, so arresting people is, well, unlikely.

According to the titillating tweeter below, the naked bike ride is an exercise in selflessness on behalf of the climate and for body positivity.

Or, the alternate explanation for the ride is that riders are narcissistic fetishists. Tomato, tomahto.

Meanwhile, in Washington State, it’s summer. It’s been hot. Therefore, Governor Jay Inslee, who apparently has never spent much time in Washington during the summer, declared it a climate emergency or something. “This is the second summer in a row we’ve baked,” he lied. “The summer before that we were choking on forest fire smoke,” which he helped create. “We’ve got to cut to the heart of this problem and attack it at its source, which is carbon pollution,” he lectured.

Washington Gov. Jay Inslee: "This is the second summer in a row we've baked. The summer before that we were choking on forest fire smoke. […] Our salmon are dying. […] We've got to cut to the heart of this problem and attack it at its source, which is carbon pollution." pic.twitter.com/GSEET0T9uv

It turns out that when Leftist eco-nuts fail to allow forest management by getting rid of dead and dying trees and dried brush underneath trees, for example, and then letting forest fires burn with abandon, this huge carbon sink – we’ll call it a forest – releases all of the evil carbon into the air. In short, their lack of forest management is more polluting, not to mention deadly.

The Orange County restauranteur who opposed lockdowns, masks, and forced vaccinations is suing his landlord for ending his lease. He alleges his landlord started beefing with him over an American flag he put up on his restaurant. Things got worse when Tony Roman, the owner of Basilico’s, became the face of anti-Covid lockdowns.

His billboard reading, “Leave the Mask, Take the Cannoli,” won him national acclaim with freedom-loving Americans.

"Leave The Mask Take The Cannoli," reads the large sign from Basilico’s Pasta e Vino, atop a flower shop just blocks from the popular mall https://t.co/0t4V8hJE2W

But, his landlord, not so much. Roman says George Soohoo is dumping him due to viewpoint discrimination.

So it was surprising that the Oregon open-borders group CAUSA folded its tent and disappeared.

Oregonians for Immigration Reform (OFIR) alerted the West Coast, Messed Coast™ report that “after 27 years of weakening immigration enforcement under the pretense of ‘immigrant rights.’ By redefining illegal immigration as an ethnic right and labeling any opposition as racist,” CAUSA is closing its doors. But it has less with Joe Biden doing their jobs for them and more to do with its inability to come to an agreement with their labor union.

What a legacy. The Salem Statesman Journal reported on the group’s “accomplishments.”

Will a new group emerge featuring some of the old faces at CAUSA?

That’s your West Coast, Messed Coast™ report for this week. Until next time.