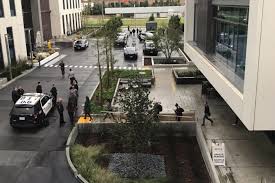 2ND UPDATE: The LAPD has taken a suspect into custody, and the active-shooter lockdown at Netflix’s LA HQ has been lifted.

The suspect did not have a gun and never entered the Sunset Boulevard offices of the streamer, police tell Deadline.

Law enforcement officials say they received a call at 3:53 PM PT claiming that an individual with a gun was on the Netflix lot at Sunset Bronson Studios at Sunset and Bronson Avenue. Officers immediately were deployed to what quickly became a very tense situation.

However, despite evacuations of employees from Netflix and the KTLA-TV studios next door, there was no risk, the LAPD confirms.

“We received a tip about a potential law enforcement incident,” Netflix themselves said in a statement that went out to staffers as the situation was still being assessed. “Police are conducting a sweep of the lot out of an abundance of caution. There is no immediate danger or threat to our employees. Feel free to share this information with your loved ones.”

Police are wrapping up their sweep and now leaving the area. Sunset is reopening to traffic on this rainy Thursday.