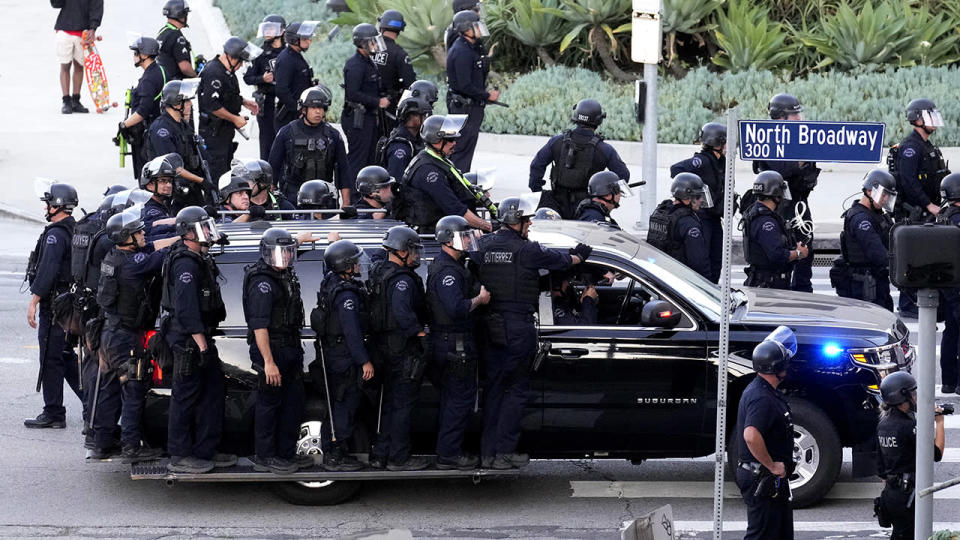 A California man was arrested and charged with attempted murder after he allegedly attacked a police officer during a protest of the U.S. Supreme Court’s recent abortion reversal, police said.

Michael Ortiz, 30, and Juliana Bernado, 23, were among those arrested during a clash with police officers in the downtown Los Angeles area Friday as people gathered to protest the overturning of Roe v. Wade, Los Angeles Police Department Chief Michel Moore said.

“The vast majority of those involved were peaceful and law-abiding, however, a much smaller group of individuals took to the streets with the intention of creating chaos and destruction,” the LAPD said.

Authorities said as the protests stretched into the night, members of the crowd began “throwing fireworks and other makeshift weapons” at the officers.

Ortiz was allegedly among those members and stands accused of throwing a makeshift flamethrower at an officer, who had to be treated for burns. He was charged with the attempted murder of a police officer, KTLA reported.

At some point in the night, Bernado allegedly attempted to take an officer’s baton and was subsequently taken into custody, the New York Post reported. She faces possible charges for resisting arrest.

“I condemn the violence against officers that occurred last night and into today,” LAPD Chief Michel Moore said in a news release.

“Individuals participating in such criminal activity are not exercising their 1st Amendment rights in protest of the Supreme Court decision, rather, they are acting as criminals,” he added. “The Department will vigorously pursue prosecution of these individuals.”

I’m grateful today’s events were largely peaceful. Unfortunately some chose to enter the freeway posing a serious risk. Later a much smaller group fired pyrotechnics at officers. Our people strived to facilitate demonstrations while defending our people from dangerous assaults.

The LAPD said it encourages its citizens to peaceably assemble to protest and welcomes political demonstrations.

Authorities in major cities have had to respond to similar protests, including unrest in New York, Washington, D.C., Portland, and Phoenix. The NYPD told Fox News Digital that at least 20 people were arrested on Friday night after protest demonstrations turned violent.